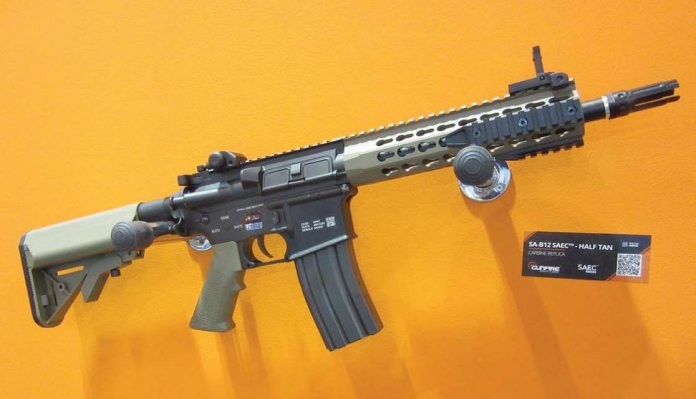 When I first started attending IWA, six years ago, Redwolf airsoft really were the flagship of our industry, but since then I’ve seen a sure but steady influx of airsoft, and airsoft related kit and each year the show just gets better and better for our industry; airsoft now dominates a good part of Hall 7, and has expanded into both Halls 7a and 8 and this expansion shows absolutely no sign of stopping!

My first meeting of the show was with a thoroughly great team who are also very good friends, and I’m going to come straight out and say NUPROL blitzed it AGAIN! With a bigger stand than even last year, and with the entire team ‘suited and booted’, they looked every bit the professionals (especially the ever-dapper Danny!), and this is absolutely superb, a real business-like boost for airsoft in general! Following the launch of the new RAVEN pistol range at the back end of 2017, the guys were once again rocking in Germany, and were constantly busy, the impressive stand quite literally rammed most of the time. They seem to have new products every month at the moment, and speaking to Ross it seems that there is WAY more yet to come, including their new distributorship of FABARM shotguns. In our current economic climate, it is just stunning to see a British company doing so very well on the worldwide market.

Next up was Evolution Airsoft, best known as a distributor of fine airsoft replicas, accessories, and consumables in their native Italy, things are moving on at a frantic pace for them. They had a number of really first rate ‘Cerakote’ finished AEGs on show, licenced with the likes of ‘Tango Down’, ‘ZM’ and ‘ADC’, and confirmed that “things are in the pipeline” for some new products of their own, including the very first airsoft pistol that will become a real firearm!

G&G also always have something new to talk about and this year was absolutely no exception; there were two new, now in-production, CQB AEGs, in the form of the ARP9 and the ARP556, both super-compact with PDW style sliding stocks, a slightly longer PDW15 and a super ‘larger calibre’ offering in the shape of the TR16308 which will be a dedicated, out of the box DMR. They have also added a new ‘RONI’ style pistol carbine to the line, which looks absolutely ace! To put the icing on the cake, they also had TWO new bolt-action Lee Enfield rifles on show, one of which is the sniper variant; both operate from a gas tank that mimics a filled stripper clip of cartridges and fits into what looks to be almost a real .303 magazine! With the new ‘AR LMG’ on show, it certainly looks like it’ll be another exciting year for them, and us!

My old friends from ICS had their usual fine stand this year, and like other manufacturers, continue to tweak and refine their already super AEGS; as well as an extension to their new ‘XFG’ handgun line, including a ‘Makarov’, they were showing off a really nice looking ‘light tan’ finish and some excellent new rails.

Classic Army were just across the way, and once again, seem to have upped their game in terms of quality and appearance; they also had more standalone accessories and rails than ever before with both KeyMod and M-Lok in evidence, but of course, it was their new ‘DT4’ that raised some eyebrows! Luckily they were also showcasing some new ‘Bizon’ designs and their ENF series too.

ASG are always ‘loud and proud’ at IWA, and now my mate Ben has joined their ranks there’s even more reason to visit! In the UK, Paul and Jake have done such a great job already, and with Ben now fully on-board, it looks as if they are ready to plough ahead in 2018! Big news included getting ‘hands on’ the new HERA Arms/ICS/ASG collaboration in the form of the CQR, which although stunning both internally and externally, I feel will be a bit of a ‘Marmite gun’ for many. There were also some cracking new pistol models, and of course their ‘CZ EVO and BREN’ projects continue to evolve!

LCT; whilst their display at the show was of largely existing products, they did have some great new rails and accessories to drool over, as well as their new BBs, and much of the talk was of their new EBB recoil system. This new system (no release date or price yet sadly) is due to be a drop-in upgrade for their existing AK range, which is pretty darn exciting!

Talking of ‘recoil AKs’, a trip to meet with BOLT revealed their own new take on this, and what a take it is! Although still in pre-production form their ‘AKSU’ looks to be nearly there, and oh, what a nice kick it gives in the shoulder, as I discovered to my joy. Tech just keeps on rolling forward and another superb model that caught my eye was the shell-ejecting RARE ARMS AR; whilst not a skirmish gun, this is still an absolutely stunning piece of engineering and gives you a full travel bolt group, with the CO2 stored in the pistol grip! The operation seems to be mega-efficient, so these guys are really one to watch.

As usual, Redwolf were present in force, leading from the front, as always. With some stunning new ‘Airsoft Surgeon’ replicas to drool over, including Clarence’s rather wonderful ‘cutaway’ creations, their stand, as always, was absolutely chocka- block with airsoft goodness and innovation but one thing that particularly caught my eye was the new range of ‘Avatar’ grenades, which look superbly, filthily cutting edge. Of course, the real showstopper for many of us was their own Lee Enfield, but their continued collaboration with Agency Arms means that there are again a few absolutely gorgeous looking pistols on the way soon!

Cream of the crop

Before I wrap up, as usual I have to make a couple of ‘honourable mentions’ of things that I saw that I thought to be first-rate. Gunfire were showing off a number of their custom projects and these were really superb, and their continued investment in the SPECNA ARMS brand is really starting to pay dividends. VFC were showing off their new VIRGO kit, which is basically an M4 conversion/ performance kit, including parts like brushless motors and drop-in digital triggers which are again certainly unique; King Arms continue to build their range of pistols, and once again were showing a very, very respectable looking ‘RONI’ kit, licensed by CAA. Umarex, it has to be said, pulled a bit of a blinder with their G3 GBBR, which ain’t going to be cheap but I’m going to bet there’s a few out there that will find the cash for this stunner!

All-in-all, 2018 at IWA was another great year for airsoft, and I am already looking forward to 2019!