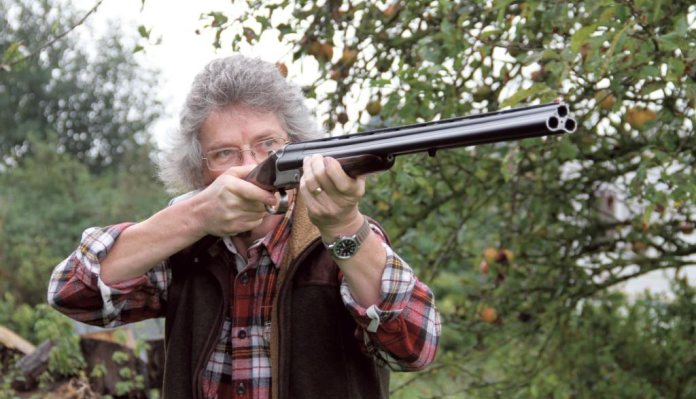 Every now and then a rifle, shotgun or air rifle comes along and just makes you smile. There may not be a need for it, it may be unconventional or just odd but there is always a place for the unusual but desirable gun in anyone`s collection.

A triple barrelled gun, rifle or shotgun does not immediately come to mind as your ‘go to, must have’ but I love the fact that there are manufacturers out there who take the trouble and time to offer something just that bit different and in this case, 50% extra different, but still achieve a quality product and fully a functional and reliable gun for actual shooting, not just to impress your friends with.

Triple barrelled guns are not new, there have been many old British makers in the past, but certainly not mainstream, which makes the arrival of the Akkar Triple Crown all that more special and unexpected. It is available in .410 to 12g calibres, so a great choice for all manner of applications and has barrel lengths of 28- or 32-inches, although some models will be limited stock. You also have a traditional walnut stocked, slivered action version, as well as a camo clad wildfowl version, which is proving very popular.

I can’t get the smile off my face – honest! It’s totally me; a bit weird and totally unnecessary, but just fun and does not take itself very seriously. Sure, it will be a second gun but just because it’s not the norm does not mean it does not handle, point and swing, as well as pattern well and the pattern tests certainly confirm this.

Being a triple barrel, you would think it would be heavy and a bit clumsy, but it’s none of these. Colleagues who also picked up and used the Akkar where amazed at its agility, this is partly due to the smaller gauge of this test gun being a 28-gauge. However, due to the configuration of the side-by-side and then upper barrel, the depth of the gun is no more than would be a standard over and under gun and when sighting down the rib it feels like an O/U.

You also have a great finish to the Triple. Akkar have sensibly kept it simple and it is far better for it. The action is plain brushed steel and the walnut a good grade with colour and figuring and the barrels a smooth satin blued finish. Personally, I think any engraving would spoil it.

The stock is pretty standard here, but still well-proportioned. The forend, due to the barrel configuration of the bottom barrels, i.e. side-by-side, has a forward push button latch. To release, a polished steel button is depressed, which is guided by a brass collar and un-latches the barrel lug. It is not stiff at all but still very tight, which is reassuring. You have a dark figured walnut, enhanced with small panels of chequering that are quite raised, so actual grip, rather than being just for looks.

The rear butt-stock is again pretty standard, with a medium height comb and a small amount of cast. I really like the pistol grip, due to the generous proportions and nicely angled rake and again good cut chequering. Better still, is the palm swell that feels natural and not over-powering and certainly fills my palm and allows the trigger finger to sit correctly and provides an unstrained hold.

The colour and figuring on this model is really nice, dark, rich and some lovely figuring through the stock, all finished with an oil rub. The recoil pad is fixed and black rubber and the length of pull is 14.25-inches, so actually a little short for me.

This is your typical monobloc construction, with the forward locking lumps that locate into the large cross pin that acts as the hinge pin. To the rear is the slot lug that accepts a similarly large cross bar that slots precisely into this large rear lug. The barrels are attached to this ‘monobloc’ at the chambers and the join is cleverly disguised by a nice continuous chain link engraving. It is a solid, heavy action, which I like and I especially like the brushed finish and just a small engraved Triple Crown logo to the underside.

The top lever, to open the action, is similarly brushed steel and has an opened profile that actually affords a better grip, compared to chequering alone. You have a tight action opening and a reassuringly mechanical clunk as it locks securely. The safety is nonauto, again I like it and has a raised circular operating button for rear as safe and forward, exposing a red dot, for fire. The trigger has a gold washed finish and is smooth with a large but nicely shaped trigger guard.

There is only one trigger blade and the firing order on the Triple Crown is right, left and then top. There is no way to change this, so if you want to shoot the top barrel first you have to shoot the other two first. That’s why the barrels are multi choke, more later. It is designed to give a more reliable three-shot capability than a semi-automatic would. The first sequence is actually quite quick but you do need to allow the trigger blade to return to station for the subsequent shots. No problems at all and a good trigger pull, albeit quite a heavy feel to the whole firing process.

What can I say! Every time I see the end of the Akkar I chuckle; you thought a double-barrelled shotgun looked intimidating!

The barrels are non-ejector, as expected, and the fired cases protrude sufficiently to extract; if all three are fired, it’s a handful! The external finish is a smooth satin black that is a perfect complement to the satin brushed action. You have a thin 7mm ventilated rib and single red Day-Glo sight at the muzzle end. You also have a sling swivel attachment soldered to the underside, so a sling can be used, which makes sense to me, as this is a quirky gun any way and I would use a sling.

This is the 28-gauge model and has 28-inch length barrels, whilst other calibres have 28- or 32-inch lengths, all multi choke. It is chambered for 2¾-inch cartridges, which has always amazed me why no one makes a 3-inch case, to exploit the real potential of this round?

To add versatility, the barrels are multi choked and five (or a complete set) are suppled. Due to the sequential firing, you can set up the Triple with open chokes first and then getting tighter for normal use in the field, or swap around for tight and getting more open for incoming game. You have choices, three of them!

It’s a quick shooter on clay and game, so I set up three pattern boards for each barrel and two differing 28g shotgun shells to see how the chokes changed the shot patterns.

First up were the Hull High Pheasant loads. These 28-gauge cartridges are your standard 70mm length, with a red plastic case and loaded as a fibre wad load. I had the 23-gram No. 7 shot load, so a good all-rounder.

At 30-yards, the Cyl choke had a total of 206 pellets strike the board, with 141 No. 7 shot hitting the outer 30 circles and 65 in the inner 15-inches. Second barrel on ¼ choke and a total of 243 pellets this time, with a very even spread of 136 in the outer portions and 107 in the inner sectors. The third barrel and ½ choke and I had a total 236 pellets hit, so less than the ¼ choke but spread totally even at 118 pellets inner and outer. The missing pellets were off right, due to high winds, still superb pattern and great load from Hull.

Second up were the NSI shells from Italy and distributed by Edgars. I had the 70mm blue plastic cased load with plastic wad and 21-grams of No. 5 shot. Less pellets and bigger size, so a hard hitter. On Cyl choke, barrel one I had a total of 114 No. 5 shot hits, spread with 74 outer strikes and 40 pellets in the 15-inch circle. The second barrel and ¼ choke and I now had 146 pellets on the board and a superb even spread, again, of 73 inner and outer sectors and very even, lovely.

The final, third barrel with the NSI had a total of 148 pellets with 65 No. 5s in the outer 30-inches and as expected a denser 83 pellets in the central 15-inches, with good even spread again.

Hands up, it’s not for everyone but I love it, especially in 28-gauge it’s a perfect combination in my view. The weight is just right to give very good handling, yet enough to make the small 28-gauge’s recoil almost non-existent. This is a fun or very practical woods, woodcock, squirrel, rabbit, vermin or roosting pigeon and rook gun in my view.

True, you will probably not use the third shot much but it’s nice to know it’s there if you need it.