Reloading: The Power of Electricity 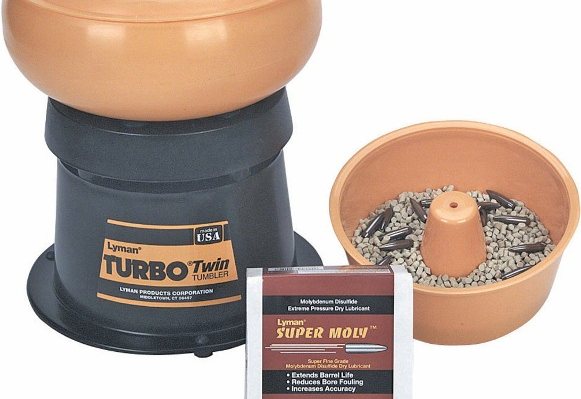 Remember the old joke about ‘batteries not included’, well it seems that almost everything has now been electrified. Indeed, in our house we now have so many appliance chargers that they all have to be labelled. So what has this new fangled ‘electric’ done for handloading here in the UK? I’ve qualified the location because much of our kit comes from the USA, home of 110 – 120 Volts at 60 Hz and not all of it is available for use here. Yes, you can buy a transformer but the difference in frequency can play havoc with some digital equipment.

According to my modest records the earliest electrified handloading kit was, unsurprisingly, the case cleaner/polisher.

Hand operated models had been around for some time, looking similar to scaled down butter churns. However late ‘40’s hobbyists constructed electric motor driven tumbler devices not unlike the Thumlers Tumbler, mostly operating on the washing machine drum principle. Whilst the concept of electronic weighing was being explored as far back as the ‘30’s it was to be another four decades before ‘digital’ readouts and sufficiently accurate load cells were combined to create realistically priced electronic scales to serve our needs! From the turn of the previous century until about 25-years ago, powered reloading machines were the preserve of the major ammunition manufacturers. Indeed, arms and ammo manufacturers such as Springfield Armory and Frankford Arsenal were the true pioneers of powered mass production, decades before Henry Ford thought of the Tin Lizzie.

At the top of the handloaders food chain there are now partially powered reloading machines such as the Dillon1050. Out of the factory they still need some hand feeding and a pull of the handle but many enterprising reloaders have used additional electric motors and PLC’s to fully automate them. Many of our gauges, measuring equipment and trimmers now include options equipped with plugs or batteries.

Furthermore, some kit only exists because of the existence of these magical volts, the ultrasonic cleaner and chronograph being good examples.

Electrified kit generally offers three interrelated benefits. The first is repeatability and potentially improved accuracy. An automated system will keep doing the same thing time after time. Then we have their labour saving qualities – whilst production (as opposed to processing) kit should never be left unattended, the powered machine can take the strain. Finally, they can offer more reliable memory and record keeping.

Are they worth the extra cost? If you only stuff a couple of hundred rounds of a favoured recipe every year then most of them are hard to justify. However, if volume or variation is your pleasure then power will improve your life. Whilst there can be few of us who need the huge production potential of a fully automated Dillon 1050, the rest of the kit is well worth a second glance.

As an avid reloading experimentalist I can justify owning an example of every bit of kit that exists. Sadly, a sensible wife and the limits of budget and space mean that I have to be selective. Chronographs, turbo tumblers and an ultrasonic cleaner are a given since non-powered examples are not an option. My trusty old Oehler 33 does most of the work but an understudy is on my shopping list, probably an Oehler 35 Proof. Do you need a chrono? If you deviate from a known standard load, experiment, or hunt then the answer is yes, either as an exclusive owner or, more economically, a club utility. For polishing, my Lyman Turbo 1200 does most of the work with a separate moly kit based around a Frankford Arsenal bowl and separator on another Lyman vibrator unit. If you fire your brass more than once then you’ll need one too. If you propose to moly coat pills then you should add a second tumbler kit to your shopping list. As for the bubble bath, regular readers will remember that I’m the proud owner of a sub £100 Lyman Turbo Sonic 2500 Ultrasonic clone from Maplins. Hardly a luxury item, but not essential!

WHERE THE CHOICE IS YOURS

Of the remainder, the weighing scale must be the most obvious candidate. If we reload we must have a weighing device of some sort. However, there is an important difference between the regular beam scale and an electronic model. One is a comparator; the other gives a direct reading. The beam is set to a given figure and then allows you to compare your subject with that setting, fine for most non-repetitive applications like checking the output from your powder measure. The electronic scale gives an actual reading – ideal for batch weighing of cases or bullets.

If you can only afford one then a good electronic model is the ‘weigh’ forward. I’ve got an ancient Salter Brecknell, a brilliantly portable little Frankford Arsenal DS-750 and an obsolete Acculab (I think it’s now replaced by a Sartorius) accurate to 0.02 of a grain. (It stays in the loading room as it’s temperature sensitive). The GemPro-250 looks similar and claims the same performance.

Combination electronic scales and tricklers or powder measures are the relatively new kids on the block. I’ve tried several, but own none as yet. At the big bucks end there is the RCBS Chargemaster Powder Dispenser (perhaps the name is a pun on the price?) together with the similar Lyman Gen 5 and Gen 6 Digital Powder Systems and the Hornady Lock-N-Load Auto Charge. I liked the Gen 5 system the most. Trickler scales are a good compromise for small batch production. The Lyman Accu-Touch 2000 looks quite neat but I’m not sure if it’s available in the UK.

Case trimmers have been offered with plug-in power for many years. Indeed, I’ve had a Lyman Power Trimmer for some time but do I use it? Hardly ever! I mostly use a bog standard Lyman Universal screwed to the bench as well as an RCBS Trimmer with my most commonly used case retaining plates. It’s faster than the Lyman but tiresome when changing calibres.

Adding volts and LCD’s to Verniers and micrometers was a brilliant idea. I was always surprised by the number of students on handloading courses who could not read the conventional linear or barrel vernier scale on a measuring instrument! I’m so ancient that I was raised on slide rules perhaps that helped. Power has also enabled easier gauging with lasers, but that’s a subject for another month.