Airgun hunter: Into the Woods 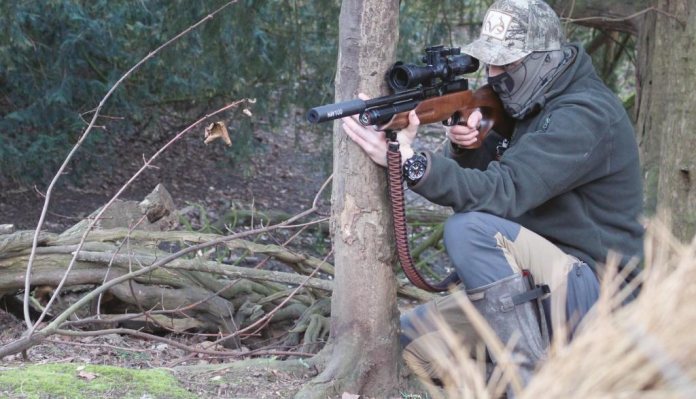 With the days now lengthening, I have much more to time head into the woods with the airgun after work. As much as I enjoy my job, it certainly makes the day go faster, knowing that when five O’clock comes I’ll be out the door like a flash and, in next to no time, sitting under a tree in the warm sunshine. The wood I was planning on shooting had seen lots of bark damage, caused by the large squirrel population. For some reason, they just seemed to be rife in there. Maybe just because it was slightly smaller than others on the estate and squirrels were more condensed, causing more focused damage. The mix of conifers, beach and oak trees could better suite their needs than other kinds of woodland, so that also could be a contributing factor. Something had to be done.

Once in the wood, I found myself a nice pine to sit against. It was pretty much ideal, as it offered a great vantage point across the section of the interior with the most mixed trees. Everything behind me was conifers and I knew that trying to ambush squirrels in the thick cover would be next to impossible. The elder, beach, oak and pine were still pretty bare, holding only very small buds and leaves, which was much easier hunting than the thick jungle to my rear.

My gun of choice was the HW100KT. There were a few reasons for this, besides its laser-like accuracy. The carbine version is very short, so when in thick woodland it’s handy not to feel like you’re carrying a gatepost. The gun also boasts a 14-shot magazine; so, should I fluff a shot, there’s always the assurance of a swift follow up. Lastly, this one is in .177 and its flatter trajectory is my preference in these surroundings, as I am far less likely to clip a twig than with a .22, which takes some thinking out of the equation for me.

My first target didn’t take long to pop out from its hiding place. My attention was drawn by a branch moving unnaturally and, when I see this, my first thought is ‘squirrel’. They seem to affect branches in a very different way to pigeons and other woodland animals. They appear far more boisterous in the way they move, creating noise and disturbance. This is great for me, because it points out their location, without me having to do any work. I kept my eyes peeled and saw a flick of a tail further up the tree. I had no choice but to break cover for this guy and, in doing so, I gave away my location, but squirrels often stay put, thinking they can’t be seen.

I stalked my way around the tree as silently as I could, but this animal was wise, and every time I got into a shootable angle he scampered around the other side. I could be at this all day, but I had heard of a trick, where you take off your jacket and prop it on a stick. This fools the squirrel into thinking that there are two people, so it’s more likely to stay where he is; so, that’s what I did. My Ridgeline fleece would hopefully serve me well. I dropped it over an upright stick and tried again. Would you believe it? The squirrel halted, not moving an inch. I upped the rifle and held the crosshair a fraction behind the eye and squeezed the matchgrade trigger. The squirrel tightened into a ball and dropped to the ground before thrashing in last year’s leaf fall, confirming a well-placed head shot. I am still unsure whether the jacket was the reason for getting the shot or not; some more testing on this theory is needed for me to be sure.

I returned to my position, to resume the wait once more. It was great to be out in the heart of spring, listening to the birds and absorbing the warmth of the air and winter now felt an age away. Another squirrel caught my eye, it was tucked in a tangled mess of branches, perfectly camouflaged; well, almost. Its give-away was the tail movement as it caught the lightest breeze at the top of the tree. I eyed him through the Hawke scope and could just make out an eye and an ear, peering at me from behind its cover.

There was a clear line of sight from me to the squirrel and I knew that I could pull off the shot. The crosshairs were fixed on that spot between its eye and ear. I was as solid as I could be, and my seated position was like a rock and I have a few years of Field Target shooting to thank for that. The now familiar crack of the Air Arms Diablo pellet connecting with its skull sounded out throughout the wood once again. It gripped on and hung there for a few seconds, before the muscles relaxed and it dropped to the carpeted floor of unopened bluebells. I knew it was dead, so let it be and held my cover; perhaps there were more unseen opportunities like that.

I heard the very familiar sound of a pigeon landing above me, I cranked my neck up to have a look but saw nothing. Cautiously, I shuffled my position in an attempt to see around bits of foliage that were possibly obstructing my view. Then I saw it, a tail feather giving the bird away. Now I could see it I and move for a shot. I closely watched its body language. They make it very obvious if they are put on edge and know something is off by becoming fidgety. Regularly they will stretch their neck out, showing that brilliant white bar and that’s when I know when to freeze. Once the bird looks settled I continue to move. That’s what happened on this occasion; in all honesty, most of the time they just fly away if they are suspicious of anything but sometimes I get lucky.

There was a fair bit of elevation on the shot, but nothing out of the ordinary for woodland conditions. Thankfully, there was yet again a clear path from me to my quarry. I decided to go for a head shot, the safest bet. If I miss, the bird flies away unharmed and if I don’t it’s a near guaranteed instant kill. While raising the rifle, it showed me that white neck bar; I was almost on aim, so risked those last few inches.

I didn’t want my arms getting tired while I froze their waiting for it to go back to normal. That would just cause wobbles and a possible fluffed shot or an injured bird, however, it sat tight, thankfully. My shot was unsupported, but I was still steady. I watched through the scope while I squeezed the trigger. The sunlight just caught the skirt of the pellet in flight (I love it when that happens) before it connected, causing the usual flapping associated with a head shot. It dropped down on a bare patch of earth under a tree and settled.

Not a minute after my first pigeon of the day, a second landed in almost the same spot. I went through the same process as before, watching the body language of the bird. This time, the head was obscured by the body, so I decided that a heart and lung shot would be best. Things didn’t go exactly to plan this time. I thought the shot was good, the bird came down and landed in a similar place to the last but was still alive. I had only managed to break the wing bone. It looked up and began to get itself together to walk off. However, I had already re-cocked and was back on aim, putting a swift finishing shot into it.

A great benefit in using a familiar gun is muscle memory! It becomes second nature to reach for the same place for the cocking lever. It’s why Air Arms speed shoots at the game fairs are always won by people who own their guns and use them regularly; as they become an extension of themselves.

The afternoon wore on and I managed to rack in a fair few more squirrels, coming out for a last feed before the warmth of the sun disappeared for the night. Although I was happy with the bag, I knew a lot more needed to be done about the high numbers in the wood. The Cornwall Red Squirrel Project have since sent me a feeder and I am baiting up, ready to put some real numbers away. I’m looking forward to setting up a hide and waiting to see what comes by. I am led to believe that this is the most effective way of squirrel control. With the nights shortening and the days lengthening, this is more bad news for the greys around here.