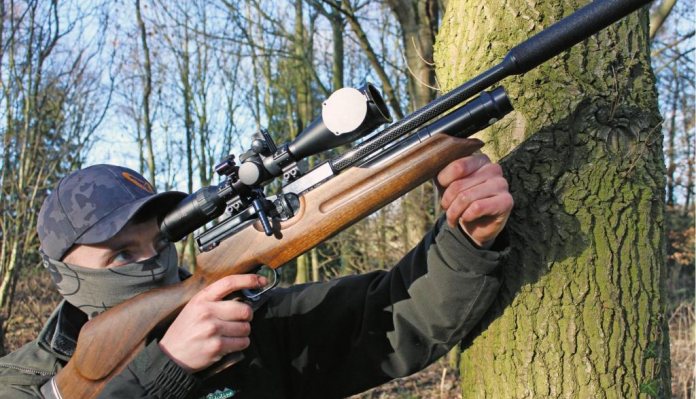 For some, the end of the pheasant season is sad; a bit like the period after New Year, you’ve opened all your Christmas presents, celebrated and now you feel a bit flat. All that build up and then, just like that, it’s over and we are well into February before we know it. For me, it’s a different story. While I enjoy beating and helping around the shoot, I love air rifle hunting more and February onwards is an exciting time, when I try to get out as often as I can.

When beating, I keep my eyes open for possible days out with the airgun. I am no Sherlock Holmes, but it’s always worth looking for clues. On many-a-drive, I have made a note, having spotted a quantity of pigeon droppings underneath a patch of trees, or a particular bough. Also, areas that have clear, prominent squirrel damage or rat holes underneath feeders. All of these are credible signs that it may be worth returning one day to take advantage of. On the back of this knowledge, today was that day.

I wasted no time. The first opportunity I had, was while sat in the woods waiting for pigeons. In this wood, there were droppings everywhere, carpeting the floor. Not pleasant trying to find somewhere to sit, but I had high hopes for a good afternoon/evening’s work ahead. I had sat and watched them fly into this wood a couple of nights ago, so trying to get a feel on where the best sitting place would be.

I decided back then that I would position myself down the bottom end, where the most droppings were and where the birds gathered in the greatest numbers. I parked myself under a tree. My clothing today was my all green Ridgeline Torrent Euro 2 jacket and Pintail trousers. I was interested in seeing if there would be any difference in the lack of camo or whether the natural greens would be enough to conceal me. I have hunted in both camo and just green before and have seen no significant difference in the productivity of the day. Plus, the fact it was a pretty damn cold day and I wanted to stay warm!!

It was a short wait before the first bird of the day dropped in, I was unsurprised by this. My reconnaissance taught me that they started entering the trees at about 15:30pm - right on cue! It was a relatively simple shot, distance wise. It landed in one of the trees I was expecting, so I was well within range, but the twigs surrounding the bird were a different story. I moved ever-so-slightly to get a clear shot through the tangle of branches. There was a wee hole, surely big enough to squeeze a .177 pellet through. I lined the pigeon’s head in the Hawke AMX reticle and released the shot. The faint pop of the HW100 was heard, soon followed by a much harsher ‘crack’. The unmistakable sound of the pellet hitting a branch; damn it!

The pigeon, evidently unaware of my location, but very much spooked, sat bolt upright, its brilliant white neck bar standing out amongst the clear blue sky behind. I re-cocked the 100, as stealthily as I could. I slightly re-adjusted my position and was back on aim. This time, there were no mistakes and the pellet struck home. It violently flapped its way to the ground, indicating a clear signal of a well-placed headshot.

I left the bird where it lay, not wanting to cause any more disruption to the wood. I knew that it probably wouldn’t make all that much difference whether I retrieved it or not. Roosting pigeons will fly into the coppice no matter what, proved, when using a 12 bore!

Even with that massive boom of the shot, the birds continue to fly in, sometimes just seconds after the disturbance. Either way, I was comfy where I was and decided to let the bird sit.

Five minutes or so had passed, when I heard a rush of wind overhead. A large flock of pigeons were descending, almost on top of me. Brilliant! I prepared for the possibility of a shot and tried to read where each of them might land. The sooner I picked my target, the more chance I had of pulling off a shot. While a pigeon is landing, it’s not thinking about the dangers that may be in the woods below. The bird’s attention is mainly on the landing branch. I have rarely seen one call-off a landing either

It’s at the moment that they pull both wings back for the final wing beat before touching down that I like to adjust position for a shot. Any time after this risks the pigeon becoming alert and scanning for danger, as all it now has to do is sit and observe. Just as I described, I upped the rifle and rested it on the tree, ready for a shot in these few precious moments. Around 50 pigeons landed, which was a great rush for me. However, it meant a lot more sets of eyes to spot me. Usually if one goes, they all go.

Due to my bird of choice being directly above me, I decided to go for (as my good friend, Rob Collins taught me) a “Texas heart shot”. This placement sends the pellet up the behind of the pigeon and straight into the heart and lungs, resulting in an instant kill. The pellet struck with a thud, the bird didn’t move a muscle. It dropped forward and impacted the ground at my feet. The rest of them scattered, flying whichever way they thought quickest to get to safety (at least that’s what I thought).

Out of the corner of my eye, a lone bird remained, apparently not fazed by the commotion of a comrade being shot a few yards away. This one was a little further than the rest, still not much of a worry though. The only issue with long range shots in a wood (as with the first shot) is the increased chance of a pellet clipping a branch on the length of its trajectory. If a pigeon is at 45 yards and I hold over 1.5 Mil-Dots, so that pellet is making a bigger loop than a 25 yarder, making it harder for me to pick a clear path through the foliage. It may look like that path is clear on the aim point, but a branch may be blurred or even invisible, closer than the focal point. So, a lot more thought has to go into these shots, allowing them to be successful.

This shot was reasonably clear, but I was still cautious. It was side-on, with the head tucked down in its body. I figured a heart and lung shot would be the best shout for this one. These only seem to work for me when the pigeon is side-on. When the bird is facing forward, there is a lot of meat for the pellet to penetrate and with a sub 12 ft/lbs gun, it’s too much of a risk. I have also found that side-on shots also seem to be more effective with a .177. This is just in my experience.

Others have said otherwise and that’s fine; my dad says that if you have two beekeepers, you get three different opinions, air gunners are probably similar. Regardless, I was confident in making the shot with the tools I had. With the hold-over calculated and very little wind to consider, I fired. The pellet entered just underneath the wing bone and with the same lifeless action as the previous bird, it dropped to the ground like a pound of sausages.

The time was flying by, with pigeons dropping into the trees and I was having a great time. I had never seen so many flying overhead in such a short period either. It’s a good job I had the airgun, as the shotgun could have been an expensive night out! I shot a couple more and missed a few too, before getting the call that tea would be ready in 10. Surely enough time for just one more? Pleasingly, a final pigeon flew in within range. It landed in a bare silver birch tree, its hanging branches looking like wispy hair in the fading light. Another close-range headshot wrapped up the evening nicely, providing me with enough birds for a pigeon Korma. The Ole Hedge Creeper would be proud (Rob Collins for the few that don’t know).

The evening was a great success and I was disappointed to leave. What a start to another year of airgunning! My conclusion on the camo question, was that it made no difference on this shoot, using my personal techniques. Maybe if I were walking and stalking it would have been a different story. My research continues.