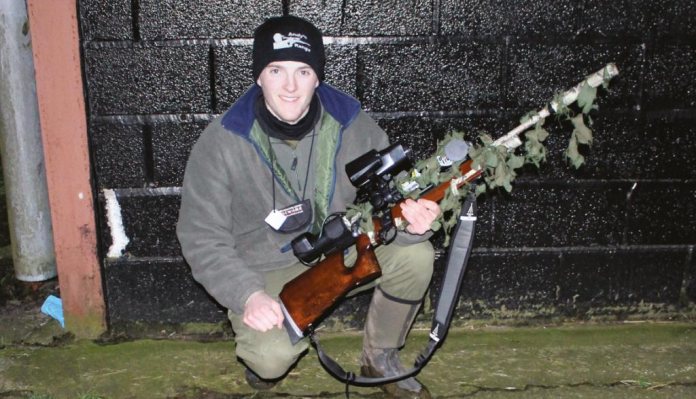 Hunting with an air rifle is often a solo pursuit and I enjoy the quiet solitude. But as the light slipped away on another Saturday, it was an opportunity to buddy-up with Tom and head out and shoot some rats together. The farmer was having trouble with them getting into the cattle feed causing risk of disease to the livestock. When thinking of cleanliness and hygiene, they don’t figure high on the ratings and can cause illness through their faeces or by scratching or biting.

A new chicken shed was planned just down from the cattle sheds, but before anything could go ahead, the high numbers of rats had to be dealt with. There was no way we could possibly resolve the problem with air rifles alone, so we formulated a doublebarrelled approach, but not with shotguns!

Firstly, Tom and I would be making regular visits with the air rifles, driving around various sites, in my Fiat Panda, shooting as many as possible. The second would need to be a course of poisoning and Tom’s dad would be the man for that. The rifle of choice for the night was the Air Arms S200 with the Hawk 4-12x40 on top, held on with medium Sportsmatch mounts. On top of that was a Nite Site Wolf R-Tek with rangefinder and perfect for the airguns!

We kicked-off the night by setting up the night vision and getting the car ready. This entailed winding down the windows and dropping back the seat to give us as much room as possible. The NV was easy; we’d done it 100 times before and it only took a couple of minutes before we were ready to rock and roll. Having Tom along is cracking. We have some great camaraderie and, if one of us makes a good shot, it’s nice to have someone else along to see it and, if a poor shot is made, it’s good to have someone behind letting you know about it!

Tom was on the gun first, as it was his permission and was only fair that he should have the most shooting. Having shot with him often, I knew he was more than capable of putting in a big bag. I wasn’t just sat there, however; my job would be to scan the sheds and cattle troughs with the Night Fox 120R infrared spotter. A cost-effective NV device that does a fantastic job spotting in high definition with an excellent field of view.

Alongside this, I was also the driver, so I had to manoeuvre Tom into good positions where he could get the steadiest shot possible; so, when you think about it, I was doing all the work!

It wasn’t long before Tom had his sights on his first rodent of the evening. At 48 yards, it was a fairly long range shot. Without the laser rangefinder, we would have had no idea of the distance and this would literally have been unacceptable in the dark. The LCD screen on the Wolf, allowed me to have a full view of what Tom was seeing. As I watched him from the driver’s seat, he was rock-solid on the window and ready. I advised him on the aim point, as this was my rifle and he was less familiar with it than his own. He glued the one and three quarter mill dot aim point to the rat’s head and began easing the trigger gently; soon enough, there was the dull pop of the HW silencer, which was followed by a louder ‘smack’ from the pellet impacting, sending it into a wild frantic bounce across the farmyard.

This is typical for a headshot, as the nervous system is completely scrambled and destroyed, causing the muscles to fire without any coordination; however, and although looking painful, it was already dead. We left it where it was and continued driving around the farmyard. We were not short of targets; there were rats coming and going and so it was just about picking the right option.

Pulling up alongside a line of cattle troughs, rats were popping in and out constantly, so we thought this would be a good place to park up and wait. In order to get the best manoeuvrability, we decided to get out of the car and use the bonnet as a rest. This enabled us to both see more and gain a wider ark of fire. The freedom also meant I could spot behind; so, if a rat popped out anywhere we had a good chance of shooting it.

Something we also managed to do was take quick range points on different feeding troughs, allowing us to shoot the rats quicker, saving time turning on the rangefinder for a distance. The furthest marker away was 50 yards and the closest was 10. The first opportunity from this location popped out mid-range about 30 yards, Tom could only see the heart so that was the shot he went for and placed the pellet perfectly in the engine room. This is so much more satisfying than a headshot, they just roll over without any fuss whatsoever. This is also preferred when picking up, because they will generally be exactly where they were hit and will not have jumped around and moved. I hate searching for dead rats.

As the rats started popping out, Tom was reloading and shooting faster than I could count, ‘thwack’, ‘thwack’, ‘thwack’, they just kept dropping. He was on fire, even the long-range ones out at 50 yards he was shooting with ease; this was a completely windless day; so quite acceptable, especially with his experience.

A rat came out past the last 50 yard marker, a very long range of 63 yards, this is pushing the capabilities in daylight never mind in the pitch black. Tom confirmed the aim point with me of 4 mill dots and said he was confident in making a clean kill. Having grown up on a farm he has been around rifles and shotguns all is life, so is no stranger to a long range opportunity. He pinned the aim point on the right head and once again squeezed the trigger and sent the pellet. It hit and I was very impressed. We broke cover to have a look and it was a perfect headshot. All I could do was nod my head in recognition of some great shooting. We headed back to the car and refilled the gun. I was pretty sure it was my turn to get behind the rifle but with Tom doing such a good job though, there hardly seemed much point. Still, when he offered, I didn’t say ‘No’.

Andy on the gun

My first rat was a 10 yarder, almost too close for comfort, because even these shots are very hard to gauge distance, so having that Nite Site rangefinder again was very useful. I held two mil dots over and went for the headshot. The muzzle crack and the sound of the pellet hitting was almost instantaneous at this close distance. It rolled over and crunched itself into a tight ball indicating a chest shot, as it was facing me which was ideal. This shows that being precise at close range is just as important as long-range, I was going for the headshot and missed, it was just luck that the pellet hit just an important spot.

I carried on shooting but couldn’t rack up anywhere near as many as Tom. I did try walking and stalking, which was not particularly successful, maybe the noise of the car was starting to put them on edge. I crept my way around the sides of one of the buildings, knowing that there may well be a rat or two tucked up in the stacked bales in one of the barns.

Sure, enough there was, and I knew the rough range because of previous experience here in the day light. I pinned the crosshairs on the head. I had to take the shot standing due to a lack of ideal rests (maybe some shooting sticks would have helped?) It wasn’t to be though, I pulled the shot sending lead into the shoulder of the rat, very poor shooting and not a mistake I often make. It didn’t go far though, I moved to better spot and got down to a kneeling position. It was still the same range, this time there were no mistakes and the job was finished.

We carried on shooting into the night and we were probably driving for four hours, managing to get a fairly respectable bag. Far more ‘scalies’ than I had ever shot before. Rat shooting can be a lot of fun and very sociable with the right shooting partner. Tom and I had a great time whilst doing a good job and both made some impressive shots that wouldn’t have been nearly as memorable if not for the other being there.