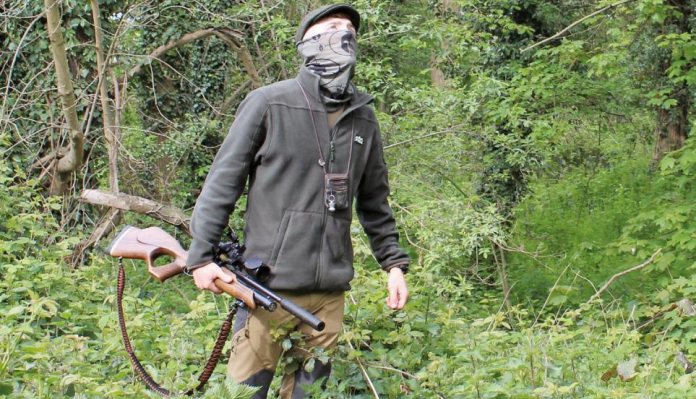 With all the goings on with the general licences, I had thought my plans of shooting the branching rooks (branchers) this year were finished. However, I live very close to the Welsh border and a ferreting friend from my bell target club mentioned the struggle one farmer in Powys was having with rooks attacking his livestock. We talked and he kindly put us in touch. I told him that the first week in May would be the best time to go down with the airgun, because this is when the young birds are sat out on the branches, unaware of the camouflaged threat that lurks in the vegetation below.

I made the journey shortly after our conversation and was shown around the rooks’ nesting area. It wasn’t a particularly big rookery; the wood was probably a little over an acre, but I could see there was defiantly potential for a decent bag. I let him know my plan of attack, which was to put on some minimal camouflage and gently stalk my way up the wood, keeping my eyes peeled and shooting any birds that present an opportunity. With that, he left me to it.

I filled up my Weihrauch HW100, multi-shot PCP, which is becoming my new, go-to rifle, I put on my green Ridgeline fleece (to match the vegetation I’d be walking through) and slipped the magazine in the gun. In a short time, I was ready. There was no great amount of kit needed for this mission. There was a small hole in the hedge that hugged the perimeter of the wood, just big enough to squeeze through without making much noise.

Once in, I looked up to assess the task at hand. Thankfully, the trees had not come into full leaf yet; so, unlike most of my other permissions back in Shropshire, where the trees are covered in a thick green layer, the crows here stood out like flies on a wedding cake. The first bird was far lower than the height I was looking, it took off from a branch at a little over six feet. Maybe it had fallen from the nest and was just sitting there regaining energy. Somehow, it managed to find some wind and take off to the other side of the wood; maybe I’d catch up with it later in the day. I crunched my way through the dry twigs that lay underneath the bramble, nettles and sticky weed. There was a tree a few yards away that I decided to stop at and have a good look at what was above me. It would also provide a good rest, should a shot present itself.

I looked up and spotted a few potential shots right off the bat. The first was almost directly above me at an angle where I could just see the head. I extended my reach to the end of the forend in an effort to make the shot as steady as I could, using the tree as a brace to support me. I find this is always a tricky angle to shoot from; the pellet’s trajectory is entirely different to that of a shot parallel to the ground.

If my thinking was correct, I would need to hold just underneath the rook’s head, due to gravity having less of an effect on the arc of the pellet. I loosed the shot and the pellet struck the equivalent of the rook’s chin, before continuing out of the top of its head. It fell almost to my feet. I had forgotten how little noise these young ones make when they fall, I have been used to shooting fully grown adult birds with the shotgun that come down with quite a crash in comparison to these lightweights.

I soon moved on to target number two, this one was flatter but still high. I would need a tad of holdover for this with the range being a little over 35 yards. A couple of sticks obstructed my shot, but I was confident that the pellet would loop over the top and connect with the quarry. I used the same tree to rest and, once again, let off a clinical shot. That was number two on the floor.

The aim here was not to wipe out the species from the wood, but just to thin down the numbers and keep the damaging corvids a little more in check, to give the woodland more balance and the lambs a better chance in the following spring. With the rook, not being an invasive species, it’s important that I think not to destroy the whole rookery, but just to give it a yearly prune.

Bird number three was a little more of a challenge. It was stronger on the wing, so could get from branch to branch and even tree to tree. Having seen some of its mates shot already, it may have had a fair idea of what was going on, so was keen to evacuate the area. I followed as it moved, hoping it would get tired and pause for a breather. It opened its wings and glided into the tree next door. I was moving as smoothly as I could, being careful not to make any unnecessary noise that could disturb other birds that I had not yet spotted.

The young rook stopped and I took the opportunity. From my location, there were no rests, but I was confident in an unsupported shot. I lined up but pulled the shot, sending the pellet just right of the bird’s head. I reached for the aftermarket biathlon grip on the HW100 and found my target for a second time. It was unfazed by the last attempt and remained in place, gaining energy for the next escape effort. Not this time. The pellet struck home and there was a short ‘squawk’, before it dropped to the soft woodland floor. I talked to myself, “It would have been better to have done that the first time, but I’ll take it.”

I continued to walk around the woods and managed to bag up a few more before the rest of the branchers wised up and returned to their safe nests. Sitting out would be the best way, ambushing them as they ventured back out into the trees. I pitched up next to an old ash tree that had come down, it served as a good seat while I waited. Before I had much chance to let the wood settle down, some movement to my right caught my attention. A rabbit was in the nettles, no more than 15 yards away. I could just see its ears, not enough of its head for a clear shot though. I patiently waited for the chance of a shot to come. Rabbits here aren’t that much of a pest problem, but rabbit stew is never a bad thing and it’s been ages since I’ve had any.

It made its way across a small brook and sat there in the shade. I went for a standing shot, again there was no rest available, but the angle of the shot was very natural, and the range was under 25 yards, so it wasn’t a problem. I pinned the crosshairs behind the rabbit’s eye, just under the ear and released the trigger. Crack! It jumped into the nettles and kicked for a few seconds before relaxing. I knew that it was dead, so let it be while I waited for the corvids to come back out of the nests. I turned back and scanned the trees. There was another rook, looking down curiously at me. I looked back up through a 10x magnification scope and had my finger poised on the trigger of the rifle it was attached to. He too dropped into the undergrowth. Curiosity killed the rook, I guess? Said I.

I knew that the hardest part about this job would be picking up at the end! I continued to wait and shoot the birds as they left the nests. They just kept coming. The late trees were a great help, if this was just a few weeks later I wouldn’t have been able to see half the amount I had. All the time I was shooting, the adults were sat in nearby trees and hovering overhead making a right racket. I could come here every day for a month and there would still be a healthy number of birds.

I ended up shooting about 20 birds. Unfortunately, I could not retrieve them all due them falling in thick cover or getting stuck in the twigs up in the trees. I managed to pick 16 and my adult rabbit. A really good day’s shooting. Next year, I think it might be worth bringing Tom along to stay on the outskirts of the wood with his air rifle, or even shotgun. With his focus on the adults and mine on the branchers, the final number could easily be improved. I have no idea where the general licences situation is going or what the likely outcome will be. Hopefully, by the time this is published, we will have a better understanding. In the meantime, perhaps it will simply mean more trips to Wales for me.