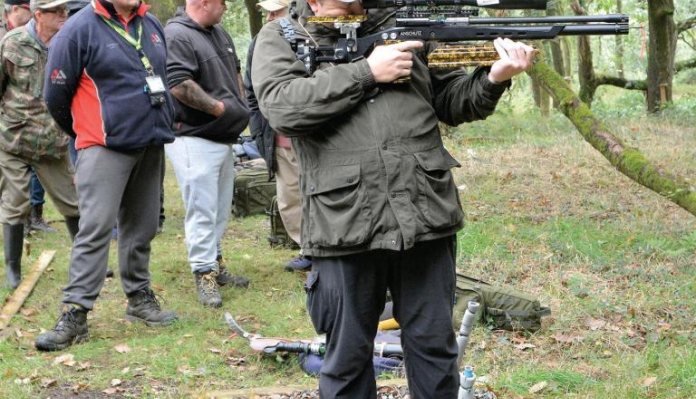 SWEFTA v WAFTA final, sponsored by Air Arms, Neath Gunshop, and Maestro Design. Having been the main instigator in resurrecting the inter-regional challenge between the South West of England (SWEFTA) region and my home Welsh (WAFTA) region, it was essential that I put on a good course and show for the return Welsh leg held at Oaktree FTC on September 9th.

A bit of leg work produced some nice raffle and team prizes, thanks go to our sponsors, especially Claire at Air Arms, Phil at Neath Gun shop and Andras at Maestro design, and one of them even took top individual spot!

The competition sees both regions enter as many shooters as they wish from any grade or class. Open class shooters have a minus 4 adjustment to their score. It is then the best eight scores on the day from each region that count towards the regions total.

The competition this year was over two rounds. Round one was in April, held in SWEFTA. A five-target lead resulted for SWEFTA with the combined eight best region scores at round one; so, I planned the course to be fairly short and edging on the easy side, so as to keep the scores high for both regions and make the outcome as tight as possible. Not a bad scheme, if I say so myself.

The plan went better than expected. My right and left hand men locally, known as the Dr (Simon Poulter) and Dori (James Goouch) along with myself had done a lot of work in clearing sections of our small ground that had not seen FT targets for perhaps 10 years or more? This resulted in seven new lanes that no one had shot prior to the day; plus, the vast majority of targets were moved for the shoot, so no local advantage, which can sometimes be a bone of contention amongst some competitors. The course started fairly easy, with a pair of 40mm kill targets under 40 yards in sheltered areas, and then continued by winding its way from our luxurious log cabin down the not too windy banks and then back up the same bank, but on the windier side! Just one stoppage too, from a string that snapped.

Always the sign of good planning, so few stoppages, in my opinion, and the course shot superbly.

One of the things I usually do with my courses of fire is to record the course details and who hit and missed each target. As expected, the 41 yard stander was the most missed with just 14 hits out of 50 graded and spring gun entries hitting it. Similarly, the full range 45 yard kneeling shot was missed 23 times out of the 50. The joint second most missed target was the off the bag target no. 37, a 53.5 yard Squirrel! Five of the most missed targets were either standing or kneeling, always a sign the wind is not too strong. The target most hit unsurprisingly was the 22yd full size kill (40mm), and everyone hit it! With little wind (for Oaktree), it was a bit of luck, I think, if a shooter sat on one of the longer targets during the occasional gusts, but overall the course produced some good scores and a lot of happy shooters- job done!

Top individual score on the day went to SWEFTA shooter James Head, and his trusty Air Arms EV2 missed just two targets out of the 40. The full range kneeling target that James takes standing due to medical reasons (madness), and the long 52.5 yard duck. Great shooting. Meanwhile, fellow SWEFTA shooter and sponsor Andras Fekete-Moro was in joint 2nd spot on the day with 37, a score that helped him take the combined top individual title over the two rounds. Mark Basset was WAFTA’s top score on 37. Totalling up the two side’s scores produced a winning score on the day of five targets for WAFTA, so the event was tied after the two rounds! Told you I planned the course well.

A shoot off between SWEFTA top shot and current regional champion James Head and for WAFTA Mark Basset was set up, with both shooters taking two shots each at 41 and 49 yard targets, all standing! Mark went first and hit two of the four and I have to tell you the cheer when James hit his third target to take the victory was obviously heart felt from the SWEFTA shooters, well done.

Hopefully, this inter regional challenge will continue in 2019 and beyond with perhaps another region joining in? Who knows, but I am sure next year the Welsh will be looking for the win!