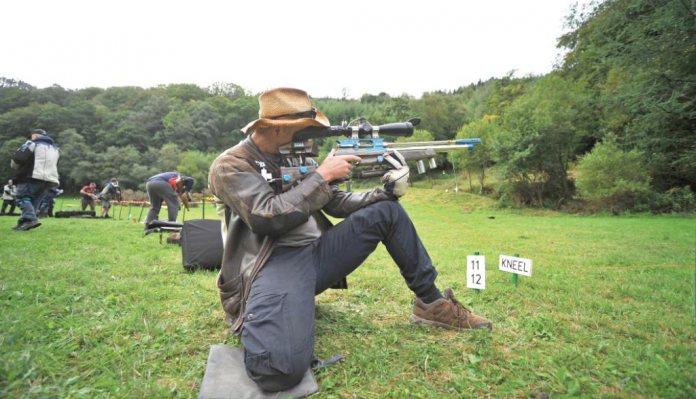 So, having returned from a bemusing top 10 place in the World Championship held in Poland, there was little time before the B.F.T.A. season came to an end for me with the Masters and Showdown championships, kindly sponsored by B.A.S.C. This year, it was once again the job of Blaina Gwent FTC to host, as they did a few years ago. I actually think this is probably the best location to hold this event in the UK and a superb job over the weekend.

Saturday saw two varied 30-shot courses, lots of extreme inclined shots with enough lower angle stuff that even I could catch my breath on. After throwing in the towel at the worlds, Jack Harris used it to wipe clean his EV2 and then wiped the floor with us, missing just two targets out of 60! Mark ‘Betty’ Basset continued his good season’s form, finishing runner-up, four targets down and tied with Red Gallagher.

So, what did I fix, or more to the point, break? Having used a borrowed EV2 Ostler action for the Worlds, with thanks to my good Spanish friend Juan V.L. Sanchez, I decided to match it up with the owner’s silver x45 Leupold Competition scope for the weekend. Said scope needs re-parrallaxing to make it snappy for my use, but for some reason I decided to ignore this known fact and fix what wasn’t broken!

Shooting the Masters with another good friend, Justin Wood, it soon became apparent that things were not right. Despite me setting the scope up, perhaps a bit hurriedly mid-week, my first miss came on just my second target, a 50 yarder, with the pellet going left into the wind, striking the plate. Somewhat bemused, I put this down to a bad shot that I must have pulled. By about lane 3 or 4, I think it was something like 12 clicks of windage adjustment I had dialled into the scope, as more misses were quickly racked up. My range-finding resulted in nowhere near the same target distances that Woody’s March scope was showing; so, it was no surprise to see shots also going very high or low! In other words, I was using broken equipment with no one but myself to blame!

Now, common sense should have seen me drive the fairly local distance home Saturday evening, and replace the wishywashy silver Leupold with my own spot-on x45 Leupold….but that didn’t happen. So, drawn against Scotland’s Dave Penman, a fellow top AA grade shooter for the opening round of Sunday’s Showdown, anything could happen and did!

The Showdown differs from most FT comps, in that it’s just 20-targets; you against one other randomly drawn shooter in each round, and the highest score goes through to the next. With just one minute for two shots in each lane, it’s quick fire too! Lots love the format, including myself, and it’s a once a year competition. Given I had man flu at last year’s event, I perhaps should have put more effort into this 2018 event, but hey that Silver Leupold looked good, even if it could not range-find or shoot straight!

The course was short range and in truth easy. Not a bad thing in such a competition, as it evens out the chances for all grades, it’s possible a lower C or B grade could be drawn against a top AA, so let’s give the little chap some chance! Dave missed a couple of easy shots and I had him in my sights for the win after about 14 shots. Then the range-finding went haywire and by the time I got to the Standing lanes, I knew I was wasting my time, knocked out 18 v16. There was no point in wasting more good 10.3-grain JSB pellets, so I picked up the camera for Round 2 instead of entering the Plate (loser’s competition). Congratulations to Air Arms Team Captain James Osbourne on taking the win and that Jack won best Loser, for a change!

Needless to say, on the next visit to my home club, my Leupold was back on the rails. Oh, the joy of accurate range finding! So, now having fixed the thing I broke, I decided it was time to take some expert advice and go fix some more things. My gun tuner, John Ostler has ‘mythered’ me, as they say up North, to get rid of my EV2 barrel. Having used his endoscope style camera to peer down the inside of said tube, his expert opinion was that it had (before I got it) been cleaned with a brass rod. This had scored the bore and although that did not overly effect accuracy, it did mean he had to set my regulator pressure at over 110 bar, the highest he has ever set one. So, I gave in, and left my own EV2 with him while in Poland. Having picked it up at the end of September, I have to say it’s been an eye opener, having a better barrel, more of which next month!