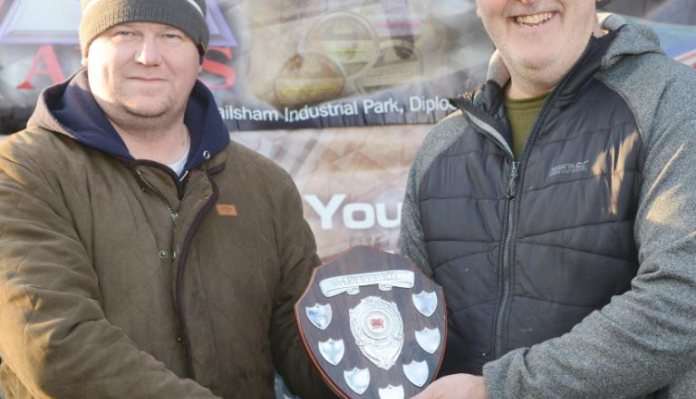 There used to be a good number of ‘open’ shoots held at various FT grounds around the UK; one of which was my favourite, the ‘Sywell 100’. Sywell is a notoriously windy ground, hence why it’s a favourite of mine and yes it was two x50 shot courses in a day. A real test of endurance particularly on a hot summer’s day! Sadly, a lot of the open events have fallen off the calendar, due in most cases to the Summer months being overcrowded with BFTA Series shoots and regional Summer FT shoots.

Conversely it was a lack of shoots over the Christmas period that saw me decide to launch the Oaktree 60 Open in 2016, and it’s now become a ‘must shoot’ competition for a growing band of affecandios. The format are two, 30- shot courses and this year we were very pleased to have sponsorship from Air Arms, Lampeter Shooting Supplies and Knock Back Targets.

The ‘Yellow’ course was first to be shot with a leisurely 9.30 am start time. It was set about six weeks ago by myself with fellow club mates Simon Poulter and James Gooch. We tried to keep the average range down for shots off the bag, with a couple of long kneelers (40 and 45 yards) and a single long stander set at the maximum allowed 45 yards. As it turned out, the wind stayed fairly light, just perfect for our target positioning. My money was on Mark “Betty” Bassett to take the title this year after the phenomenal 2019 season he has had. However, Betty was using his new Walther LG400 and High Master March scope, and perhaps had not had quite enough time to be in tune with it!

One thing I always like to see is shooters visiting us from other regions, so it was great to see a few members from the South West of England and a regular visitor to the Midlands, Shaun Shore who this year brought Simon Francis with him. Indeed, it was Simon who came off the Yellow course with a 1 shot lead, having only missed the long 45 yard stander for an outstanding 29 ex 30.

Just behind him on 28 ex 30, was 2017 winner Richard Beaugie who started the day a little low on confidence having decided to give his Ataman rig a rare outing but must have felt good by the end of play. He is a stalwart of the sport and has clearly still got what it takes when he’s in form.

There was a short break before the white course was opened for shooting, but with a good supply of bacon, sausage, egg and tea to refresh the shooters, no one was complaining. And so, to the ‘White’ course. Just two standing targets here, with the furthest only 35 yards, but this time four kneelers, three of which were testing long shots. While Yellow course had only one target at the maximum permissible 55 yard limit, White had four targets set to the limit or very close to it.

The wind picked up slightly as the day went on, but it was still what I term a ‘no wind day’ at Oaktree, and I’ve shot it many times in much stronger conditions! Anthony Jones got himself back in gear and put in a 28 ex 30 for top score on White, whilst Simon Francis came off with 26 and Richard Beaugie 27. After Mark Bassett had put in a 25 on Yellow, he needed to clear White to be in with a chance, but it was a 27 that saw him in joint 3rd place with Anthony Jones once all the cards were in. And so, it went to a shoot off, with targets at 22 and 35 yards, shot kneeling and then standing. Both Richard and Simon hit the kneelers, so it went as expected to the standing shots. Simon hit the shorter one but left the door open by missing the longer. Richard stepped up and shut the door by missing the shorter one, then locked it by missing the longer one!

And so, we have our first non-Welsh club member winner in Simon, who picked up 10 tins of Air Arms pellets as his prize, and of course his name on the shield. I am very pleased to see the win go outside the region for the first time, and hopefully the competition will grow year on year, and will just maybe inspire a return of ‘Open’ shoots around the country throughout the year!

The shoot ends with the raffle prize draw which this time, saw the Knock Back Targets being very popular again.

And so, it’s time to start planning the 2020 competition, for which the date is already set, Sunday December 27th. Looking at the statistics for the 2019 event, the 45 yard stander was the most missed target on Yellow course, with just six shooters managing a hit! The next ‘least hits were the 19 yard 25mm diameter kill zone Standing shot and the course’s longest target, a 54 yarder off the bag. White course, with its longer ranges off the bag, saw just nine people hit a seemingly sheltered 55 yard target in the woods, making it the least hit on white, with two other 50+ yard bag shots being hit just 10 times and the 35yard stander also proving elusive.

Always interesting to look at the stats, and we now know what we all need to practice on for next year!