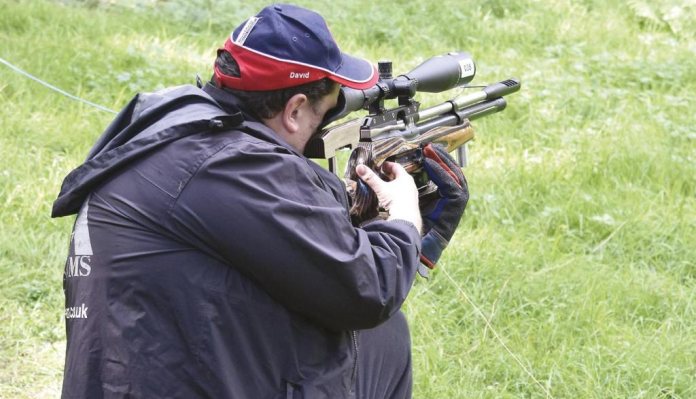 Saturday sees two x 30 shot courses, shot with the highest score being crowned BFTA Masters Champion. Fairly traditional FT, but Sunday sees the Showdown. This is a knockout competition, as it’s you versus your opponent, man to man, or woman to woman, or whatever, over 20 targets, two per lane but instead of 2 mins per lane, its just 1 minute for a double twist!

Emley Moor, or at least a small portion of this huge club’s members, put on a great weekend of shooting with varied courses and conditions. It’s a great location and I reckon they should have held the worlds here, maybe next years, who knows?

To qualify for the showdown, it’s the top six or so shooters from each of the BFTA GP rounds that make it through to the draw, which is eventually made up of 64 of the best British Field target shooters. Sadly, there were a few dropouts or no-shows, which left a few byes in the opening rounds, so the dropouts became lost outs!

There is an idea being floated at the November BFTA AGM, which will drop qualifying places down from 64 to 48 making the event far harder to get into and boosting the prestige of the event, and I am all for that myself. After all, that’s what it’s all about.

I was drawn against Dave ‘Robbo’ Robinson for round one. Now Dave and I are probably two of the larger sized FT shooters, so we crossed the Emley bridge one at a time on our way to our start lane, with the other seven pairs on the yellow course. The wind was tricky and we both double dinked the same lane to tie on 17ex20 each, yes sometimes it happens like that. So, it was straight to the sudden death shoot off on our last lane, taken standing. I went first and hit both, but Dave missed the first shot, the shorter of the standers! Those that go out in round one go into the ‘Plate’ competition, same as the showdown but referred to as the loser’s comp (bit unfair), so the format means at least everyone gets 40-shots on the Sunday!

For the Showdown, I was trying something different. In recent weeks, I had reverted back to my stiff ‘gimp’ coat, the type designed for 10m shooters, but as it had got wet on Saturday’s Masters shoot, it was back in the Air arms ‘soft’ coat for the Showdown. I also decided to try a different batch of 10.4-grain JSB Heavy pellets, I’ve written about my experimentation with these before in an earlier Blog. As the double dink in round one comprised of two good shots that inexplicably both dropped over 20mm low, these were then demoted for the rest of the day for my best batch of Heavies. Yes, I was in serious competition mode!

Midland FT ace Nick Murphy was up in the next round. He should have been a tough opponent, but he had pulled a neck muscle on Saturday night (I decided not to ask just how) and his shooting suffered as a result. Lucky for me, and an 18 v 16 win was achieved with my ‘best’ pellets! Local shooter Keith Gilyard was my opponent in round three. Now Keith is a good shot especially on standers, but I sneaked past him with an 18 v 15 win.

This set up quite a match for round four, with Neil Hague the foe! Using all the skill I could muster and a few tricks, I put in my best round for a 19, while Hague finished on 18 with his lightweight 7.9-grain pellets. That victory was like winning the event for me, as the saying goes, ‘you win some, lose some’; the nature of Field Target or, for that matter, any competitive sport!

The man in form

Dave Ramshead is a top HFT shooter, as well as a fine FT shooter, and he’s in form, and I’d have been happy at that point to go out to him, even if that had meant being beaten by traditional FT kit that has been in the sport as long as me! For that read a long time! To avoid being pumped by an HFT shooter with old kit, I tried, and it turns out tried harder than Dave, another 18 v 15 win somehow saw me in the final against Nathan reeve.

Nathan is one of the nice guys of FT and he won this comp a couple of years ago, so I thought I would push him all the way. We eventually tied 17 each on the tough final course set by Mark Stenton and, after the kneeling and standing Shoot-off procedure, we were left with sudden death on a 45 yard stander! We both hit it first time, but on the second attempt my back gave way and going out in style, I missed the target completely! That’s the way of it, you win some and you lose some.

Still it had been a great day’s shooting with notable highlights, Martin Calpin beating Andy Calpin, Numo Jones putting out fellow Welsh shooter and newly crowned GP Champion Mark Basse. Plus, my own results seeing me £50 better off and another nice BFTA trophy for the (small) cabinet! The Showdown really is a great change in format from the normal FT comps and an exciting challenge for all lucky enough to get there. I know I will be doing my best to qualify for 2020!