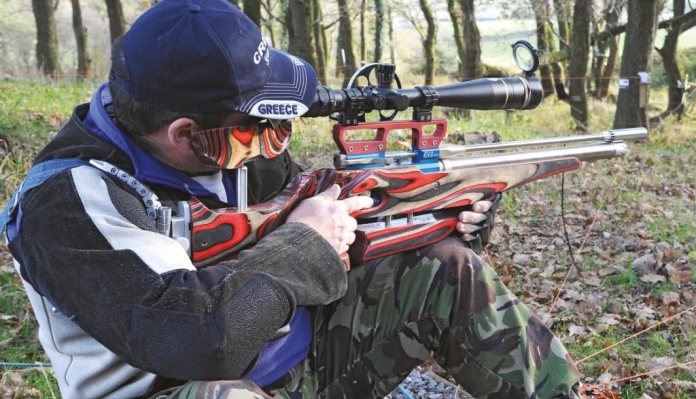 What seems like many years ago, probably around 2007, I first picked up a club mate’s Air Arms EV2 to try. At the time, I was using an old NJR100, a former Air Arms range topper from around 1989! I was amazed at how this MK2 EV2 was not only so accurate, but so easy to shoot well, and it coined the phrase- “How do you miss with an EV2?”

As it happens, it’s fairly easy to miss with an EV2 and some have got very good at it.

Initially, I bought a MK1 version, but that was not really that good, so it was sold on, and I bought another NJR 100; that made four of them at the time! The NJR (named after the legendary three times World Champion Nick Jenkinson) was harder to shoot well, but enjoyable when I managed to do so. Somewhat like a cop-out gun, but PCP instead of spring! However, as my talent, or maybe luck grew, I decided it was time for a newer EV2.

A Mk3 came up for sale in my club. This turned out to be one of the worst EV2s I could have bought! The regulator had a defective valve, something that took my gunsmith, John Ostler, a couple of goes to find, as it was such a microscopic fault. However, once he sorted it, the reg behaved. The barrel on the other hand, was never that great, being very pellet-fussy. It can’t have been that bad I suppose, as it’s the one that took me to my highest FT result so far, with a 3rd in the World championship in Norway 2012. But I knew a better barrel would have got me those few extra targets that Andrew Gillott had found with his Ostler-tuned EV2!

I probably had a better EV2 by then, as I also owned a MK4 version. Given the difference is mainly down to supplied Air Arms stocks between MK’s 2- 4, it made no real difference, as I was at that time using Gary Cane stocks. If only I had discovered Warren Edwards off-set furniture sooner!

The trouble with owning two guns, be it the same or perhaps not, for me was every time I used what I thought was my best, and then took the other one out for some air, I convinced myself that the one currently in my hands was better and that I should swap them over. As such, I tended to use each gun for about six months and then swap. When an offer too good to turn down came in to buy one of my guns a couple of years ago, I should have kept the initial MK3, as by then, I had changed the barrel to a decent one. But that made too much sense, so I kept the MK4, as it was flavour of the month at the time! Turns out the barrel on this, as I mentioned last month, had been cleaned with a brass rod prior to my owning it. Ostler had sent his endoscope camera down it, and said it was nicked and marked badly. OK; that did not make it inaccurate, just a bit pellet-fussy and awkward to set up on the reg.

So, after years of Ostler pestering me, when he said he actually had a spare EV2 barrel, I took the plunge in 2018 and changed it, just before the Worlds! When I picked it up in September, John provided his normal 25 yard test cards. Now I normally don’t take too much notice of these, as I, like many, think this distance is too short to test, even if it is done properly (as is everything by John) in a machine rest! However, John was raving that with my now preferred 10.4-grain JSB Heavies, the barrel was doing one-hole groups. Something not many achieve he told me, as well as saying this was a good bore and if he had known he would not have sold it to me so cheap!

It didn’t take long on my home range, (in fact it was obvious after the first test session) that Ostler was once again, right. This is a very accurate barrel. It does not seem pellet-fussy, it is shooting 8.4-grain Exacts well, but they are taking more wind, so I have stuck with the 10.3-grainers. But the increase in accuracy at 25 yards has transferred down range and resulted in far tighter groups at all distances than I used to achieve. So much so, it gets boring firing pellet after pellet through the same hole at 50m!