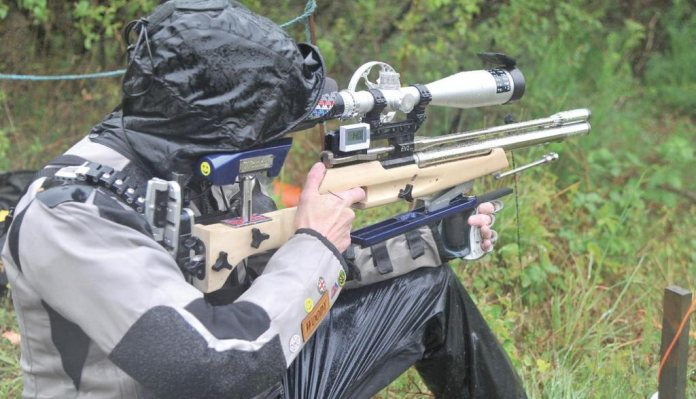 After round 1 at Millride in the Midlands, and Tawd Vale for round 2, it was down to Wales for number 3 on Sunday 26th May with 4 on the Bank holiday Monday. The Format of double headers has worked well in HFT for some time, but it’s been a real struggle getting the FT world to catch up. The idea is to pack more shooting into one weekend, and thus, in future, leaving more free dates through the Summer. At least that was plan A. This year, it’s now best six from nine rounds to count in the GP Series; so, they have missed the target on cutting down on the number of rounds, but it’s a start!

Tondu, my former club, was the venue for round 3. A tough course, most of which I set back in 2016 for the BFTA Champs weekend and sadly unchanged, was made even harder by the heavy rain and wind that welcomed the AM session shooters. Its luck of the draw sometimes, when AM and PM sessions differ with regards to weather and this event was a good example of that. By the afternoon, the rain had stopped, and the wind died; but at least the mud stayed for both sessions!

The opening two rounds had seen four, AA grade shooters share top spot, so it was fairly tight going into round 3. Andy Calpin had driven down for the PM session and just held on to take the top score and win, despite losing targets in his last couple of lanes along the windy top banks. Reg Gallagher, Ian Taylor and Dan Eley were just a shot off Andy.

Luck of the draw

Monday saw shooters move about a mile across the valley to Oaktree FTC, my current club! With the fi rst fully booked session of the year, the AM shooters started in a slight breeze that built up to windy around the halfway stage. By the PM session it was very windy, luck of the draw! The course had a bit of everything with short range gimmie targets, angles between targets, nice clean shooting positions and even eight plates in a fi eld; just how the sport was when I started in the 1980’s! This time, it was Taylor and Reg that put in a joint top score of 45 ex 50. Jack Harris was in 3rd place with Eley just behind, a result that after four rounds puts him out in the lead from Taylor and Nathan Reeve. However, with up to three rounds being dropped this year, a lot can change.

Dave Croucher, travelling partner for Eley put in good scores in the fi rst three rounds, but got blown away up in the Welsh hills at Oaktree number four. Still, he has a slight lead over Andy Finnigan. Andy is one of the nicest shooters you could meet in FT and it would be great to see him take the series. Midlands-based shooters Ian Phillis, Dean Burfoot and Bob Evans are chasing, and it looks like every round will be needed to be shot to keep pace and take the Grade win come August.

Natalie Shead was in superb form at round four, fi nishing just three targets off top spot overall for the grade win, and could be a contender for the series title with enough rounds under her belt.

The B grade class is one of the most intriguing, since many of the contender’s results seem to greatly differ shoot-to-shoot and that’s what seems to be happening so far. Topping the list is Andy Barnes who has three good scores from the fi rst four rounds and leads Martin Calpin, who it must be said shot superbly at round 4 to take the class win. Once we get to round 7 and dropped scores start taking effect, I suspect there could be a lot of standings changing in the class?

Some people are reading too much into the low entry of C Grade shooters at the opening rounds I think. There are just as many in the grade this year as last, so if C graders are not entering events in big numbers that’s probably due to factors like courses being timed, or shoots being too far away. What is for sure, is that those entering seem to be enjoying themselves and none more so than James Meekin, who is travelling with his Dad to each round - great to see. Meekin has a good lead over Joanne Phipps after four rounds, so again it could come down to being consistent over the nine rounds?

The mad hatter’s class, (better known as springer class) has seen some great scores come in. Steve Privett stands in a class of his own however, with his three scores recorded so far, looking more like AA grade PCP results! On current form, it’s hard to see any other winner in the GP series and its looking good for the Worlds in August!

Open class is getting a few more entries each year, a sign of our growing older times! Tony Fouracres has taken top spot in the three rounds he has entered but with four results, its Ian Challis that leads the series from Steve Grimshaw. Time will tell but again attendance could be a big factor in deciding the outcome.