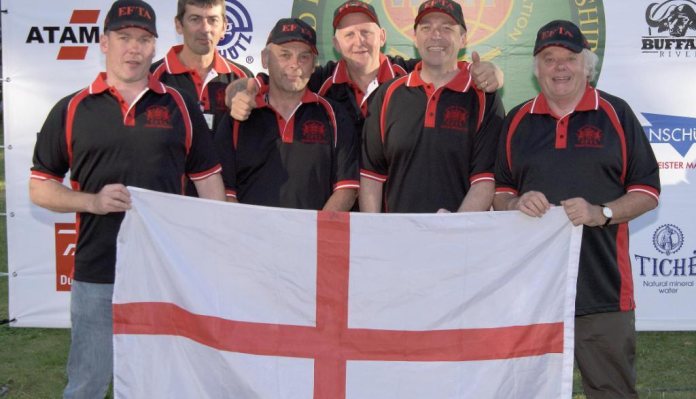 And despite the fact I didn’t go, I really enjoyed the event, which surprised me. I kept up to date with proceedings in Lithuania via Twitter and the Internet shooting forum Shooting-the-Breeze, where twitter updates were relayed with great efficiency and posts came directly from participants.

I was surprised by my own enjoyment because I don’t really follow any sports, be they on the TV, radio or internet. Occasionally I do get caught up in some of the big televised events such as golf’s Open but I don’t go out of my way to watch. Participation is more my thing, it is nice to marvel at the expertise of top sportsmen (and women of course) but particularly from the stand point of having tried (and usually failed) in any given field of competition.

So maybe it is because I do compete in FT and appreciate what it takes to win any competition, that I found myself glued to my phone for a whole weekend during August, constantly checking for updates. Luckily for me, my wife didn’t mind this, she is always gawping at the screen of her own phone, so barely noticed my sudden interest in these most useful yet frustrating of gadgets.

I’ve competed in several FT World Championships over the years and as with most other shooting events, it isn’t really about the shooting. It’s about the whole experience; visiting a new country, experiencing a little of the James Osborne says: “just because I didn’t go doesn’t mean I’m not going to report back to you all on it” culture, shooting with new people, overcoming language barriers and being able to say in the future that you were there. Obviously the competitive side is very important too and not quite knowing how good the competition is from around the world certainly adds an element of excitement. The atmosphere is like no other shoot and it is simply because the world title is at stake and it might just be your name going on that trophy.

So through the medium of the internet this is how I saw the World Field Target Federation 2015 World Championships unfold.

Firstly I didn’t even know who was competing from the UK, I wasn’t going so I didn’t really care - I’m quite self centred. I hadn’t even looked at the websites relating to the shoot. It was only after I had shot with one of my Air Arms team mates during the final round of the BFTA GP series and I discovered he was going to be shooting in Lithuania, that I thought perhaps I should at least find out a little more about the event for future conversational use. So when I had the opportunity (probably while at work) I discovered the dedicated World Championship website.

My first surprise; a decent website, professional looking and not at all like I was expecting, with a lot of well presented information. My second surprise, the photographs of the venue made it look stunning, lakes and woodland in fine weather. This was good promotional material and it put two thoughts in my head. Firstly that this year’s World Champs would be well organised and run, and secondly I suddenly wished I had taken the chance to go.

The first reports back included a few hastily taken photographs and confirmation of everyone’s safe arrival, even if that didn’t necessarily include their luggage. Luckily for Dave Penman his rifle had made it and his fellow UK competitors found enough gear between them to clothe him until his suitcase did turn up. Those initial reports also backed up the promise of the website with regard to the organisation.

As shooting commenced on the first day of three, posts began to appear and it seemed there were a few nervous starts. It also became clear very quickly that the marshals weren’t shy about docking targets from shooters for infringement of the rules. Fair enough you may say, but it is more complicated than that, and a debate for another time, as a whole article would be pushed for space.

Unofficial results from day one for the UK shooters soon came through along with others of interest. Official results were posted on the website promptly for those of us left at home to study and a gallery of photographs uploaded too for a little visual stimulation. Jack Harris from Wales was in the lead with an excellent 49 ex 50 and he was closely followed by many of his Welsh team mates as they took a commanding lead in the team event.

Day two followed with the same routine of updates throughout the shooting, followed up with the official results and some more photos. The conditions were fairly benign and scores were once again high. Jack now shared the lead with Russian Sergey Zubenko; each only having missed four targets from 100 with the title still within the grasp of many shooters. It was all getting a bit too much for me and I was glad I wasn’t there after all.

I still had my phone glued to me, as the final day got under way but I’m afraid the mobile technology let me down. I kept on checking but the lack of a data signal meant only frustration as the hours of the competition rolled by. By the time I rejoined the 21st Century it was over, the unofficial results were in and it appeared that Sergey had beaten Jack by a single target, with his third 48 ex 50 of the weekend, some impressive shooting and certainly worthy of a new World Champion. I was enormously disappointed for Jack but I suspect it is only a matter of time before he too gets his name on the trophy. There was British success in the Springer Class, as Steve Privett scored an amazing 45 on his final day to overcome an eight target deficit.

WISH I WAS THERE

Clearly following any event in such a remote manner as I did the World Championships is no substitute for actually being there. But it is better than nothing and when I’m chatting to those who did go, I might not feel quite so left out. The hosting of this event appears to be getting better and better and the UK has its chance in a few years time; maybe we’ll have some live video streaming by then. My final word has to be a big thank you to Neil Thorneycroft, for supplying all the photos.