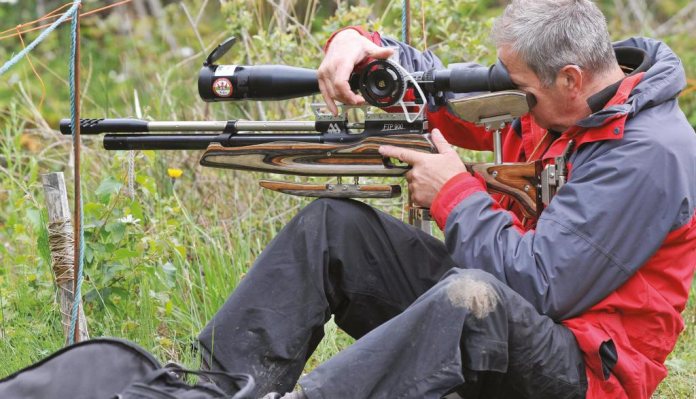 After last year’s successful resurrection of the inter-regional challenge between the South West of England (SWEFTA) region, and Welsh (WAFTA) region, where SWEFTA took a surprise win after a sudden death shoot off, June saw the 2019 Challenge take place at Tondu in South Wales and then at West Devon for round 2.

Tondu is a disused quarry, so the steep banks and wooded sections were a nice contrast to the open traditional ‘field’ layout at West Devon. The competition sees both regions enter as many shooters as they wish from any grade/class. Open class shooters have a minus 4 adjustment to their score; as they take the standing and kneeling shots from the sitting position. It is then the best 8 scores on the day from each region that count towards the regions total.

It was good to see a decent turn out of SWEFTA shooters make the trip to Wales for round1. The weather was dry, and the wind was up. The course was set in two parts, a straight line through some woods and over ponds and then up to the old quarry walls for some tough, steep and windy shots. Rich Beaugie took the top spot on the day, with a 37 ex 40, with a three way tie for runner up on the day between myself, Mark Basset and Steve Franklin. With a home advantage, it was WAFTA that came out on top on the day, the best 8 team scores gave a healthy lead of 31 targets.

So, a few weeks later, the Welsh clubs sent a fair entry of around 16 shooters South and West to Pyworthy. Now, the one thing the Welsh were well and truly beaten on over the two rounds, was the food. A fine display of cakes was on show, with some very reasonable hot food options; top marks to the West Devon members, who fed and watered us and, of course, everyone at the club who put on the event.

The West Devon course is a straight shooting line, with the lanes cut into 2 foot tall grass. With a gusting right to left wind, the tall grass gave a pretty good indication of what was going on. It was then up to the shooter to judge the strength of the wind on each shot. Normally, target strings help with this, but the heavy-duty lines in use hardly moved, even when the grass was bent over! So, using your eyes and watching the grass was the key. Well balanced with ranges, as it turned out, it was the shorter distance targets that proved for many, myself included, the real test for wind allowance.

I had the pleasure of partnering Daz Ford for round 2, a fi ne figure of a man, who has lost a few stone of late, in an attempt to turn his life around with much gym work and exercise. I could learn a thing or two from him, don’t you know! Meanwhile, he could learn to do 10 to 20 yards scope clicks off me! Daz, a ‘B’” grade shooter, shot down some tough targets, but missed 4 or 5 mini kills, 12.5 to 15mm, all under 20 yards. Still, a fine 29 ex 40 gave him top honours in ‘B’ grade on the day.

I, meanwhile, made one bad decision, to ruin the almost perfect day. Still, 39 ex 40 was a decent win over the rest of the fairly significant entry on the day. WAFTA shooters filled the top three places, with an old apprentice, ‘Gadget’ Davies, and current apprentice Simon ‘Dr. X’ Poulter, both pulling fine 36 ex 40s out of the bag. Top 8 scores on the day gave SWEFTA a total of 247 targets, but WAFTA had 268. A healthy lead for sure, so the Trophy heads back to Wales!

Special thanks goes to Rich Beaugie for sponsoring the individual trophies, with the top eight shooters who shot both rounds 1 and 2 getting a commemorative trophy.

So, who won the combined event? As it happens, after a determined effort, it was me! Having been two targets behind Beaugie after round1, he struggled at the last with a 32. Likewise, Top SWEFTA AA shooter Steve Franklin had a bad day on just 27, while Mark Basset forgot to pull his finger out on 34, so I can proudly add the Title of 2019 SWEFTA v WAFTA Champion to my small list of achievements! After a fairly poor year so far, results wise, admittedly with a lot less competition shooting, it felt good to have some desire back and shoot well. Now, what about that World Championship?