FT Blog:You Give, You Take 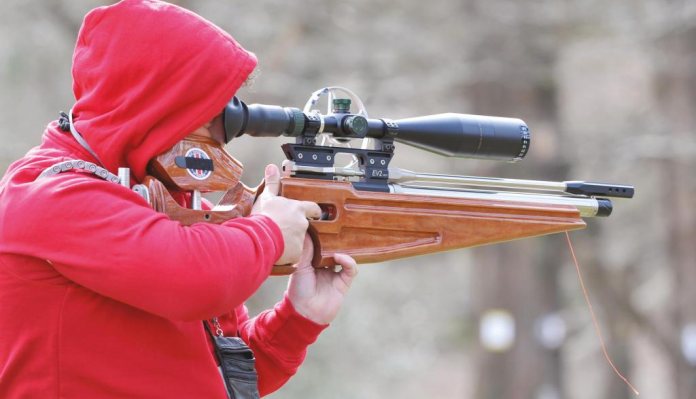 The traditional opening to the summer BFTA season is the ‘Inters’ (Inter- Regionals) weekend. Saturday sees a 40-shot course, where the top score is crowned BFTA champion and then the Sunday is a 15-man team event over a different course, but with the same number of targets and with the best eight scores counting from the eight and a bit regions!

Blackbrook country sports ground, a commercial venture, was the host venue this year. I had mixed feelings for the weekend, following last year’s disaster at Anston and my only other visit to Blackbrook had seen me disqualify the event from grading, as it was not set to the rules! This time, I am pleased to say that the course qualified, but it could have been a little more varied. The 40-shot ‘Champs’ course on the Saturday featured many long shots over 50 yards and most lanes had two long targets straight out in front of the shooter. I’ve described this ground as a flat field with lots of very tall posts and, whilst it was a real challenge, it did seem a wasted opportunity to not mix it up with the use of shorter range targets, given the wind!

The wind was up in the early stages of the day but had relented to a breeze by the time the last group, of which I and indeed Dave Ramshead was called to start shooting. With over 120 shooters having already shot the course, it was very disconcerting to count on some of the kills less than 15 hits, the face plates looked like shotgunners had been practising on them, badly! An indication maybe, that it was probably too long and tough for the conditions. Look at the stats, and only around 15 of the 130+ entries scored more than 30. Still, Dave Ramshead was knocking them over the lane in front of me, with ease, missing just five out of the 40 to make and take a great win.

Sunday’s course was somewhat more interesting, as the firing line snaked its way in an ‘S’ shape; so; at least there was some variety in the wind. It was slightly shorter too, which helped. Personally, I prefer the Inters course to be fairly easy, so that it closes the scores between the regions. Sadly, Scotland could only muster four team shooters, but it’s always great to see our Celtic cousins. However, the event has a different feel to it, being a team affair. Shooters are actively encouraging team members they really want to beat and when a rival team member double dinks (misses both targets) in the first lane, it’s no bad thing if the surrounding opposition bursts out laughing and cheering. However, like any competitive discipline, it’s all part of Field Target and you give and you take the banter equally!

As Blackbrook is a ground used by the MFTA region, there was perhaps some home advantage that took them to runners-up spot. However, I am very proud to say that I was part of the winning Welsh team that took the title, by just one target! It’s also the first time a non-English region has not won the event, in England. Just that little bit sweeter! (OK; that’s enough Simon! - Ed)

By contrast, the following Sunday, the Welsh summer FT season kicked off at Nelson FTC. That meant me and all my fellow team Taffs were out to beat each other, no matter what! With the strong wind forcing shots anything from 10 to 70mm out of the kill zone, it was a tough event once again. However, this was a great course, with short range targets you had to really think about, do you risk staying in the kill at 30 yards, or do you risk coming out and going straight? Add to that just enough targets at angles to the firing line to make you think. This was a great FT course, and as crazy as it sounds, enjoyable to miss on!

There were some great results too and, although I didn’t technically win, I did beat ‘Betty’ Basset in the shoot off; well, I won the coin toss! Newly promoted to AA grade (in the Welsh regions own grading list) Anthony Jones really upset the odds, with a superb out of the bag 34 ex 40, and the golden dragon trophy from this event was a special win. It was also great to see 14 year old Bon Taylor have a go at his first FT competition. A less windy day may have helped, but from what I saw, he was very happy with his 15 ex 40 and I am sure with more practise, more and more targets will fall. So, things are well in the land of the dragon, it seems.