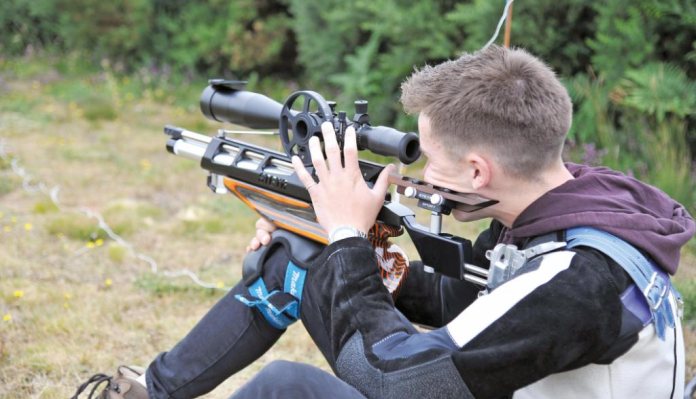 There has always been a tradition that a competition course is not shot until the day of the competition, even if it has been ready for some time. Thus, no ‘home’ advantage is gained, however, and as always, there are exceptions to the rules.

Least that usually happens in most regions of the UK. Some regions have permanent courses that sadly don’t change too much from year to year and it’s well known for example that target 1 is 55 yards same as it was last year and the year before! There are even some events that in the past, have let their members pre-shoot the ‘new’ course, even at National GP level! Depending on your views, it could be at worst construed as a form of cheating, or as a way of getting a leg up before the comp. However, if a club does not bother to change course layouts, then that’s how it is and technically the home ground has the advantage.

But does it matter and does the home shooter have the advantage, and are they more likely to win? There is an old saying, ‘cream rises to the top’ and that is indeed usually the case. The better shooters (AA Grade) are nearly always going to be the top score on the day, home or away. Also, and even with pre-knowledge, there are still a lot of variables, from equipment malfunctions to weather conditions.

When I set a course, I accurately measure the ranges to all targets, so that the stages are balanced for all abilities. However, I don’t always win at my home shoot, despite if my scope tells me a target is 52 yards and I know its 55! In fact, I have won far more ‘away’ shoots than home; but whilst morally, it is not really the thing that should be the norm, it happens. Thus, for my home club’s next regional shoot on August 4th, I have broken with tradition and let our home shooters (all three of them) who after all have worked very hard to build the course, pre-shoot it twice!

I call it testing the course and indeed we have made changes for balance and safety from the results of the tests. However, as none of the ‘home’ shooters are like me AA grade, it will be interesting to see if their results with pre-practise gives them a higher than average score on the day? The course is a shorter one than I usually set, it’s designed to be won on the standing shots, so good practice for the Worlds a few days later!

It’s coming home! We are just a week away from the 2019 World FT Championships being held in England for the first time in many years. I have learnt a lot of my course building from taking notes when shooting the Anston FTC ground. The excellent layouts, with varied shot angles are normally set by Andy Calpin and it is he that is setting the three 50 shot Worlds stages. One thing I’m sure, no competitor will have shot this one prior to the first of the three days of shooting! The ground too is virgin, so no home advantage either.

For me, home advantage does not really exist, as I think how a competitor scores is more to do with the conditions encountered. The 2019 WFTF venue is a dense wood, very English in style and thus I’m 95% sure it won’t be particularly windy. Shooting the 10.3-grain JSB ‘Heavy’ pellets, I’ll be surprised if I’m out of kill more than 10 times over the three days! That won’t give me an advantage, I’m someone that enjoys shooting windy courses with ‘out of kill’ shots the norm and don’t like windless ones. I know over the 150 targets, of which 16 will be standing shots, that to reach my goal of being in the top 10, I’ll need to hit at least 12 of those. Where is my lucky Hat?

So, who will have the advantage, in what should be near windless conditions? The truth is, being the biggest World Championships to date, with 450 entries, it is too hard to call. I have a list of 20 potential ‘on form’ winners, and another 20 that could win it with a bit of luck; it really is that open this year.

My tip is Red Gallagher. The young Englishman has returned to top form over the summer and is an excellent standing shot; usually. So, that’s him cursed! There is a large pool of his fellow countrymen that could also win: Ian Taylor, Dan Eley, James Osbourne, Dave Ramshead, Justin Wood; the list is nearly endless of who has a chance. Likewise, the potential winners from the rest of the world has been getting bigger each year particularly the Europeans. They have even got used to shooting in the rain, which is forecast long range! Defending champion, Sas Feranc, I fully expect to see in the top 10 again this year and the Italian Gianni Fabianelli has proved a lot since 2015. You can never discount the Irish Pump master Conor McFlynn and there are a few Spanish shooters that could make top spot.

A strong contention from Wales is assured, with two time Champion, Jack Harris, hungry to make his 3rd victory on English soil. Equally so, I’m sure, to make it their first win, will be his team mates Mark ‘Betty’ Bassett and Doz Falconer. Plus, me; if I find my lucky hat!