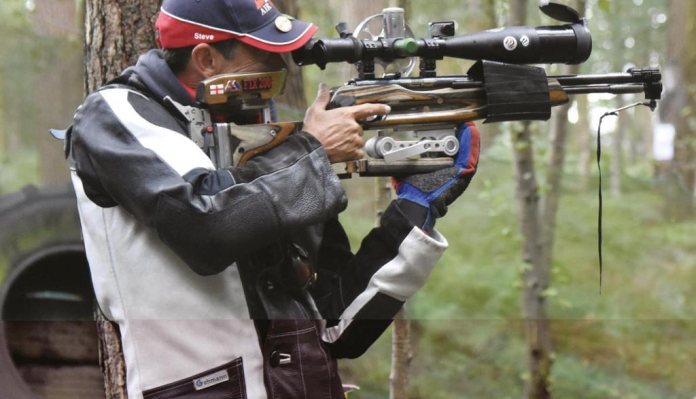 Just over 430 entries made it to the firing line for the 2019 World Field Target Championships held in England at the Heart of England Centre, near Coventry, and as predicted, cream rose to the top. Admittedly, I was surprised in some aspects of who rose and also how high, but then a little secret came to light and it all made sense!

It’s a fast paced event, the Worlds these days, and the English Field Target Federation (EFTF) did a great job in booking in and checking the entire field of shooters on the Wednesday; practise day. Now this for me, is where it went wrong, as I spent about 20 minutes checking my kit on the ample if somewhat windy zero range and then the rest of the day walking and talking about in the hidden sun, while not drinking! Post event, I came to the conclusion that I was de-hydrated most of the week and I’m sticking to that one!

Practise day is a day for meeting old friends from around the world, and 8 hours were easily spent doing such, while helping out Air Arms with the unveiling of the prototype for their new top of the range FT gun. As yet unnamed, but it’s a winner. How do I know that? Well I have the privilege of being part of the test team, and I have put about 2-3000 pellets through it, as well as given feedback on design along with six others. More on that another time!

The Worlds is the Worlds, and there are rules that have to be followed. Most were, but some were not, for me, some of the ones not followed I would have preferred. Like grouping top shooters together by class and I would have preferred to see individual courses, but essentially you got a similar course three times following the same firing line. I had spring gun shooters Brian Samson (England) and Frank Esser (Germany) for the opening two days and then John Eroch (USA) and Jose Abal (Spain) for the final day. In some respects, I’d prefer to shoot with the same folks for three days. It has to be said, some of the boxes were not ticked for me and others. The welcome dinner and the trade village fell short of expectations, but it is what it is!

We started on the black course, which unsurprisingly had black face plate targets. It was a long course, but for an Andy Calpin course, I thought was disappointingly reserved, most shots were just two targets in front of you, with no real thinking needed between, due to the lack of angles; a Calpin trademark and something I have learnt to set my own courses from. With no wind, every shot was inside the kill on day one and there were two clears, 50 ex 50, one from Red Gallagher and one from John ‘Cream’ Costello, on two different colour courses! White was my second run. Now this I enjoyed, as for about 20 of the 50 targets there was a slightly less dense section of woodland where the wind got to the face plate and I was out of kill about 15 times, amazing at a WFTF event!

White seemed to be a bit more of a thinking shooter’s stage, with some nicely placed angled shots and slightly shorter in range than black. Yellow was an odd one, high wind could be seen and heard to move the treetops above us, indeed one large tree had to be secured, as it started to lose its footing next to the shooting line, but sadly little of the wind could find its way to the floor where the targets sheltered. I think I was out of kill about five times on yellow, and two of them I should have stayed inside!

That secret I referred to earlier was that John Costello, who’s work takes him away from FT most of the year, had managed to find one day a week for six weeks prior to the Worlds to practice on and thus got his form back, class of course being permanent! Having cleared day one, he missed just three targets on day two, and two on day three, one stander and four off the bag sitting shots to take the title of World Champion for a second time, following his 2013 win in Germany. Superb shooting from one of the nicest chaps in FT. Double World Champion, Jack Harris, really wanted to take the title back home to Wales but was two targets adrift with former champion Jose ‘Pepe’ Redondo third, again two targets down. Stephen Privett put in scores with his ‘Spring’ gun, that he would have been proud of with his PCP, to smash the class and take the springer title for a second time. And Spain won the PCP team event, which meant a party until 3am!

On the whole, it was better than the Polish Worlds the previous year, and I enjoyed it, despite not feeling 100% and only just making the top 100. Perhaps I should have worn my gimp coat and a different hat, and not drunk so much Tuesday night!