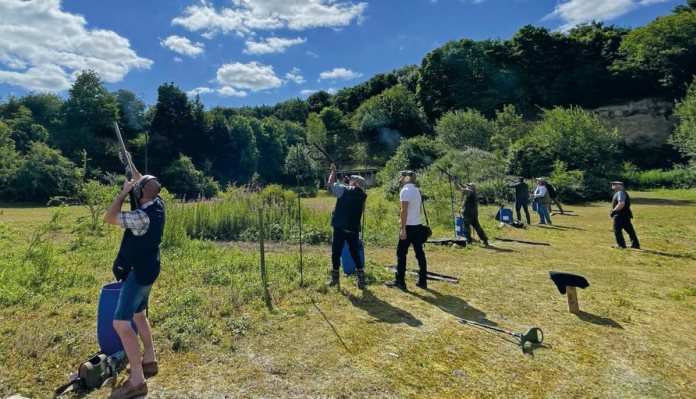 I recently got an invite to attend a simulated game day and seeing that I have wanted to go on one for ages, I jumped at the opportunity! For those that don’t know, and as the name suggests, a sim day runs like a pheasant shoot but the birds are replaced by thousands of clay pigeons, allowing the guns to improve their shooting through sheer volume of shots. Also, in between each drive, the guns will enjoy food, drink and a spot of socialising. Sounds good to me!

The Stowlangtoft Simulated Shoot, based in Suffolk, runs between January and September. It is run by Andrew Johnson, Philip Thorrold, and his daughter, Jessica Thorrold. Philip is renowned as one of the world’s top shooters and is now a professional coach, so you are certainly in good hands!

The day is open to groups of between 12 and 24 shooters, but smaller groups or singles can still get in touch and be added to an existing group.

The format is pretty simple and includes four drives, 5000 clays (yes, you read that right), breakfast elevenses and lunch. Plus, hot and cold drinks are provided throughout the day. All for £220 per gun.

In preparation for the day, I took some time to ensure that I would have everything that I could possibly need. A significant amount of shooting gets done and this can take its toll on you, the gun and your ammo supply!

Ammunition wise, I was planning on using a 12-gauge and it is recommended that you take at least 500 cartridges with you. Depending on whether you are taking an over and under, side by side or semi-auto, it is a good idea to select a lighter, 21 or 24-gram load, to reduce recoil to a minimum. I always buy fibre wad cartridges to avoid getting caught out by restrictions at certain venues, so make sure you consider this.

I decided to take two semi-auto shotguns in the end, along with choke keys etc, just in case the sheer volume of shooting caused one to expire on me! Primarily, I would be using the Mossberg 940 Pro Field that I reviewed in the August issue of GM, as the characteristics of this particular shotgun would no doubt suit the fast-paced nature of the simulated game day.

Safety wise, I took some ISOtunes Sport ear pro so that I could hear commands and the stop whistle, and I wore safety glasses and a cap to protect myself from falling clay fragments. As well as a couple of Jack Pyke cartridge bags, I also took a pair of Macwet gloves, which was a good decision as the Mossberg’s barrel got seriously hot!

Luckily for me, the location was easy to find because I have been to the farm before. There was clear signage outside the meeting point, which was ‘the pit’ and here, there is a 100m range and a smart hut. The latter was being used by the caterer, Samantha, who does the food for all of the shoots that Jessica organises. On arrival, I was handed a cup of coffee while we waited for everyone to arrive.

Once all 14 people had arrived, we had an excellent bacon roll, signed the necessary paperwork and had a safety briefing. The guns would be separated into pairs, with one shooting at a time before swapping around. Each gun would get 5 minutes of non-stop clays, with the end being signalled by a whistle.

The first drive took place in the pit, with the guns facing one of the steep walls. The traps were located out of view, on top of the pit wall and it was clear from the arrangement that the targets would be medium-height incomers. So, a nice way to start the day!

I was paired with Richard, who not only lives a stone’s throw from my parent’s old house but also has plenty of experience when it comes to simulated game days. Whilst he shot first, I took the opportunity to get some photos.\

To be honest, I was surprised at how relentless it all was. Although you know what’s coming because someone has told you, it’s still a shock once you are there trying to do it! As well as actually trying to hit the clays, it was evident that reloading played a big part and helping each other out was the best way forward. It was soon time to put the camera away and get the gun out.

When it came to my go, I began by loading for myself to see if I could keep up. I quickly realised how tiring loading is on a hot day, and that any help with the task is greatly appreciated. It wasn’t long before Richard started assisting me by presenting cartridges with the headstamp facing me so that I could bung them in the Mossberg quickly, and this made a huge difference.

Regarding shooting and hitting the clays, my hit rate started as acceptable and began to improve quickly as the flurry continued. It’s a good idea to bring a shotgun that you know your way around and that fits you well, as I would say that this is very much ‘instinctive’ shotgun shooting. You definitely need to have a reasonable skill set to enjoy it to the maximum, as it is easy to get flustered by all the targets and end up throwing the basics out the window!

Once the drive was over, banter ensued, empties were collected and I downed a few bottles of water. It was hard graft after all!

Soon, we were into the vehicles and off to the next drive. Here, I could see two JCB telehandlers positioned on high ground to our front. Each one supported a custom platform and four Bowman traps, enabling the system to replicate all the various types of game birds that you would see in the field.

I was positioned down the bottom, quite far from the first JCB, but very close to the second one. Richard went first again but this time I had a crack at loading for him, which is something that I have never done before. With his cartridge bag around my neck, positioned to my front, he would simply break the gun and present the empty chambers so that I could load in the next cartridges. We repeated this over and over with great enthusiasm, generating quite a significant rate of fire in the process. Well, until the whole cartridge bag was empty that is!

After working up an appetite, it was back to the range hut for elevenses. There were sausage rolls, chocolate brownies and bruschetta. The latter included a delicious topping of Palma ham, mozzarella balls, tomato and basil.

Next up was a woodland drive, which took place in a clearing, providing some very welcomed shade from the sun! Once out of the vehicles, I headed to the furthest peg to set up, which just so happened to be a very good spot. Everyone was in good spirits, laughing and joking, which is always nice to see and all part of the experience.

Richard went first as usual and we were faced with constant flurries of incoming clays that came in through the gap in the canopy created by the clearing. Yet again, we managed to get all the cartridges in his bag used up before the whistle blasted at the end of the drive!

I was helped with loading again and I really got into my stride on this drive. Stealing other people’s clays is all part of the fun at a simulated shoot and my position on the line allowed me to hammer the targets pretty early, so I was never short of something to shoot at. Plus, the semi-auto allowed me to churn through the cartridges a bit faster than everyone else, especially now that I had got the hang of reloading the 940 very quickly! For me, this was the best drive of the day.

All good things come to an end

The final drive took place in the pit again, but this time the clays were much higher! There seemed to be a huge variety of angles and heights, which represented a decent challenge for the guns. The timing of which made sense, as everyone had their eye in by this point and were smashing clays left right and centre. After all, the whole point of a sim day is to help you become a better shot and this day certainly helped us all do that. Overall, I thoroughly enjoyed myself and I can’t recommend the experience enough. Personally, I think it is the most fun I have had with a shotgun and I will be booking another day!

To top everything off, at the end we enjoyed a great lunch, consisting of pulled pork rolls with a potato salad and some coleslaw, followed by a lemon posset dessert with a biscuit. Perfect!