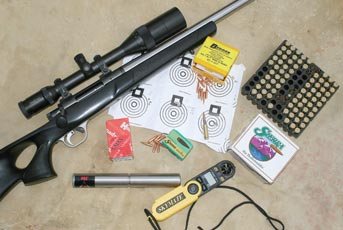 The .20 Satan continues to amaze me with its long range accuracy and lethality on crows despite the inevitable throat erosion due to the high intensity loading. So the next step was to slow things down a little and achieve the same or better down range ballistics but with higher and heavier BC bullets, not sheer speed. This would hopefully mean less barrel wear and so I upgraded .20 Satan route by expanding the case to accept .224 bullets.

Originally I went the fast twist with the heaviest bullets possible such as Sierras and Berger`s 90- grainers but having used the .22 Satan over the years I have also found great results with lighter pills for small deer use.

I originally used the 6x47 Swiss Match (SM) case for the .20 Satan and now for the .22 version.  Lapua later produced their new 6.5x47 case which is not the same dimensionally as the SM, as it shows a shorter neck but longer body. However the Lapua use a small riﬂe (SR) primer as opposed to the large riﬂe (LR) of the SM.

Wishing to utilise both case types for testing I had Steve Bowers make me a forming die that would form either brass type straight down to .22x47 Satan dimensions. This only really involved a neck swage for the SM but a shoulder bump and neck reduction for the Lapua. Having run through the form die I trimmed to 1.8435”, which was 25 thou shorter than the chamber dimensions of 1.8460”; a little short but safe. Water capacity is then 46.52-grains for the SM and 46.12-grains for the Lapua.

The Lapua brass is heavier and has slightly thicker walls. After deburring inside and out with a Wilson deburrer the SM was ready to take bullets, the Lapua still needed a slight neck reduction to provide adequate tension. This was utilised with a custom Wilson die that Steve made with the chamber reamer and utilising differing neck bushes. To resize, the SM cases using a 0.250 neck bush and the Lapua a 0.252 bush to give adequate neck tension and clearance with the neck chamber dimensions of 0.254”. To ﬁre form I used a load of 34-grains RL19 under a 69-grain Hornady Match bullet. All ignited with Federal 210 LR or 205 SR primers dependent on case used.

I wanted a long but practical barrel length so settled on a Pac-Nor, stainless, match grade 28” tube overall with a 5/8” thread cut and an 11° crown. Riﬂing was a little more difﬁcult, to stabilise 75 – 80- grain projectiles a 1 in 8 twist would be ﬁne. But the 90-grain pills are very long bullets and 1 in 7 or 1 in 6.5 are better. I stuck to 1 in 8 inch as I did not want pressure issues and crossed my ﬁngers.

I designed the case/reamer on Quick Load ballistics program and Dave Kiff from Paciﬁc Tool and Gauge made it with a short throat for a 75-grain grain A-MAX bullet. However, when the heavier 90- grain Sierras and Berger`s are loaded they would not encroach too much into the cases powder capacity and as the throat wore I could chase it up the barrel!!!

Powder choice of RL 17, 19 and H4831SC would seem logical and Quick Load conﬁrmed this also. I started with the H4831SC and RL19 powders and when a bullet choice with these was established I would try a few alternative loads with the faster RL17 for tasters. (See tables)

Because the Sierras are easily available I switched to the RL19 powder, with a load of 35.5-grain, SM cases at 2.5850” COL and achieved really consistent 10 –12 fps variation in velocities at the 3040 fps level. Accuracy was great; 0.35” groups were the norm with the occasional bug hole, no need to mess around with that one! Out of interest and as stated earlier, I wanted to see if the different primer types/sizes and case makes/designs would make a noticeable difference.  The reality was there was little detectable difference.

Likewise if you want to make your life really easy and avoid a few forming steps as with the Satan brass dimensions then Dave Kiff has reamers for the .22-47 Lapua version (Satan Mk2) which will only need a neck reduction and all the data from the .22 Satan will be relevant. I have reamers for both but elected to stay with the original Mark 1 Satan version.

If speed is your aim then the 75-grain A-MAX would not disappoint with velocities reaching over 3400 fps! For those of you who want a game bullet then the 60-grain Partitions were a real surprise. Those little Noslers came out of that 28” tube at over 3618 fps and generated 1744 ft/lbs of energy! Best of all the accuracy from those ﬂat base bullets consistently shot one hole groups, superb. Equally the 75-grain Swift Sirocco with either H4831SC or RL19 gave great velocities and solid accuracy for deer-sized game.

I am pleased with the .22 Satan; the 90-grain bullet travelling at 3050 fps has good trajectory characteristics and hopefully good barrel life.  The real surprise were those 60-grain Nosler Partitions that shot the tight groups and for deer use, where legal, the Swift Scirocco 75 grain bullets makes the .22 Satan a dual role vermin and deer calibre where legal.

Whether the .22 Satan is any better than a fast twist .22-250 is academic really, it is just nice some times to own something a little different. Dave Kiff has all the reamers for the Satan range and the newer versions on the slightly longer 6.5x47 Lapua case, so if you want a very efﬁcient no nonsense long ranger varmint or small species deer round then give him a call.

EDITOR’S NOTE: In England and Wales the only deer species you can shoot with a 22 centreﬁre are Muntjac and Chinese Water Deer with a mandatory minimum bullet weight of 50-grains and an energy of 1000 ft/lbs. In Scotland roe can be taken too within strict energy, bullet weight and velocity parameters.