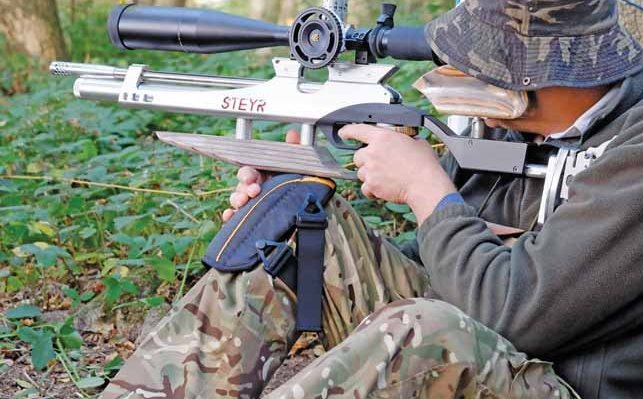 In my humble opinion I think that Field Target shooting has been around long enough for us to have some kind of Hall of Fame. Not that I am going to go down that route as my memory for names is terrible, so any thoughts I have on who should be in it would consist of shooters whose names I can remember (my own and one other), regardless of whether or not they are worthy of a place.

When it comes to equipment however I reckon I can come up a few iconic items that have shaped, or become synonymous with FT. Of course this is just my personal opinion, and a very small selection, as to what I might put in a museum dedicated to this discipline, but it is quite good fun to think back and daydream about such matters. You could even pass the time on those long journeys home from shoots arguing about this subject with your travelling companions, it has to be better than ‘Eye-Spy’.

Oddly enough the first thing to pop into my addled mind when I started to think about this subject was something that is rarely given a second thought once purchased, but the role played by my first choice cannot be overstated. This humdrum item, well the humble scope mount, not just any scope mount though, the Sportsmatch variety. Their range of mounts is huge, this wasn’t always the case but even so it has always suited the needs of the FT shooter. I might even go as far as to say their standard model is a design classic in every sense! It combines function and form perfectly as all good design should. This is proved by the very fact that once fitted in between scope and rifle it can be completely forgotten about. Sportsmatch even manage to keep the price keen too, what more could you ask!

The Sportsmatch scope mount is a hard act to follow, but it seems sensible to select a scope as my next item. This is a tricky one as there are many potential contenders. From the early days of FT you could select the Tasco 2-7x32 for instance, although I feel something with range finding capabilities would be more appropriate as it plays such a big part in what we do!

That could lead in the direction of the Premier Reticule boosted Leupold optics so popular in the 1990s, but I don’t feel I need to keep looking to the past either. My iconic scope is the one I suggest any newcomer to the Sport of FT should seriously consider buying, the ‘Big Nikko’. Or to give it it’s proper title, The Nikko Stirling Diamond Sportsman 10-50x60. This product when it first appeared on the FT scene allowed shooters to buy something capable of range-finding any target and at a very reasonable cost! That isn’t to say it didn’t have the odd issue, but now in its Mk 3 guise it has many fans and has been part of many a winning combination. Oddly enough I have never used one in competition but I’m not letting that stop me making it one of my FT icons.

I perhaps ought to add a gun to my list and complete a rifle, scope and mount combination. It is well known that I love my Air Arms and there are plenty of contenders from amongst their current range and back catalogue to choose from but I won’t. The obvious choice would be the Weihrauch HW77, my first rifle and undoubtedly a legend in its own right. I am going with something else entirely though and returning to Sportsmatch and their GC2. A picture of this rifle wouldn’t have looked out of place next to a Sam Fox or Lamborghini poster in an air rifle loving teenage boy’s bedroom. Unfortunately for me the GC2 was just as out of reach as Sam Fox or the Lambo!

I have so far chosen relatively cheap products but the GC2 was far from that at the time of its launch and even today you would think twice about handing over your credit card for one. It did perhaps signal the way forward for FT rifles in so much as it was a no compromise design for which indeed many people were willing to pay the price as they do now for the current crop of super air rifles. I do wonder if I should seek out a second hand example of the GC2 as it is one of the few designs I haven’t owned, but on balance I think I’ll leave it be as a teenage dream.

Moving swiftly on I am going to include one more little item before my final choice. Butler Creek, flip-up lens caps are simply very good at what they do and once again they are very cheap. The reason I include them here though is because I think they are cool and can be seen used by snipers on screen in numerous movies, enough said.

Finally probably ‘THE’ FT icon, what else but the Nockover target? There are many imitations on the market but when I’m looking through my scope, crosshairs lined up on my point of aim, if it is a Nockover target in the picture I know that a clean hit will take it down. If once I have taken my shot the target is still standing 99.9% of the time it will be because I have missed. As a competition shooter I want a solid and reliable target, especially as FT competitions are so closely fought these days. There is nothing worse than leaving a target wondering if it has malfunctioned. Whether in the shape of a typical airgun quarry species or simple round or square shape, for me those silhouettes are a thing of beauty.