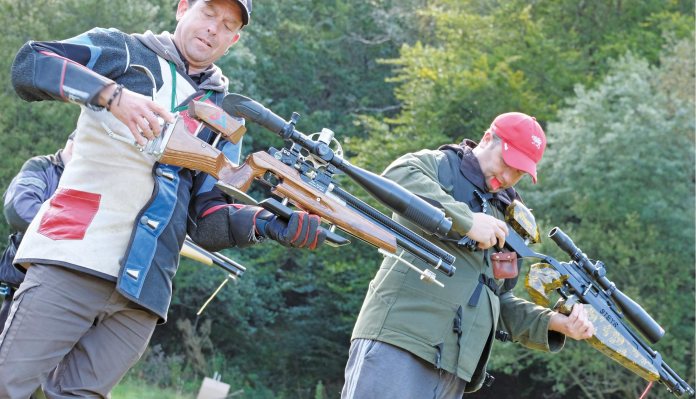 I have been wondering lately if the spectacle of the shoot-off is becoming a thing of FT history? It certainly doesn’t feel like we see as many as we used to, but maybe it is just my own perspective and not the actual reality, into which I only occasionally dip my toes. I have a suspicion too that because I’m not perhaps as good as I used to be, that I’m not involved in such things, so I pay less attention to them.

It makes me a little sad to think of the demise of what I consider to be such an important aspect of FT, and here’s why I fear the shoot-off is in decline.

A few months ago, while talking about the 2015 BFTA Grand Prix series, I had (as is my way) a little chunter about the format of the event. Remember this is the mainstay of summer FT and at each round there are trophies for those who finish in the top three of their respective grades. Now that’s great, no complaints from me there! However, as each round is shot in two sessions, AM and PM, if the top scorers on the day happen to be from the AM session in all likelihood they’ll be at home rubbing themselves down with an oily rag by the time the trophies are presented.

Also, by the time the PM shooters have finished, most of them have only one thing on their minds and that is getting home for a rub down with an oily rag. The result is very poor attendance at trophy presentations, which in itself is a real shame, and people who might be involved in a shoot-off for a position are either not there or have packed up their rifle ready for a quick getaway. Even if the required participants are willing to shoot-off, it is generally sorted out in a very tame manner, with little in the way of ceremony and no tension, as there is no audience (or sometimes even a marshal) to witness the spectacle.

Many winter leagues, such as the one in which I participate, are just that, leagues, and don’t offer individual round prizes, so there is never a requirement for a shoot-off. So for much of our shooting year you’ll be unlikely to see a shoot-off. I have though recently been given reason for hope; not necessarily for the regular occurrence of shoot-offs, but that the art form won’t be consigned to the muttered reminiscences of wizened old FT shooters, sitting in the club shed dribbling from their thermal mugs.

I was witness to a wonderful shoot-off for first place at the 2015 NEFTA Classic and the BFTA European Championships, which was decided by a three way. These shoots need an outright winner and the format of each is such that competitors are more likely to be around as participant or spectator should the need arise.

The competition that really got me thinking that all was not lost was The Showdown. Hosting club Blaenau Gwent laid on a spectacular event for the competitors and everyone seemed to have a thoroughly good time (helped along by the weather it has to be said). The Showdown has had its ups and downs over the years, it was once a highly sought after title and just to qualify for one of the 64 places and shoot in the competition was an achievement of which to be proud. For some reason though the allure of the competition faded to such a point that those who had qualified wouldn’t bother to turn up for the shoot. A disaster for a ‘Match Play’ format that meant shooters could sometimes find that they were in the third round without having to fire a shot.

Some nifty management of the qualifying and event organisation over the last couple of years has meant we have once again seen the all important first round consisting of the full complement of 64 competitors. The places left open by qualifiers not wishing to compete have been filled by those wishing to and who may not have shot well enough over the preceding shoots to qualify.

Now those shooters drafted in tend to be relative newcomers to the sport and consequently from the lower grades. It could be seen as sending lambs to the slaughter, but the Showdown is a funny old competition when it comes to the form book throwing up surprises year after year. In doing so it gives those enthusiastic newer shooters a chance to go head-tohead with some of the FT ‘Big boys’, which is great fun!

The result of the Showdown management policy is that a new generation of FT shooter has had a chance to sample one of the classic competitions. So whetting their appetite not only for future Showdown qualification by right but the shoot-off format in general. So I reckon the Showdown is back on track, to once again become the flagship event it once was; especially if future events are as well run as the one at Blaenau Gwent.

I’ll just sneak in the Showdown result. The final pair of the initial 64 competitors after five rounds and 100 shots (it’s a long day if you shoot well) consisted of Jack Harris and Steve Privett. Jack has barely put a foot wrong this season, and perhaps that was on Steve’s mind during the final and the trophy went to a super cool Jack who missed just one target to win by 19 targets to 16.

So it looks like the future of the shoot-off is secure. The Showdown reminded me just how much I enjoy that indescribable feeling that only a shoot-off can give. If you haven’t experienced it, the next time you get the opportunity to stand side by side with a fellow competitor shooting for the right to be called a winner, take it. I promise you won’t regret unpacking your car or getting home ten minutes later than you’d hoped. Speaking of which, where’s my oily rag?