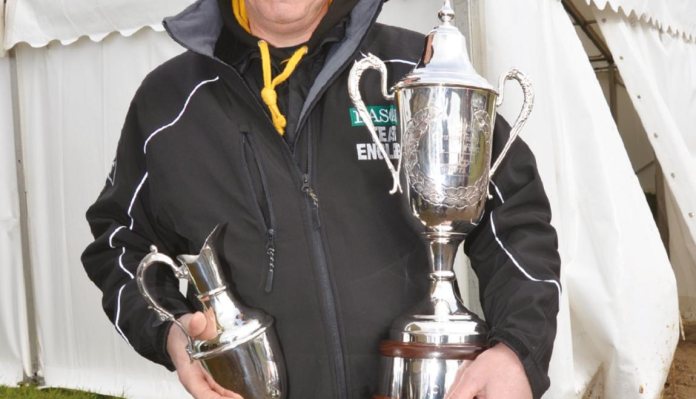 Our World HFT Championships is a unique event, and with 360 competitors descending upon Kelmarsh Hall, for the big occasion, there’s always a great atmosphere at this flagship competition, and this year was no different. A sizeable contingent of foreign shooters take part too, and with teams from around the world sending their keenest shots to try and lift the silverware, it makes for a genuinely exciting tournament. Generous sponsorship includes cash prizes and an Air Arms HFT500 rifle too, as well as some very nice trophies, so there’s plenty at stake! Two target courses lay in wait, and the idea is that competitors are designated one on the first day, and the other on the second, with the aggregate score taken overall, out of a possible 120 points. That’s the idea.

The only fly in the ointment was that the week before, had been spent discussing a certain forecast that covered our intended venue. Just about everyone I spoke to began the conversation with ‘Have you seen those wind speeds?

Panic over the weather? Me? Don’t be ridiculous! OK; I will admit, I do have something of a reputation as a ‘southern softie’ and for running for cover at the slightest hint of the wet stuff. But with the forecast for the Worlds (tail end of March) including the rude arrival of Storm Katie (yes it is absurd that the Met office feels it has to name everything these days), I let my knee positively jerk, into reaction. One car crammed full of three changes of rain proofs and all manner of weather cheating paraphernalia later, and my travelling buddy Peter was pushed to enquire as to just how long we were intending to stay!

Day 1 was bad enough- high winds due to come in, and on/off rain showers throughout; but if day two materialized as specified, with set in heavy rain, and wind hitting 50, yes 50 mph, we were surely in big trouble.

Well, come the big weekend, we can’t say it was without incident, but the saving grace was that rain didn’t arrive until during the night; a minor miracle, so all our kit remained dry over the first day! Testing wind and a spread of targets both inside the wood and out, guaranteed a full challenge for even the most experienced shots among us! After a full day’s action, Simon Howarth emerged with a clear lead on a superb 57 ex 60, with seasoned campaigner Dave Ramshead, and Scottish hope, Grant Thomson both breathing down his neck on 56 apiece.

After much wheezing and a ton of effort, I managed a 52, which, given the windy conditions and testing layout, turned out to be a tidy score. What took the edge off for me though, had to be my loose finishing, and missing a ‘full size kill’ supported kneeler, was a bad error early on. Unforgivable though had to be missing a simple 8 yarder, which I shall have nightmares about for some weeks to come. A final loose twenty odd yard small kill out in the field, and I was left to rue what might have been!

There’s a huge social aspect to these events, and staying overnight in a hotel is an opportunity for a good chat and a mull over the day’s results with fellow fanatics/ enthusiasts. Come the next morning, black clouds had moved in, hanging over the evidence of a good nights rain lashing.

Arriving back at Kelmarsh we were soon to be greeted with the news that the country show itself had been cancelled, due to inclement weather, and that the implications of that were that insurance that covered our event was effectively invalidated! Oh dear. With forecast heavy rain, further winds in the region of 35-40mph expected, and vehicles already being towed out of thick mud, right left and centre, things were not looking promising. Why even the portaloos had blown over!

At this point, I wasn’t envying Pete Sparkes and the shoot organizers, for agonizing over their next move. Letting shooters enter the wood, in high winds with the prospect of no insurance, was not something they could seriously entertain, and after careful, painful consideration, the decision was taken to scrap day two, and base the championship purely on results from day 1! And all things considered, I wholeheartedly agree with the decision taken.

So, step forward Simon Howarth, 2016 World Hunter Field Target Champion. Commiserations perhaps to the chasing pack, that didn’t quite get the opportunity to try to close the gap, but what we do have, given Simon Howarth’s superb record of late in a host of events he has attended, is a worthy and fitting winner.

For my part, I finished in 16th place, but one more target would have made the silverware, and two more a solid placing. Ho hum, lessons to be learned, but an encouraging start for the season nonetheless. Thanks to all who put in the hard work for this event, and also the sponsors- JSB, Air Arms, Sure Shot Airguns, and Countryman Fairs.

Onwards and upwards; as for my on-going rifle project, I used my incredibly accurate back-up Air Arms S400 at Kelmarsh, having made the executive decision to put my latest acquisition to one side until I have sorted the stock. I’m finding the cheek-piece on the new custom woodwork just too low for my liking, so an adjustable mechanism is being sorted for that; hopefully in the next couple of weeks, and I’ll give it an airing once it’s up and running. Next up will be the first HFT Masters round in Cambridge, and I’ll be hoping for great things there. Until then, shoot safely!