HFT Diary - Going on the Pull 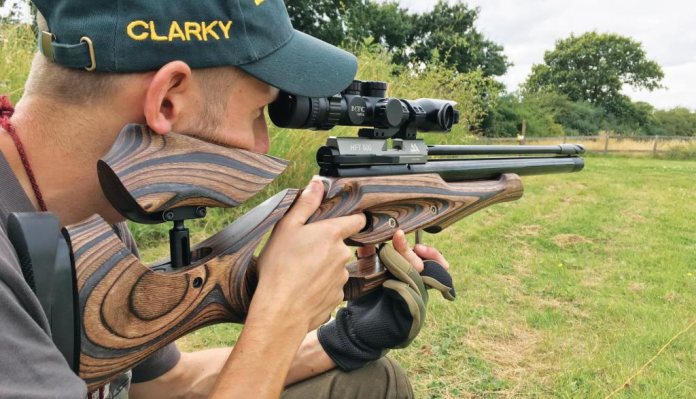 Back in the ‘80’s, I was involved in staging quite a few national Field Target (FT) events at our club at Markyate. It took a lot of effort, but when a good hard core of members pull together and work as a team, the results, when a big national event comes off, is immensely satisfying. Stage a national event, and reliability of the targets becomes paramount, to the smooth running of the day. One problem we never had to deal with though, was the phenomenon of ‘pulling’ targets; a subject I have briefly mentioned before.

This is where a knock-down style target on a competition course is deemed to be faulty, and can’t be repaired, or is up a high tree, and can’t be reached easily. In this case, some targets have then been removed, or ‘pulled’ from the course, then subsequently ignored for the purposes of the competition course, and all competitors awarded two points for it. Another example could be a target with a reduced mini kill (15mm), where it is suddenly deemed that a shooter can’t view it from the prone position (a requirement in the rules for that type of target). It could again be ‘pulled’, and everyone awarded two points, irrespective as to whether or not they hit it!

These are just two examples, but as you can see, awarding two points here and there in this manner, can distort scores. Admittedly, we now get less incidences as target reliability has improved, but on very bad days, when three or so have been pulled, this can make a mockery of the results, even resulting in a different winner in some circumstances.

So, is it time to get tougher? Well, I reckon we do need to apply some logic. If a target is deemed too awkward to even reach during a shoot, then the simple answer is don’t place it in that position. If foliage is suddenly in the way of a kill zone (it can grow quickly overnight), that wasn’t there when the course was laid out, then I would say, just take the view that that is how it is. We can always stand at the end of the day, and that has to be preferable to dishing out unearned points! And amend the rules to consider these scenarios. As for targets that genuinely break, spares should always be waiting in the wings. The business of having the right kill size can be sorted by using a target which has a bigger kill zone and accepts bolt-on reducing rings- a variety of which can be held in readiness. I appreciate odd sized targets can throw up queries, and it may not be perfect, but again, ‘pulling’ just has to be avoided at all costs. It’s unthinkable in the world of FT, and it should be eradicated in our HFT format.

The other main glitch that can largely be tackled, is where competitors are allowed to continuously call for targets to be checked by a Marshall. Clip the edge of a kill zone and get a ‘split’ and quite often just part or all of the pellet will be deflected towards the centre of the paddle. I’ve seen this up close at my own club testing target with a classic half-moon impact on the edge, and a fleck sent into the paddle. This can sometimes give the impression of a direct hit from where the shooter is taking the shot, yet the target correctly fails to fall. Very rarely we may experience a fault, (a caught or tangled reset line, or a badly maintained hinge in need of some oil), and the Marshall now has a spring-loaded checking device to test the mechanism. But more often than not, hitting the edge of the kill zone is the issue and pilot, not target error. Having an open door policy, where anyone can continuously claim to have scored a hit, forcing the Marshall to stop the shooting and walk up and check the target, can on certain days, be disruptive and irritating, especially for newcomers trying the sport for the first time.

Again, a tougher approach would be in everyone’s interest, and I personally would go along with the way the Czech Republic (and apparently NEFTA HFT shoots in the UK) operate, whereby, if you query a target, you score zero if it is deemed in perfect working order. Probably, at a stroke problem solved, which will make those doing it think very hard before they do.

I did my bit back in the day with Markyate/ Broomhills and hats off to clubs that stage national shoots now, putting in all the effort and hard work on our behalf. Nothing will ever be perfect, but I do think a more rigid approach would now benefit the sport. Make ‘pulling a target’ a thing of the past, introduce an element of risk to getting a target ‘checked’, and Hunter Field Target will have taken a huge step forward; certainly, in terms of maintaining the integrity, of what is fast becoming a global sport.

HFT Masters are looking into holding their World title event in England at the Northern Shooting Show.

HFT Masters have been developing their website at www.hftmasters.net so it should be confirmed soon. They also use www. facebook.com/hftmasters/ . For details of their own World Championship, check out www.whfto.com