HFT Diary: The World championships and a new junior comp 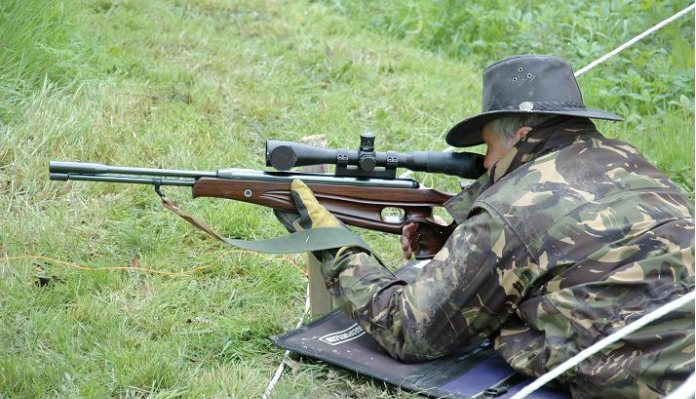 All eyes on Kelmarsh, and aren’t we lucky? For Kelmarsh Hall and the Country Fair, once again play hosts to our top event of the year- the World HFT Championships, held at the tail end of March. This year it actually kicks off the season proper, and what a way to start?

A two day event, held over the Easter weekend, is an exciting opener, and with the big title up for grabs, there’s always some sleepless nights at the half way point- for those who manage to keep their scores tight on day 1. Staying in with a shout is the name of the game, but the excitement and unique atmosphere that this tournament creates, has to be experienced. Shooters from all around the globe converge on sunny Northamptonshire for this one, and it’s an event to savour for sure.

I can’t help thinking that with the growth of Hunter Field Target, as an increasing number of countries take part, so there will be an inevitable clamour for the tournament to be staged by other nations around the world (maybe a few years down the line)- much in the same way that Field Target has now evolved. In other words, enjoy the current set-up whilst it lasts, and is effectively on our doorstep! 33 countries at the last count, now practise FT, and the World title rotates around willing nations, with the UK having to wait its turn. HFT is seriously on the up, so it’s unlikely we’ll get it all our own way for too long.

The entry book opened late last year, but the field of 360 participants has long since filled and closed. That’s quite a figure, and a genuine spread of nations are included, which really adds to the occasion.

Take this title, and it surely sends out a broadside to the chasing pack for the rest of the year! As it stands of course, the UK still fields some of the best shooters, and there’s several familiar faces that are once again in the running. Richard Woods may be ever the joker, but his professional approach stands him in good stead. A top ten finish is almost inevitable, but he has the ability to go all the way. Dave Ramshead is a seasoned campaigner and another top class shot that has come painfully close in previous events. Could this be his year? Several others join that group of contenders this time round, and Simon Vant has earned his place on the list, after a blistering finish in the 2015 Series.

OK; I’d never count myself out; stop that loud sniggering in the back! But the smart or ‘serious’ money if you prefer, would have to be on a certain lady that has simply torn through the ranks over the last couple of seasons. From what I’ve seen, Theresa Reed will take some stopping, and I’m not just talking about the Ladies title! All to play for then.

In light of the recent sad passing of Pat Farey, the much loved Editor of Gun Mart, we have been informed by Ian Bainbridge and Roger Lait that HFT Masters will proudly host a new Junior competition in Pat’s name:-The Pat Farey Memorial Junior Championship, sponsored by Gun Mart and Shooting Sports magazines.

Ian said: “We at HFT Masters are honoured to have been asked to hold a Junior Championship in the name of Pat Farey. As some of you may know Pat passed away recently while editor of the Gun Mart magazine and the publication have asked HFT Masters to run a competition throughout the year to honour his name. This will take place at five events throughout 2016, with the final to take place at Lea Valley Air-Rifle Club in October. At each event, the top three juniors will qualify for the final at Lea Valley. As usual, all juniors will shoot for free at all HFT Masters events.

Trophies will be awarded at each event, but at the final, there will be prizes for the first three places, with the Pat Farey Memorial Trophy going to the winner; a perpetual trophy, to be held for 1 year.”

For pre-booking application forms and downloads regarding established UKAHFT events (where bookings are still possible), and all the latest information on anything connected with Hunter Field Target shooting, take a look at the following websites: https://sites.google.com/site/ukahft/ and www. shooting-the-breeze.com https://sites.google.com/site/whfta1/ In addition, details of the new HFT Masters events can be seen at www.hftmasters.net