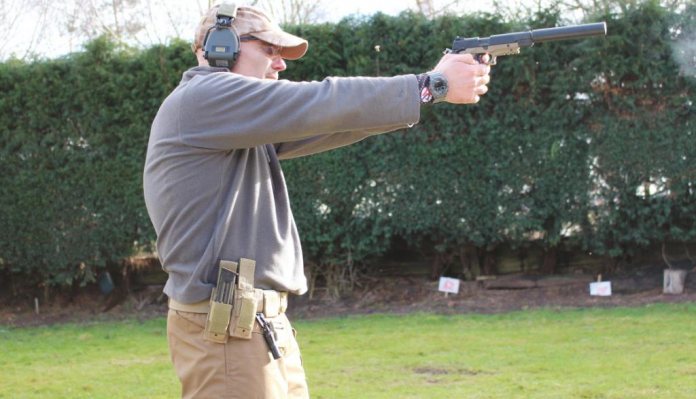 Let’s start with my experience of Long Barrel Pistols and revolvers (LBPs & LBRs), which are the UK legal options of handguns available on a Section 1 (Firearms Certificate FAC). The law states that to be a Large Firearm the barrel must be a minimum of 12” long and the overall length no less than 24”. This is achieved on a pistol chassis by adding a fixed, metal extension to the grip frame to conform to the legal requirement.

Truth is, you’ll either love or hate these guns and pre-ban shooters, who wistfully recall the heady days of ‘proper pistols’ fall into the latter category. However, more post pistol ban shooters embrace them, particularly with the growing interest in ‘practical’ disciplines.

I have owned my LBP for a few of years, and it makes me smile more each time I shoot it, but compared to a rifle, it is totally unforgiving! So, if you don’t practise you go backwards quickly, but I have definitely got the bug. I and another Red Flag member came across them first in the club one evening whilst shooting a ‘Timed and Precision 1 comp’, (the old PP1) with Mini Rifles. The guy on the line next to me had what looked like a Colt 1911 .22 semi-auto pistol sporting a fake can, and a weird bar poking out the back. “That’s just the jobbie for me” I thought, and started up a conversation.

I quickly found out that the specific legislation prohibits anyone without LBP/ LBR actually handling one, which is a bit of a mystery really, as it prohibits you from ‘trying it out’ before committing.

However, I looked into it more, the price was not prohibitive, and it was something ‘new and shiny’ so, obviously in goes the variation, 6-8 weeks later, LBP on the licence. After lots of research, both of us bought GSG 1911s and a fist full of mags each, which seemed the best ‘bang for the buck’.

First thing first; safety! Rifles are long and easy to control, but a short/light and butt-less handgun is another matter. So you need to be more aware of what you are doing to avoid the dreaded ‘muzzle sweep’! I learnt some really good pistol safety drills from some of my local club pre-ban handgun guys and stole their ideas. If you haven’t guessed; I’m a post pistol ban shooter, so I had no reference point. What I did know is that on a good day I’m a pretty decent rifle shooter and this is just another gun right?

First things first, hitting perfect ‘300’s’ at 20 yards with a .22 pistol with iron sights - although I am sure is perfectly doable, not by me yet! Initial frustrations aside, learning a whole new range of skills is the exciting part and a rewarding experience. For a while now all members of Team Red Flag have added an LBP to their collection, which we use predominately for Practical competition both ‘inter-team’ and via UKPSA postal league.

This is a great opportunity to stretch your skills. Not only do you need to become a consistent and competent pistol shooter, but also there are elements of movement, holster drawing and reloads to contend with. It’s safe, exciting, full of pressure and a real ‘brain game’.

I would warn you though, once the pistol bug has got you, it’s contagious! Following the LBPs two of us have now added Long Barrel Revolvers to our collections. How can I sum up LBRs? Well, .357 or .44, so bigger holes and bigger bangs, single and double action grins and smiles; what more do you need to know?

We are all shooting either GSGs or TSCS, basically the .22 1911 with 12” barrel and obligatory ‘coat hanger’ hanging off the back. Though it’s not the same as a ‘proper draw’ from the holster, but after a lot of repetition training, your brain and hand does finally adapt to the demands of the elegant design criteria dictated by UK legislation.

First stage of 6 shots, two on each target @ 20m. Iron Sights, shot by a 48 year old short sighted man. I have a choice – I can either see the sights or the target, what could possibly go wrong? Shooter ready, standby; not bad some As, sprinkling of Cs and one miss! Moved forward for subsequent 12 stages, mostly @ 10m, so much better for the pistol. Drawing from the holster, up fast – multiple shots per target. Most details consist of two stages, first with ‘maximum’ shots – fine.

Second then offers an option of ‘minimum’ shots, so it’s the trade-off – accuracy V time; so, do you get ‘more rounds down’, versus the extra time you lose?

Then the fun began; let’s stick in a reload between stages, then weak hand only, then the ‘piece de résistance; offhand shoot and reload, and repeat. I can’t really recall how that went and I seem to have blocked it out. End on a high with some great but simple disciplines; 6-rounds at one target fast as you can, then 1 shot each on five targets, reload and repeat as fast as you can. I deny anyone not to smile at that!

Ok what have we learnt?

More than anything, pistol shooting in competition is about teaching your muscles to draw and pull that trigger consistently. You have no time for a deliberate aim if you want to achieve a decent time.

This can only be achieved with hours of practise, and lots of ammo. Speed of getting off that first shot is key; if you don’t get that down fast, might as well take up golf!

Also, I have to remind myself it is a pistol, with iron sights. It’s not a £2k comp built mini rifle with telescopic sight and red dot, so don’t be so hard on yourself! When looked at it from that perspective; you know, it was a respectable result. Also, with pistol, I feel there is more opportunity to grow and improve, as its ‘all you’, it’s actually more fun, and certainly more rewarding when you get it right.

Please check out the Team Red Flag website. I’ll be back with features on tips and techniques and gun types; good and safe shooting!