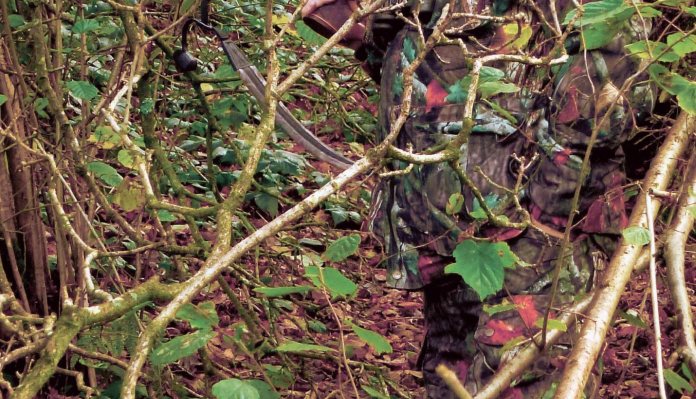 Founded in 1985, Highlander Outdoor (not to be confused with shooting equipment importers/distributors Highland Outdoors) has built a strong reputation as a supplier of thoroughly affordable and practical outdoor gear. As well as cornering a fair piece of the camping, travel-accessory, and general leisure market, they have developed an extensive range of products to meet the requirements of service personnel. This alone is testimony to the company’s ability to find a winning combination of desirable design features, durability and affordable pricing. Nevertheless, there was one sector of the outdoor market they had never catered for directly… until now.

Yes, Highlander has finally brought out a range of clothing and accessories designed for shooters, and have licenced Irish firm LR Active’s Tree Deep camouflage pattern for the purpose. Tree Deep is a ‘photo-realistic’ design that uses the tried-and-tested formula of overlaying a detailed, highcontrast foreground of deciduous leaves, branches and twigs on a blurred, low-contrast background. The strategy behind such patterns is to draw the eye through the foreground detail and into the background space, disrupting not only the outline of the wearer’s body but also viewer’s sense of it as a solid object.

One area where Tree Deep differs from other designs is in its use of super-saturated greens and russets in the foreground detail. As well as jumping out at the eye, which accentuates the contrast between the foreground and the background, the greens and russets imitate the highlysaturated colours found in nature, and each will engage with the predominant colour in the natural surroundings, so that the pattern seems greener amid green foliage and browner among the autumn leaves.

Meanwhile, the choice of a mid-toned grey-brown with smaller and more muted russet/green blotches for the background also works well, especially when seen from a distance.

So, the camo looks pretty good, but what about Highlander’s gear? I’ll be looking at some of the other items in the new range later, but the subject of this review is Highlander’s Rexmoor jacket and trousers. These are designed to provide a wind-and waterproof outer layer that lets you keep your camo and pocket layout constant whilst giving you the freedom to add whatever base or mid layers you need. So you can stay concealed, capable and comfortable whatever you, or the weather, are up to.

Between its polyester/ polyamide lining and outer shell there’s an Ab-Tex membrane that keeps the weather out and body heat in whilst allowing perspiration to escape. Ab-Tex is rated to 5000mm/5000MVP, which is typical of mid-range garments and more than adequate to keep out even driving rain. Seams appear simply to be stitched rather than bonded and/or taped, however, so these are potential weak points for water ingress.

The outer fabric has a soft feel and a matte surface, but it’s not totally silent, whatever the label may say. Some noise is also produced by the glossy but tough lining. The membrane, however, feels soft, flexible and noiseless by comparison. Overall then, the Rexmoor suit is no noisier than others in its class, but still some way from the Holy Grail of complete stealth.

Getting In A Flap

Highlander’s relative inexperience in the shooting market may account for the fact that all the flaps on the external pockets, and the storm flap over the double-ended zip at the front, have bare metal stud fasteners. These may be the dull colour of the ones on your jeans, and have a nice Highlander logo on them, but they still catch cold when the temperature drops, and clink tellingly against twigs, wire and gun alike. Indeed, there’s even an extra brass tag carrying the Highlander brand riveted to the bottom right-hand pocket that seems to be made for this purpose.

There’s no scratchy Velcro, however, as the sleeve cuffs are elasticated and the ankles are equipped with toggle-locking shock-cord adjusters to cut out drafts and reduce drips. The latter make it easy to ‘blouse up’ your trouser bottoms, but mean that it’s more comfortable to wear your trouser legs outside your Wellingtons.

Similar shock-cord adjusters are present at the hem, at the waist, and around the hood of the jacket. The hood is lined and rolls up inside the jacket collar when not in use. It is also a good shape, and fastens under your chin by means of its own loops and toggles. The other adjusters are neatly tucked away behind the hem and under triangular flaps at the waist to avoid snagging.

On the trousers, the waistband sports belt loops, elasticated sides, and a raised arch at the back. This is a bit small to keep out drafts but does serve as a mounting point for two OD buttons. I thought at first these were for braces, but they can’t be because there’s only one matching button at the front and that’s above the zippered fly.

Let’s move on to the pockets, then. The trousers have seven: a pair of side pockets with plain angled openings; a pair of back pockets with zips under studclosing storm flaps (one with a brass tag); and a pair of bellows-type cargo pockets with stud-closing storm flaps, one of which also has a zippered inner pocket. I found the side pockets a bit shallow, and for security would have preferred them to have zip closures or be deeper, but I liked the position of the cargo pockets, which are well forward of the side seam, making them more accessible.

On the jacket there are nine pockets: four at the front, a double-ended game pocket at the back, internal document and mobile-phone/ radio pockets, and handwarmer pockets accessed via an opening at the back of the lower front pockets that lets you slide your hand behind them, provided they aren’t full.

All the other front pockets are of the bellows type with stud-closing storm flaps, though the larger lower pockets have two studs and the smaller upper pockets have just one. None have zips. The game pocket, meanwhile, has zips tucked under a storm flap at each end, but no third zip at the top to allow it to open for cleaning. The openings are also a bit narrow, so getting a bird or a bunny in is a bit of a performance. Inside, the document pocket is in its usual position on the right, and sensibly has a zip closure, whilst on the left the comms pocket is located mid-way between the upper and lower external pockets to avoid double-stacking gear.

I’d like to see a different arrangement for the upper front pockets, as the bellows/stormflap layout seems designed to snag your gun mount. A cleaner design, as found on Highlander’s Morland jacket (currently available only in green) would avoid this potential problem. Also desirable would be an externally-accessible comms pocket to let you get at your phone or radio without opening up the front of the jacket.

Some aspects of the Rexmoor’s design could do with a bit of fine-tuning to suit shooters’ requirements, but it’s great to see Highlander Outdoor taking an interest in our sport, as major crossovers like this are all too rare.

Final thoughts: I really liked the fit and cut of the suit, and found it light and comfortable to wear, as well as an effective barrier against the wet and blustery weather that coincided with its arrival. The price, under £70 for the jacket and under £60 for the trousers (whether you get them in OD green or Tree Deep camo), also adds to their appeal, as does the Tree Deep camo pattern, which is well-suited to the seasonal variations found in the UK. Highlander Outdoor already have well over a dozen items in their Tree Deep range, and I’m sure there’ll be more to come. I look forward to it.