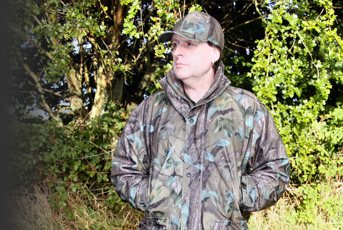 Over the last few months Jack Pyke has teased us with ‘blank page’ adverts for their new camo pattern – English Woodland. Finally it’s now available to the shooting public but as there’s been much secrecy it might have a lot to live up to… Intended as an all-year round design where foliage is and woodlands are part deciduous, it came into being over 6 months after examining our countries local flora and fauna.

Jack Pyke undertook extensive photography of local vegetation and woodlands and tried many different designs and layouts before they created one they were totally satisfied with. To quote the company, ‘As with the English Oak, it is we feel more suited to our countryside.’

Now I pretty much agree with that statement as one look at the heavier green and light to mid brown tones used in what in essence is still a photo-realistic tree branch, leaf and bark pattern and it does have more of a balanced appearance. By that I mean it isn’t totally reliant on exact copies of foliage as some other photo–realistic designs are. Instead the colours used tend to blend in better with your average UK woodland-type scenario and work together as a whole.

As a camo design I can certainly attest to the fact that English Woodland certainly works well. On test are JP’s tried and tested Hunter jacket and trousers and Stealth baseball cap, which they decided to launch the new pattern with.

All are manufactured from the same stealth fabric making them breathable, waterproof and silent. The jacket has an outer shell of 100% polyester brushed tricot with laminated membrane. The lining is made up of 100% polyester with brushed mesh and taffeta. The jacket features a full length, double opening, zip and storm flap, concealed hood in the high collar. Stowage goes to two lower front bellows pockets with cartridge holders, two hand warmer slots, one internal chest pocket and a final and nice touch is the fold-down seat flap at the rear. The cuffs are designed to keep out the elements having elasticated weather shrouds inside the Velcro adjustable cuffs.

The trousers are made from the same material as the jacket and are a pull-over design with elasticated waist, so easy to put on when required - even over boots. They’re also easy enough to roll up and keep stowed in your rucky just in case the weather turns wet.

They feature two upper pockets with weather flaps, two cargos on the sides with flaps and press stud fastening. At the cuff are 14” leg zip for easy removal or slipping into without the need to remove boots, they also have Velcro adjusters to cinch tight around your ankle. A nice touch is the press stud fastener that strengthens the zip area midway along its length. They’re also reinforced at the seat and knee areas.

Virtually all the English Oak range from gloves, faceveils, headwear to luggage will be available in English Woodland. Quite frankly I see no reason why it won’t be as, if not even more popular with the British hunters than JP’s original camo pattern. So is one better than the other? Well only you can decide on that…

FOR - Always good to see a new camo pattern and this one seems to be the full shilling
AGAINST - If you already have English Oak will you bother with English Woodland, given it’s the same clothing?
VERDICT - Nice alternative to English Oak and well worth a look if you are considering cost-effective camo clothing