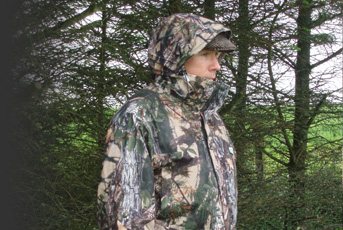 Ridgeline clothing from New Zealand is manufactured to the very highest of standards. The Ridgeline designers work to produce garments that not only keep the hunter protected whilst out in normal weather conditions, but should the worst happen and he finds himself in a survival situation on the rugged cold wet mountains of New Zealand these clothes will keep him alive. So when viewing the Ridgeline range of clothing we are not just looking at hunting gear but clothing that goes one step further, to become serious mountain survival gear.

The Torrent coat is a good example, being designed to cope with the very worst weather that you can imagine, especially when heavy rain is involved, and I was able to put this to a serious test as we had several months of record rainfall up here in Scotland. With rain plunging vertically from the heavens, each huge drop falling like a small hammer blow, it put the very best of clothing to the test. The Torrent had to endure this downpour day after day, and I have to say that it passed the test with flying colours the seams exhibiting no weak spots and the incredible hunter’s hood -designed for full all round vision - keeping the thinking part of the body dry as a bone and thus fully functioning. Tests have shown that once the head has become seriously wet, morale begins to drop and judgement becomes impaired in a survival situation. This can be fatal but with the Torrent Jacket you will have no such concerns.

For those involved in close quarters hunting it is also useful to note that the waterproof jacket is made from a silent fabric known as Quiet Tex, which is also abrasion resistant. Furthermore, the 100 plus hours of testing I subjected it to both in the field and in an agricultural environment on the smallholding do bear out the fact that the soft touch fabric - which at first inspection appears too lightweight to be tough - is in fact a very robust material. It would certainly cope with anything a hunter or beater in this country can find to throw at it.

The camo pattern used on the Torrent is a New Zealand design is called Buffalo Hide and Seek, and though it is somewhat ‘busy’ my tests have shown that this New Zealand design works just as well as any other pattern in the UK environment and better than most.

I was very impressed with this extremely light and comfortable jacket designed for a full range of free movement and vigorous activity and this is just one of the coats that Ridgeline manufacture. There are also the Westcoaster and the Fjordlander which look like some of the best coats I have ever seen, and I hope to get my hands on them later this year when the weather turns to see if they perform as well as they look.