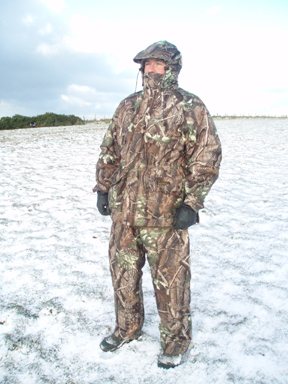 Canada is not a country I know much about, other than it was the home of the Hudson Bay trading company that made vast sums of money wiping out the poor old beaver, but one exceptionally good thing to come from Canada is the Sports Chief Aquatex hunting suit in Advantage Timber camouflage pattern.

This is by no means a run of the mill suit.It is the very top of the tree, and so I decided to give it a extra long test - over 600 hundred hours in fact, right through the very heart of the Scottish winter when temperatures dropped heavily into the minus scale and stayed there for days on end. The poor old suit had no let up day after day. It was pressed into service being pelted by rain and snow blown at it with savage intent by northerly gales whipping down from the Arctic.

To give you an idea how easily the suit coped, I was at the top of a hill with significant snow under foot and my brother who was wearing the suit turned to me and said “It’s not very cold”. The temperature reading at the time was -4 with a wind that could cut a man in two, and my brother wrapped up like polar bear in the Sports Chief couldn’t even feel it.

On another occasion when he was wearing the suit the rain had been lashing down for a solid 8hrs, I was wearing two waterproof coats at the same time and the rain had penetrated through the both of them, so I was convinced that my brother in just one Aquatex coat would be in a similar position but he unzipped the coat to show me that he was bone dry underneath, amazing.

The hood on the coat is without doubt the best hood I have ever come across; like the hoods you find on emersion suits, it completely envelopes the face and has a large stiff peak to keep the weather well out of the eyes.

One gets the impression that Canadians are big burly men lumber jacks and the like, which is probably why the Sports Chief is a generously cut garment that allows a full range of movement. An awful lot of jackets just don’t allow enough room for the shoulders, which can be a real pest when raising the rifle but the designers of the Sports Chief have identified and dealt superbly with the problem. If you want one of the most functional and reliable hunting suits in the world, that will keep the most appalling weather at bay, then look no further than this hunting suit, leading the way in performance and practicality.