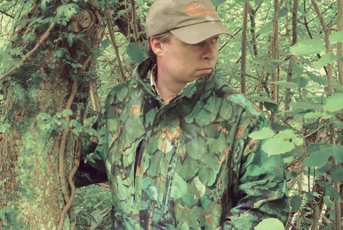 A shooting buddy of mine had been complaining that no one made camo clothing green enough for the English countryside when it is in full leaf. Also dismissing my suggestions that Jack Pyke’s English Woodland, Mossy Oak’s Full Foliage and Danish flecktarn might fit the bill. So imagine my surprise when I saw an advert for Summerflage, from Starlight NV, the night-vision specialists.

It seems Summerflage is unique in having a top and a bottom. This is because it directly imitates the position of plants in a typical hedge: with rowans, hazels, sycamores and rosehips at the top, hawthorn and blackberries in the middle, then docks and wild raspberries, and finally grasses and nettles at the bottom. I loved the concept!

Summerflage clothing is represented by four items: a lined cotton twill jacket, a pair of jeans-cut trousers, a broad-brimmed hat, and a light-weight, un-lined jacket. When I contacted them only the first two were available.

The cut of the garments is designed to preserve the sweep of the pattern as much as possible. So, although the jacket has four spacious pockets at the front, they are internal and have zip closures, instead of the more usual patch pockets with button-down flaps. Similarly, the trousers only offers two front pockets, which is a bit sparse!

Build quality was good, the jacket having Velcro closures on its cuffs and storm flap, a double-ended metal zip, internal drawstrings with toggle fasteners at the waist and hem, and a black cotton lining. There’s no waterproof membrane, but this is primarily a summer suit and you can always treat it with Nikwax Cotton Proof.

A little surprising was the sizing. I have a 40” chest, 34” waist and 30” inseam and usually go for Medium in both jacket and trousers. However, they reckoned I’d need a Large and so it turned out, and even then, despite needing to turn the trouser bottoms up a couple of inches, I could have done with a bit more room in the seat. In fact, I’d like to see a roomier cut to the trousers all round, for the sake of both ventilation and freedom of movement.

A PATTERN TOO FAR

What struck me was how bright the Summerflage fabric is, with intense, super-saturated colours, dominated by a vibrant green. I was expecting something special, as they told me it hadn’t been easy to find a manufacturer who could reproduce on fabric the colours their original photographic research had identified in the hedgerow samples. But I couldn’t help thinking they’d gone too far!

Out in the field, though, Summerflage was clearly in its element! It’s unnatural-seeming brightness blending much more closely than I had expected with the natural vegetation, and creating a very effective contrast with the dark black shadows in the pattern, a significant aspect I had previously overlooked. Thanks to the choice of plant species represented, and the resulting size of the leaves and shadows, Summerflage blends better with mixed hedgerows than with the predominantly hawthorn, blackthorn and bramble brakes on much of my ground, but how would it fare in the woods?

To be honest, this was where it was most at home. Under the canopy, the sheer greenness that was hard to ignore in the yellower light of the fields came into its own, and the pattern really performed, melting into its surroundings, making it a great choice for the hunter.

A LOT TO OFFER

Summerflage clothing isn’t cheap, mostly because the material costs four times as much as DPM to produce, and because Starlight can’t take advantage of the economies of scale enjoyed by the more familiar global brands. But I think it has a lot to offer for UK shooters whose ground is characterised by mixed deciduous vegetation. Personally, I’d like to see the hue nudged a couple of stops towards yellow, as I think this would make it perform better in more open country without spoiling its impressive effectiveness in woodland.

However, I was told the colours are designed to reflect both early and late summer hues, so re-tuning the balance to suit August (when my testing was done), would de-tune it for May. I’ll be interested, too, to see how the colours mellow with prolonged exposure to sunlight, wear and washing. Nevertheless, all credit to Starlight NV, not just for coming out with an innovative and effective new pattern, but also for making one we can really feel at home in!