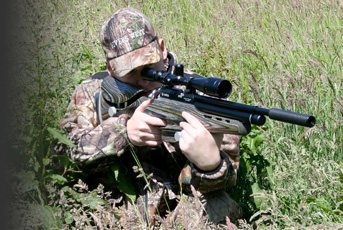 Camo tests normally take two forms, one is we all rave or rant over a new pattern often on existing clothing, the other ‘forget the camo - check out the build’. Truth is the latter is far more important as it can look as pretty as it likes and blend in all day, but if you can’t stay out in it all day then it’s not a lot of use. The generic label here is ‘technical clothing’ and a new name to me is Rivers West from the USA.

What I have here is the Ambush jacket and Trail trousers, which must be considered as clothing for bad weather, as is water/wind proof and amazingly tough. This last property generated the company, as President and founder Mike McGinley has been an outerwear manufacture for 20 years. An avid hunter he was out with his new Gore-Tex jacket, which snagged on a broken tree limb and tore an L- shaped hole in the sleeve (been there, done that, and how annoying is it?). He was not amused and three years and $2,000,000 dollars of development later the H2P waterproof system was born.

Rivers West guarantees and endorses their products with a waterproof and snag resistant fabric guarantee to keep you warm and dry. Which it certainly does and I have to say the impression of commitment you get from them is good.

The material used is called RW and treated with a product called DWR and has an encased membrane so that it is protected by the outside fabric. The inside has wicking properties to draw moisture away from the body. The RW fabric was designed to reflect the natural body heat, so keeping the hunter warmer with fewer layers. Well that’s the tech stuff but to me the outer feels like a thin version of the old saddlecloth, though is far lighter and sheds water easily with no fluid/weight build-up and retention in the pile.

It is also very tough and I don’t say that lightly. Richard Lee of Rivers West Europe Ltd told me that it’s barbed wire proof so I decided to go one better and try and push a meat skewer through it with little success. My first outing with the suit was the perfect day not to go hunting; up in an exposed high seat with an easterly wind coming in along with heavy on and off rain. More out of stupidity and stubbornness I sat there for nearly three hours on a soaking wet plank and back rest, yet not one drop of water got through. Likewise with the hood cinched down tight and the bum flap (beaver tail) at the rear of the jacket the wind didn’t get in either. All this in a light and easy moving garment, so let’s see what you get!

I got the Ambush jacket and Trail trousers along with a baseball cap, beanie hat and what they call the radial, which is a like a baseball cap but with a long and wide neck flap. OK it’s odd looking, but if you don’t want to be using a hood it’s the next best thing. They also threw in a pair of Rivers West anti-blister socks and thermals.

The jacket is generously cut and shows the aforementioned beaver tail build at the rear, which keeps out the wind and also directs water away from that area. Stowage consists of two large, bellows pockets at the front with magnetic flap, which is a great feature as they stay shut until required. Behind these are two, massive, zip-closed pass-through slots and inside are big open pockets. Closure is by a medium zip with a waterproof strip behind, unusually there’s no over storm flap or studs/buttons to back this area up.

The radial collar offers a high, stand up build so when raised keeps the elements out - it can be folded down too. The semi-peaked hood is of the same build as the jacket, which is good and attaches by studs at the back. There’s a press stud neck closure at the front with a draw cord and it’s big enough to easily cover the head and still give good movement. The arms are long with deep, elasticated cuffs and feature under arm zips to allow you to vent excess heat. On the hem is a drawcord to keep things tight down below. The shoulders feature anti-slip panels for a rifle sling.

The trousers use the same, full material build as the jacket, which is an area which some manufactures skimp on, but not here. They also have what Rivers West calls a Diamond Flex crotch which means that when you bend over or climb over a gate/fence, the crotch area moves rather than being static. There are five pockets; two big two cargos on the leg with magnetic flap and three zip-closed types - two on the side and one rear right. The fly is zipped with a press stud at the top and the waist is elasticated with belt loops and buttons for braces. At the ankles are 12” waterproof zippers to allow easy access over boots.

The general feel is good and the material reasonably quiet in movement and not a drop of Velcro in sight. If I have one niggle it goes to the lack of breast pockets; stowage is generous but it’s all down on the waist, which is not so good for access when prone. However, I can live with that as what the Ambush jacket and Trail pants offer is very good indeed. There waterproof ability is amazing so laying down in the wet waiting for your quarry is not an issue, nor being caught out in the open in a downpour or gale.

My own camo wardrobe consists of two items – Deerhunter Montana and Browning Grande Passage suits, both of which I rate, adding to this now is the Rivers West Ambush and Trail set. Colour and pattern wise you have the choice of Realtree AP and MAX 4 plus plain green. The Rivers West collection will be available in August at all good gun shops with a ladies fit collection coming out in September. They will also be at the Midland Game Fair so go and have a look and if you’re in the need of some decent technical gear you could be impressed.

For: Tough and practical water and windproof clothing
Against: Not a lot
Verdict: Well priced and efficient and well worth a look