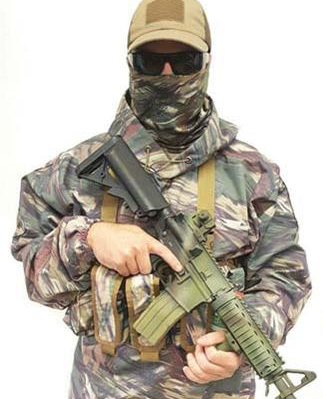 241 Tactical have never shied away from working with cutting-edge and unique camouflage patterns, as well as with classic patterns like ERDL and Desert Tiger Stripe, which have been proven to work effectively; this is an ongoing process. I’m always keen to get under the skin of a story, so when Sean advised me that they would be working with a totally new camouflage pattern, you can bet your bottom dollar that I was interested to hear all about it!

0241 Tactical started off making small yet much needed items (Neck Gaiters, Goggle Covers, etc.) but soon expanded into Tarpaulins (Basha Shelters) and clothing. Given that it’s very difficult to mass produce uniforms in the United States, they pushed as much as they could with their Tactical Operator’s Pullovers (TOPs) and Tactical Over Trousers (TOTs) which are absolutely cracking designs and show Sean’s own intimate knowledge of ‘good gear to go’ all too well. They’ve also formed alliances with other US manufacturers, such as HeadOnTactical, to provide gear in the same patterns their clothing and accessories are made in, to give the customer more of what they are looking for in one place.

However, even I was a little staggered when Sean told me about the new pattern he was working with, and when asked, he told me: “DEPSOC360 Camouflage has quickly become my favourite pattern. I first saw DEPSOC at Shot Show 2013 and was at first taken back thinking what is this pattern? Real-Tree? Tiger Stripe? Both? It wasn’t; it was so much more. It’s a more complex and more effective pattern given the pattern’s three-dimensional look. The more I looked at DEPSOC, the more I saw its effectiveness.“

As luck would have it, in 2015, Sean met the owner and began working with him to energise the DEPSOC brand for the tactical and military markets. DEPSOC 360 has seen use within the commercial hunting market in the USA but the pattern was developed for the military and that is what Sean is primarily focusing on at the moment. Military snipers need a pattern to break up the human silhouette at longer distances far better than typical military patterns.

DEPSOC 360 clothing has been available but was designed with purely hunters in mind. The clothing was not Mil-Spec in construction or design, so 0241 Tactical developed a line of gear that meets the military/tactical specifications. DEPSOC is available in a variety of patterns for different environments, creating an All-Terrain Camouflage (ATC), Desert, and an Arctic pattern with military users in mind, but still applicable in the civilian marketplace. DEPSOC camouflage patterns are feasible for military, as well as civilian applications, as they offer worldwide use versus a specialised solution to one geographic location.

Sean now has DEPSOC 360All- Terrain Camo production in ACU-style uniforms (as well as combat shirts) with another 0241Tactical partner.

These should be ready commercially soon, but certainly before Shot Show 2018.

Additionally, 0241Tactical developed its own suit (tops and bottoms) in DEPSOC 360 as well as boots, caps, balaclavas, and various other tactical gear. This means they can outfit a customer from head to toe in DEPSOC Camouflage right now. I’m excited to see DEPSOC progress as it is gaining more and more traction with all types of user, both civilian and professional. DEPSOC owns its own textile printing operation, which allows 0241Tactical to service military, law enforcement, and civilian personnel with individual or large orders; this beats the traditional business model of introducing a new pattern and hoping it gets picked up by enough manufacturers to make all of the different components needed for a complete kit. 0241Tactical working with DEPSOC, can provide a onestop shop for a complete DEPSOC kit.