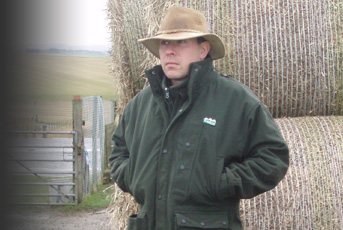 I do not have to tell you that the weather up here in Scotland can be appalling as regards rainfall and whilst this can prove devastating for some, I was able to make use of these conditions to put a suit of weather proof clothing through what has to be one of the toughest wet weather tests ever.

At certain times of year the sheer quantity of the rain hammering from the skies in vertical sheets thanks to the strong winds can rip across this part of the country. Such rain is very invasive and the slightest weakness in a garments construction will very rapidly be exposed, but the ‘Roar’ suit of clothing that I was testing hails from that great land of hunters, New Zealand… also known for a drop of the wet stuff.

The Roar suit comprises of a three quarter length jacket and a pair of trousers. During the test they did not let in a single droplet of the hammering rain, in fact the Roar performed so well that I now rate it the most waterproof coat that I have ever worn.

I could tell you that the coat and trousers have a 3 layered shell using RL-Tex with abrasion resistant sealed seams, but it is much more informative to tell you that no matter how hard it rains you wll stay dry in this coat and trousers – in fact as dry as the proverbial bone. The hood on the coat is quiet simply magnificent as it completely envelopes the head and a gale can not blow it of and this is no ideal boast - I have been out in 70mph winds over the last few months. This suit is claimed to be windproof and the claim is true enough, but I would not describe the coat as warm; it keeps out the wind and the rain better than any other coat I have so far tested but in seriously cold conditions (by that I mean –5 degrees and below) you need some decent layering of fleece beneath the jacket. Highland Outdoors - distributor of the Roar suit - also sell some very effective fleece garments that can be used to build up some warm layers beneath the Roar coat.

This suit is not only incredibly waterproof it is also seriously tough, I even wear it to go ferreting which is an activity that literally destroys clothing, which is why I generally only wear cheap army surplus for ferreting. But the other day I was crawling about on my belly in the Roar suit under a huge patch of undergrowth including brambles and nettles, netting up a warren. When I emerged from under there the suit was still in one piece which seriously impressed me and the nettles and brambles did not come through the trousers or the coat. I know wear the Roar suit on all my ferreting expeditions.

The Roar suit comes in either the Buffalo camouflage pattern - which I demonstrated in the December 09 issue of GunMart – or in a deep green colour. The Buffalo camo works superbly well in the UK environment, while the Roar suit in deep green is even smart enough to wear in town as a top coat - and it will keep you 100% dry. This highly impressive wet weather gear is available from all Highland Outdoors stockists.