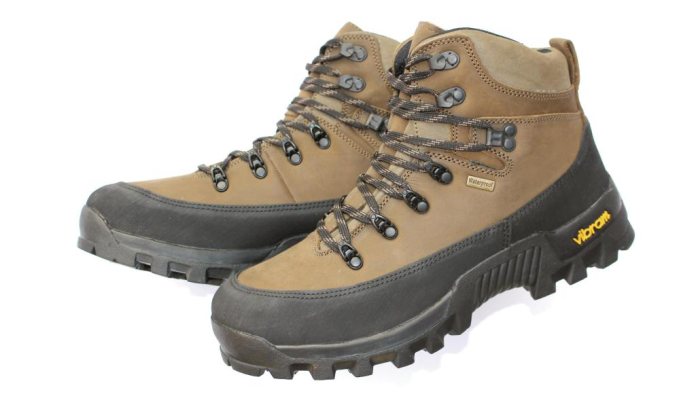 Jack Pyke of England has built up a well-rounded roster of outdoor footwear, from Wellingtons to high leg hunting boots. While the selection has grown (and greatly changed), over the years, there’s a model that is one of the first they offered that’s still showing no sign of losing punter popularity or favour! I have tested these before but feel that they deserve an airing every now and again, as we shall see quality, ability and sheer value for money, makes them top choice for anyone looking for some decent daisy roots.

Measuring 7½” at the front and dropping to 6” at the rear, where they easily flex, yet are still high enough to give full protection at the ankle area the Fieldman Boots fall into what are classed as the ‘mid height’ category. Manufactured from full grain leather, with ‘Agion’ anti-bacterial protection plus a Hydroguard Membrane (ensuring they’re 100% waterproof and breathable) they also boast 200 grams of Thinsulate insulation. Although the rugged build of the footwear is clear to see, they’re also extremely comfortable, aided by the tongue and padded heel support.

The robust outer build transfers down to the very thick and deep cut, Vibram Trek Hunter Rubber outsole, which is also fitted with a very generous full wrap around tough rubber rand. The latter feature is particularly noteworthy, as you’d be hard pressed to find one as distinctive and well configured on any comparably priced boot. Such is the design that it offers a very high level of all-round protection running as it does fully around the front toe section also creating a robust toe buffer, to where it eventually rises up at the back to strengthen and protect the heel area.

The aggressive cleat and lug layout of the heavy-duty outsole is a well thought out design, having both thick deep lugs combined with what can best be described as ‘rough-cut’ jagged edge clover leaf shaped lugs on the inner sections of the sole. All are well appointed and offer a good compromise for grip on a wide variety of terrains and surfaces and are sensibly spaced apart for ease of cleaning. The contour of the underside is also curved, so that it gives every footfall a natural roll as you walk.

The well-padded tongue has a wide throat for ease of putting on and off while the lacing system comprises of 4-pairs of captive articulating D-rings that stop at the lower part of the ankle where your foot arches as you move. A pair of open metal hasp fasteners are set back from the others, so the boot can be drawn securely to the foot and then two more pairs of open hasp retainers take you up to the top.

Upon slipping your feet into these exceptionally comfortable boots, it’s immediately apparent that all aspects of their build haven’t been scrimped on affording them a rugged, tough and dependable appeal. All seams are double stitched and, for such a rugged boot, the Jack Pyke Fieldman are very comfortable to wear and suit stealthily stalking of twitchy quarry, as they are for trudging over muddy fields or negotiating tricky inclines and/or descents.