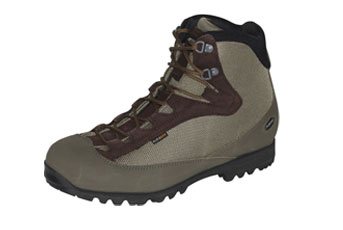 With a proven track record ‘on the march’ - and more than 2,000 pairs sold to military and Special Forces users - a two-year development programme sees Trekitt Hereford launch their AKU Pilgrim GTX boots to the field sports and airsoft market.

The AKU Pilgrim GTX Boots have been developed from the acclaimed AKU NS564 ‘Navy Seal’ model originally supplied to US Special Forces (see elsewhere in this issue).
The new boots were then thoroughly tested by Trekitt of Hereford’s own elite team over some of the most demanding training conditions in the UK.

AKU Pilgrim GTX features a full Gore-Tex lining, and a robust Vibram® sole with EVA cushioning to reduce fatigue. The success of the Pilgrim in military applications is credited to the excellent fit characteristics and comfort in use over long periods of wear, particularly when compared to other boots in the military market.

Lightweight, yet strong and supportive, they have been shown to reduce fatigue in the most demanding conditions. The AKU Air8000™ construction system also gives exceptional breathability for a waterproof boot; this reduces the build-up of sweat and the associated discomfort that comes with it. These all weather AKU Pilgrim GTX Boots are available in MTP Forest or Black and are priced at £169. (NOTE: For extreme dry climates and desert conditions, the AKU Pilgrim DS Boots are also available).

Every pair of AKU Pilgrim GTX Boots is made in Europe at AKU’s own manufacturing facilities, with each boot being hand finished and built to last from the highest quality materials available.

For further information visit or to buy direct contact Trekitt on 01432 263335 or visit http://www.trekitt.co.uk/