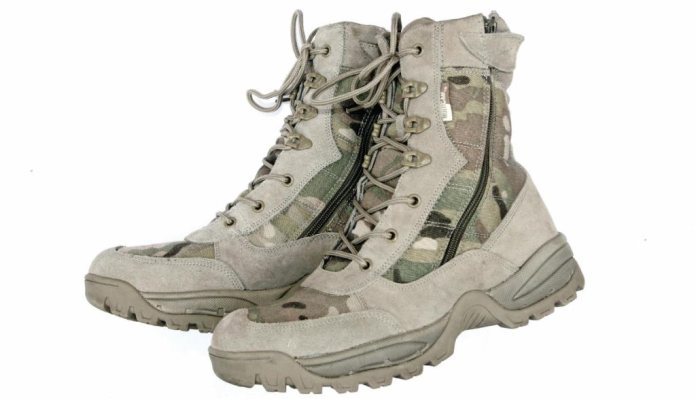 When these boots where added to the Viper footwear roster almost five-years ago, they were immediately well received by the Airsoft ‘skirmishing’ community and paintballers who also use this type of kit. However, hunters can be staid in their ways and this ‘new’ look hybrid boot, with zips up the sides, did look a tad radical and not what the UK hunter was used to. The reason I mention this is because in my opinion they’re a muchoverlooked boot and one that are worthy of any airgun hunter’s consideration. Read on…

Measuring 8-inches high, the boots immediately impress due to their forgiving nature and lightness. The shoe architecture is also a very interesting one, as it’s what you’d termed a ‘hybrid’ build, due to the outer being manufactured from 1000D Multicam Cordura, while in key areas is heavily complemented by a soft but tough suede leather. This has been used to give extra support and protection at the toe, lower side, heel, along and up the front section holding the lacing system and at the rear. Here, the material extends up from the heel support to the padded collar. Along the way they’ve made accommodation for a flex panel and directly above this are three horizontal strengthening ribs. At this section, these ribs are also internally padded to give extra comfort and support.

They feature a well-padded tongue and the lacing system is a mix of coated metal eyelets and captive retainers above. This layout allows the boot to be drawn very snugly to the foot, ankle and lower leg – exactly how a ‘tactical’ style boot needs to be for stealth and assured footing. However, this unique boot features two very strong YKK Nylon zips on either side, which are slightly curved as they extend from the lower suede side panels to the very top where a large Velcro fasten securing tab ‘bridges’ across the zip for extra security. There’s also a fabric and plastic baffle behind the zip to keep out dirt, mud and the like. These aren’t a gimmick but very handy for quick removal and getting into.

The way to use these zips, is when you’ve conventionally fastened the boot to suit your foot/ankle/lower leg shape, then you can leave the lacing tension set and the zips allow you to effortlessly slip in and out of them.

The tough EVA rubber sole is the company’s own design and the lugs are largely configured as broad section bars, separate from each other but they do follow a similar path as they cross under the sole from one side to the other. Under the slight toe rise there’s a set of lugs specifically configured to help dig into soft ground should you be ascending a slippery or muddy slope. This ‘broad tread’ design gives you a good level of self-cleaning, as it doesn’t pick up mud. There’s also a short run of ‘rappelling bars’ (side lugs), which combined with the heel and toe riser (which have a deeper amount of EVA) should help protect and further extend the life of the well-made outersole.

During my time using them, I’ve no hesitation in saying that these are amongst, if not the most, flexible and quiet boots I’ve ever experienced. The build quality is excellent, they’re tough yet light, very comfortable to wear. This makes them the ideal stalking boot and one that benefits from its ‘cosmetic appearance.’ Talking of which, that nicely leads me to mention that as Multicam (designed by Crye Industries) is a non-terrain specific camo, then they’re ideal for those (myself included) who feel ‘photo-realistic’ patterns aren’t always the best option. They come with a set of washable and breathable odour free insoles, which also have useful, well-positioned impact pads.