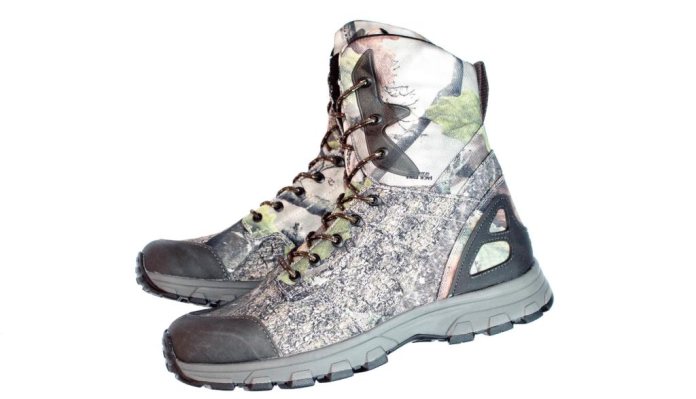 At present, it seems that Evolution is the key word at Jack Pyke, as they’ve not only ‘covered’ their most popular hunting wear in what is their latest camo design, but they’ve now just launched a 2nd Generation version of their very robust original Tundra Boots These new boots are given the ‘2’ numerical denotation due to them having an advanced design over the one used by the original footwear and, of course, due to them being fully adorned in their latest English Oak Evolution camo. Incidentally, as the original Tundras are still available, in my book that’s proof positive that the company realise that English Oak is still a relevant and useful camo design, even though it’s season and terrain specific.

Measuring 10-inches at the front and dropping to 8-inches at the rear means that they firmly fall into what are generally called high leg boots; even so, they still offer flexibility plus allow for a high level of unhindered movement.

They’re manufactured from 900D Cordura with a Hydroguard Membrane, plus a mesh lining at the top. The former makes the boot tough, while the membrane and lining ensure they’re waterproof and breathable.

Something that is initially apparent, is just how incredibly light and comfortable to wear they are. This has been achieved by the boots only having added padding at three key areas; these being the well-sized upper, tongue and heel.

They have a tough protector at the toe, but as can be clearly seen at the rear, the extra strengthening applied to the heel has been configured in such a way that it gives more support without adding unnecessary weight.

The combination EVA and rubber sole with contrasting grey colour rubber rand give good protection underfoot and, although having a solid construction, they still feel comfortable underfoot as you move. The interesting and quite unique cleat and lug layout of the outsole gives a very high degree of traction on a variety of terrain. A noteworthy feature is the sole itself extends upwards at the front; this toe rise/buffer even has lugs that give extra grip for ascending slopes.

The well-padded tongue has a wide throat for ease of putting on and off, while the lacing system comprises eight pairs of eyelets. The fact that there are no open hasp lace points doesn’t hinder the ese of which you can get into and out of them, plus the amount and positioning of the eyelets allows you to draw them snuggly to your foot and lower leg.

‘Camo-Cad’ boots might not be to every body’s taste but there’s a no denying that if you do like this style of footwear, as I’ve mentioned in the past, the English Oak Evolution design is a very versatile and general purpose one.