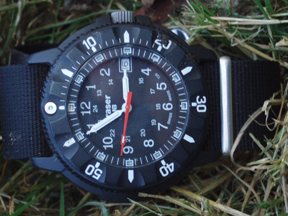 Heinnie Haynes are a company that specialize in providing high quality equipment to the outdoorsman whether that be a soldier on active service or a hunter in the field. Over the last few months I’ve been putting two of their wrist watches to the test exposing them to brutal outdoor conditions for a gruelling 200hrs.

This watch is the standard issue watch for the American army, this also speaks volumes as to its quality as the US forces are the best equipped in the world, selecting the finest equipment that money can buy. Not only is it a general issue watch but special forces such as the SAS also choose it, and for men who’s lives depend on accurate time keeping, only the most reliable equipment is acceptable.

During my tests I have exposed this watch to the shock of sudden impact, dirt, dust, grease, water, cold weather and vibration, and it took it all in its stride, which is quite some achievement. The ‘glass’ is very thick and not only will this absorb the heavy impacts that a soldier or hunter might inflict upon it, but it’s also incredibly resistant to scratching.  During the 200hr test period, when I spent a considerable amount of time underneath my Land Rover carrying out mechanical work it did not incur a single scratch even though it made sharp contact with numerous pieces of metal. This watch is said to be waterproof to a depth of 35m but I did not feel like jumping into the North Sea to find out, it is however total impervious to the most horrendous down pours of Highland rain. One of the most important features for a watch is to be light and comfortable on the wrist and the Code Blue scores an ‘A plus’ in this category being a pleasure to wear. This watch is called the Code Blue because the hour digits and the hands are illuminated in the dark in a deep ice blue glow - a mesmerizing sight that you can stare at for hours.

I have a reputation in my family as a destroyer of watches due to the fact that a watch owned by me is lucky to survive more than a couple of months, but on its present performance I think the Code Blue is likely to last many years.

The next watch that I subjected to 200hrs of sheer hell is the Casio Mudman. This watch has an impact resistant plastic casing with a stainless steel back, the strap being made of rubber, the watch itself having a digital display. As its name suggests the Mudman was designed not just to cope with wet conditions but with the invasive effects of mud.  With over 200hrs of testing in an agricultural environment - where mud and dirt are a daily occurrence covering everything in sight - I have seen it live up to its name, it does not matter how dirty or wet the conditions get the Mudman is totally unaffected.

It can also take the knocks, on my wrist it has collided heavily with a number of very hard surfaces that I felt sure would of killed it outright, but it lived through the experiences and still continues to keep time with pin point accuracy.

This would make an excellent watch for anybody working or hunting in very wer and/or dirty conditions. My mother’s family originates from Southport were a number of wildfowlers have perished on the sands because they were cut off by the tides. With a watch like the Mudman that functions flawlessly in such environments the wildfowler can use the alarm function to alert himself when it is time to leave for home. In fact for anyone whose passion involves water or mud, such as canoeists or mountain bikers this is the perfect watch. The Mudman also possesses a number of other useful functions, such as several stop watches, a calendar, an alarm and a light that very effectively illuminates the Mudman’s face at night. The Mudman is a big robust piece of kit put it is not too heavy, and it feels nice and comfortable upon the wrist. Most watches, when faced with seriously muddy conditions, will just not be able to cope, but the Mudman can actually be buried in mud and will still keep working making it a seriously robust piece of kit.

If these two watches are representative of the Heinnie Haynes range of products, then this company truly does offer some reliable and robust outdoors equipment.