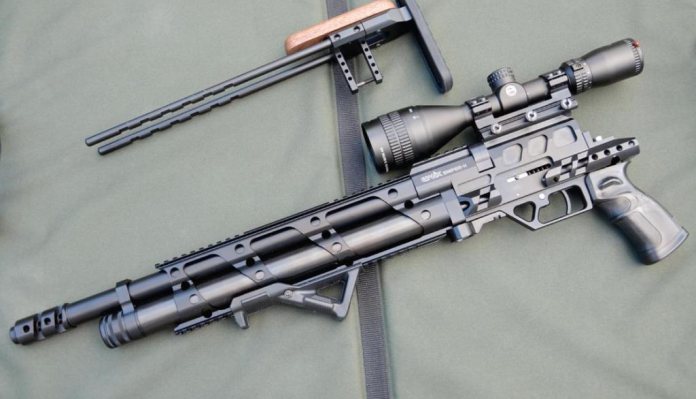 We often talk of products ‘dividing opinion’, but one of the most divisive brands of all is surely Evanix. With strong and seemingly overtly militaristic designs their stock in trade, this particular stable has seen steady growth in recent years, as demand for all things ‘tactical’ continues unabated. Yet, it’s fair to say that whatever you may think of their product line-up, bland they are not, and it’s obvious their styling won’t appeal to all!

A host of new models have been unleashed (I think that’s the word!) on the UK market just lately, and the Sniper-K, on test here, is (believe it or not), one of the more conservative designs! Evanix are made in Korea, and having hardly handled their merchandise before this test, I had limited real experience of their wares. Now, having spent time with the Sniper-K, I have an informed opinion, and to be honest I’ve surprised myself. Time then, to get up close and personal, for a full and objective evaluation.

Pick up this Sniper-K, and it hits you just how rugged and robust is the overall design. Chunky, over-sized, over engineered parts set the tone, and the overall impression is of a near bomb-proof construction, and a product built to take some serious use. It also feels heavier than you would expect, since that skeleton stock deceives the eye; yet at 7.6lbs without a scope, it’ still only in the medium weight bracket.

Specification wise, the Sniper-K is a multi-shot PCP, with a 10-shot rotary, cassette-style magazine, and an adjustable three part tactical stock. Side-lever cocking, a shrouded barrel, and 2-stage trigger also feature, but with much more besides on the spec sheet, we’d better get started!

OK; admittedly there’s very little wood on show, but with most prospective purchasers of this model probably fully paid up members of the tactical appreciation society, that small detail should prove an irrelevance. For what we do have here is impressively slick design, catering for fans of the more utilitarian, military way of doing things.

Effectively the stock is a three part ambidextrous affair, with the forend taking the form of a synthetic moulded hand stop identical to Magpul’s AFG (angled fore grip) for Picatinny rails, which is not only nicely shaped, but also adjustable. Slacken off the cross bolt, and re-position it along the rail to a position that suits, then re-tighten the bolt.

The pistol grip is a separate plastic moulding, and here lies one of my few criticisms, since, whilst the shape is pretty comfortable, the plastic itself (unlike the hand stop) has a cheap feel to it.

The minimalistic butt is length-adjustable and also removable and runs on two, slotted rods; the design sees an adequately grippy rubber back plate form the pad into the shoulder, whilst a small section of wood sits atop a small plate to form the cheek piece.

Again, at the tweak of a couple of screws, this component can be raised and lowered to suit. However, the pièce de résistance is the fact that the entire butt section assembly can be removed in an instant or adjusted for LOP, simply by pressing the large silver spring loaded button, just to the rear of the action block. It’s a neat design overall, but a small gripe here has to highlight the fact that the stock rattles slightly within its housing. The addition of two small rubber studs or such like, would remedy the problem at a stroke. With that butt adjustment though, it does mean that ‘length of pull’ (LOP) can be adjusted to suit the individual.

‘Over-engineered’ sums up this rifle nicely, and the chunky, super tough chassis, that wraps around the cylinder and barrel shroud is a case in point. All the breech block and main chassis are finished in matt black, whilst the cylinder sports attractive chemical bluing. Full length Picatinny rails run along the bottom and top edges of the forend, along with two further runs either side of the magazine housing. In other words, opt to fit all manner of scope, laser, night vision, bipod or other attachments, and this Sniper-K has all bases pretty well covered.

Getting air into this Evanix is a simple affair, courtesy of the filler probe adaptor provided. Just twist the valve cover at the muzzle end of the main cylinder to expose the inlet valve. Insert the probe (with air line attached and fill to a maximum of 200bar. Bleed the line, remove the probe, and twist the valve cover closed- job done! Evanix fit a pressure gauge to this model too, which is always reassuring, and being situated just forward of the trigger guard, it’s somewhat safer than those fitted to the end of the cylinder!

As mentioned, this model utilizes a 10-shot rotary, cassette-style magazine, and whilst the loading procedure is a bit fiddly, with experience and familiarity, in operation, it all works rather well. To fill the mag, first rotate the inner drum anti-clockwise until the thick band of the drum appears on the right hand side. Pellets can then be dropped into each chamber in sequence, as the drum is rotated anti clockwise, with each chamber held to the right of the aperture, to stop pellets falling all the way through. Once the magazine is full, just slide it back into the slot in the breech block until you hear a small click, push the side lever closed to chamber the first pellet, and everything is ready.

Over the course of my test, operating the silky side lever to index the next shot, worked absolutely faultlessly, leaving me to conclude that this Evanix design is up there with the most reliable magazine systems on the market. The Sniper-K certainly surprises in the handling stakes, with that front synthetic adjustable hand stop feeling quite positive in the aim. In fact, with the shape and possible adjustment, versatility is a given in the aim. OK; I would prefer more in the way of forend, but given this model’s remit, the specified configuration works well.

Press the button to extend the rear stock section, and the whole assembly can then be snapped into a position to give the right LOP to suit. On test, with the stock adjusted and feeling about right, one final check remained, before I could concentrate on any evaluation down range- the trigger. The metal blade is nicely shaped, being quite broad, and pleasant in use, although firing some test shots revealed the final release a little stiff.

A quick glance at the user manual soon encouraged me to grab my Allen keys, and a quick tweak clockwise, of the small screw just forward of the blade, soon had the release breaking predictably and fairly lightly. As for muzzle report, there’s a distinctive snap from that rather snazzy uniquely ported diffuser.

Shot count figures specified by the UK importers suggest around 150 in .177, and 170 in .22. My model on test was .177, and from the prescribed 200 bar fill, I recorded 135-shots, using Air Arms Diabolo Field pellets, and an overall spread of around 30 fps. The Sniper-K has an unregulated action, so don’t forget to limit your shot count, and experiment with slightly lower fill pressures as consistency can most likely be tightened even more.

Accuracy really impressed with this rifle, and over my 35yard range, I easily managed regular groups just a little over ¼” centre-tocentre using Air Arms Diabolo Field pellets, which obviously takes some beating.

Well, I’ll be honest and admit that, as someone fairly obsessed with outdoor competition shooting, I simply wasn’t expecting to be quite so impressed with this model. Overt military styling can occasionally mean compromise in the performance stakes; but this Sniper-K didn’t just give a good account of itself, it well and truly won me over; for its sheer quality of execution, and quite excellent down range performance.

The test gun was supplied by AC Guns (www.acguns.co.uk) but since the article was written they told us they no longer import/distribute Evanix products. We imagine that Evanix are now looking for a new UK importer, so as they say watch this space!’