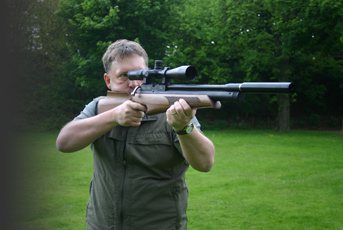 I first met Steve Wilkins, the owner of Ripley rifles back in 1990. He made me a steel cylindered AR4 FT rifle, one rifle of the first batch of four “REAL” FT rifles Steve had ever made, with input from me, Andy Calpin and Tom Walton. Up until then he was only known for his aluminium cylindered precharged pneumatic hunting rifles which had reached the AR3 stage. The new AR4 FT version had a quick fill system and slotted muzzle brake, both totally new features from Steve. Another massive departure for Steve at the time was that he had to build a dipping tank and learn how to blue steel.

I met Jim Hogan of Hogun Rifles for the first time in 1998 when he asked me to look at his own design of rifle - the Logun MKI. It started a long standing relationship with me having the first sight and some input into most of Jim’s rifles developments. This was years before Hogun was bought and as became part of AGS/Webley with Logun rifles.

Both these men are true giants in the airgun world and to have them work together must be a dream ticket as far as air rifles go. With Jim in sole charge of Hogun Firearms, the quality of products is assured; make no mistake Hogun is not Logun, in fact Jim has nothing to do with Logun now.

Jim took me into his confidence a few years ago with the design and concept of the new Hogun/Ripley joint venture. Steve at Ripley has orders for his own bespoke airguns from all over the world and a mass production rifle is not really the Ripley way. Jim knows production and saw the potential in them working together to produce an air rifle in sufficient quantities to fulfil demand at a price which was still affordable for such a high quality product.

Highland Outdoors, who Hogun Firearms make the Ripley Elite for, sent me a Ripley Elite (Karbine) rifle to test, topped with a Nikko Stirling scope. At first glance the rifle looks all Ripley from the distinctive breech block and trigger mechanism right down the large bolt knob on the cocking handle. Only when you delve into the detailed design do you see Jim’s take on producing a rifle on a bigger scale than Steve is capable of in his workshop.

Working closely with Steve on all aspects of the rifle’s design, Jim’s take on a Ripley is with ease of production in mind. Steve is very happy with what Jim has come up with. That’s not to say ease of production means less quality or ‘cheap and cheerful’, this rifle certainly is not that, and on actually getting my hands on one for a test it is very, very clear that this is a cut above the average PCP rifle out there at the moment.

Jim worked on the trigger design, which is based upon the Ripley but with a few improvements. There have been other improvements over the original Ripley, like the air filling system, which is now very Logun like, using a bayonet and socket system with a knurled dust cover/collar that rotates to hide the hole under the front barrel support. All very neat and simple.

The barrel of the Elite is carried in a shroud as are Steve’s Ripley rifles, but the ½ inch UNF thread for the moderator is not part of the barrel support as on the original Ripley. This is a steel section affixed precisely to the end of the top quality Walther barrel blank. Another twist to the barrel of the Elite (apart from the rifling!) is that the pellet loading channel is machined from the barrel itself, which means the pellet does not have to jump any joins from channel to barrel, the pellet is already “in” the barrel as it were. This is a major advance in airgun design and typical of Jim’s genius. This smooth transition causes no damage to the pellet what so ever, unlike some other systems – and it’s a lot more cost effective.

I own two Ripleys at the moment, and I’ve owned another four of this prestigious make since 1990, so I know a thing or two about the Ripper. I was also in at the ground floor of Steve Wilson’s entry into the FT world, winning many titles with the Ripleys and shooting for the Ripley team. So I was struck by how right this Ripley Elite felt as soon as I got my hands on it.

Starting with the iconic shape to the breech block; the 160mm long block is all Ripley AR5S, with 72mm of dovetail at the back and 50mm at the front, the trade mark angled cut out for the barrel/pellet channel is not only ultra functional it looks right too. The model I had for test was finished in satin black which set off the bright ½ UNF threaded section at the end of the rifle, this comes with a thread protecting collar with a knurled surface. Unscrew this and a moderator can be fitted. A Hogun Decimeater model was supplied which I duly screwed on. The test Elite was the Karbine version and so even with the moderator on it only took the overall length to 1055mm (41 ½ inches). As Highland distributes the Nikko Stirling brand of scopes one of these was already bolted onto the rifle. It was a 4-16x 44mm Targetmaster, with a Mil-Dot reticle, which was very nice too. It was mounted too high on the rifle really (the mounts were for a 56mm front end not a 44mm) but that was my only niggle with the gun’s set up, but the height of the scope proved to have an effect on the range testing later.

My attention then turned to the stock. This was a Custom Stocks of Sheffield product, in keeping with the whole British made theme of the gun. I really rate their work and always have done. The test rifle was fitted with the premier thumbhole walnut stock currently available for the Elite. This has a very aesthetic shape with a sweeping cheek piece and subtle schnabel tip to the forend. The underside of the stock extends over the front of the trigger guard to partially obscure it, mirroring the curved lines of the aluminium trigger blade that matches the rear of the trigger guard. The pistol grip has the aforementioned thumbhole but also allows the classic thumb up trigger hand position for those fans of that particular style. There is a ventilated rubber butt pad at the rear. Four panels of skipline chequering cover the sides of the pistol grip and either side of the stock’s forend to give a firm hold. My only criticism is the height of the cheek piece which for a dedicated PCP rifle seems a bit low, but that might have been the too high scope mounts fooling me.

After the first impressions it was time so see if Jim idea for a simple unregulated PCP would work. Ripley’s built by Steve have his air regulator fitted, which as the name suggests regulates each blast of air for each shot to achieve consistent power levels and therefore increased accuracy throughout the charge. That and the fact that each one is hand crafted is why Steve’s Ripley Rifles cost twice as much as the Elite.

Without an expensive regulator, is it possible to manufacture a simple knock open valve to such tolerances that it gives regulator type performance? I know it can be done, I have such a system built by Steve on my hunting .22 calibre AR5S.

Jim spent months developing such a valve and running the Elite over the chronograph it was very clear he had cracked it. I charged the rifles cylinder to 200 bar to give a full test. The rifle gave me over 120 shots before it dipped below 9 foot pounds - this was using 8.4 grain JSB 4.52mm .177 pellets. Putting a 10.5 grain Bisley Magnum through the Elite took it up to 11.8 foot pounds, and as these are the pellets that the police could test with, we all have to live with the power we have within the legal limit. The sweet spot from a 185-190 bar charge gave me 80 good shots within 23fps spread at 10.5ft/lbs with the light JSB’s. None of those shots varied from each other more than 5 feet per second. For an unregulated gun that is fantastic, and the absence of a regulator also means there is less to go wrong with the rifle. The only snag is that unregulated valves can be noisier than regulated PCP’s giving a distinctive louder muzzle signature. That is where I class this rifle as a triumph in airgun design, as the valving is so efficient that there is little or no wasted air and the gun is super quiet. Fitted with the Decimeater moderator it is the quietist rifle I have ever tested or indeed ever shot. I wrote a note to remind myself to take my electronic sound meter to the range to see just how good it was later.

After the chrono tests I looked at the trigger. As mentioned before it is based upon the unit Steve designed many years ago but with some tweaks by Jim. I must say, as a long time Ripley owner, that the improvement can be felt, it tested in at 200 grams or 7.1oz on my trigger scales but felt much, much lighter.

Onto range testing and the rifle really shone. It feels like a quality product and shoots like one too. I did struggle a bit at first with the height of the scope which took my cheek nowhere near the cheek piece. Once I mastered a stable hold in the classic FT sitting position I was able to shoot a 6.1mm five shot centre to centre group at 35 yards with 4.52mm JSB pellets.

For the hunter the rifle can be carried about all day with no hassle at all. All my tests were done with the Decimeater fitted as the ultra short rifle benefits from a moderator to improve the balance of the gun. I also tested without the moderator fitted and it didn’t affect the pellets impact point at all. I did run the gun over the sound meter too and facts are facts, it is the quietest PCP rifle I have ever tested, only a Steyr LG-110 fitted with a Logun moderator comes anywhere near the Elite.

Is the gun worthy of the Ripley name, well yes, in spades, so much so that I’ve decided I really need one in my gun cabinet, and in these harsh times the price for such a mechanical marvel is real value for money. I believe it is destined to become a classic British air rifle.