On Target For Charity 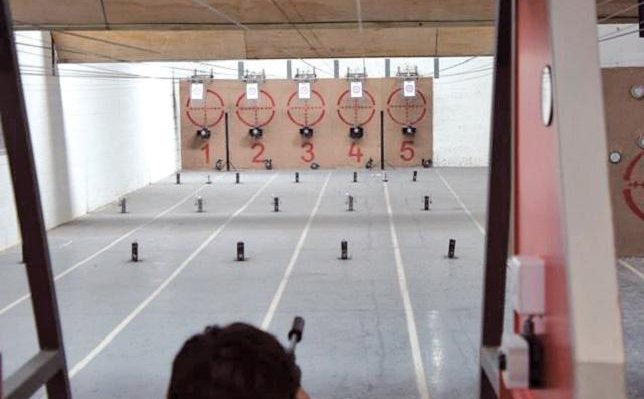 During the summer, OnTarget Shooting Range in Northampton held their first ever biathlon fundraiser in aid of their sponsored charity ‘The Air Ambulance Service Northamptonshire’. The idea was to create a sporting event unlike any other, where both novice and seasoned shooters could compete on an even playing field.

The plan was to have five contestants of different experience, capability and athletic ability race against one another on indoor cycle machines, then attempt to shoot while short of breath, fatigued and still against the clock.

The race would take place over three laps; each lap, the competitors were to cycle two-miles, while each being timed individually, then sprint through to our shooting lanes, where participants would load their rifles and take 16 shots from the elbow at a target just 30mm across in diameter. Each missed shot would result in a 20-second time penalty being added to their overall finish time.

By pitting the contestants against one another in a test of athleticism and shooting ability, we were able to have a very varied array of competitors and varied they were. Competing on the day were; Joseph Rudd, 23-year-old Marketing Manager; a regular cyclist but novice shooter. Becki Young, 19-year-old Personal Trainer; fit as a fiddle but had never shot before the announcement of the biathlon. Bradley Lambert, 22-yearold Operations Manager at OnTarget; not a cyclist but a very experienced shooter.

Lewis bird, 17-year-old Sales assistant at OnTarget; not a cyclist, although he had around six-months regular shooting experience. Drew Winslow, 49-year-old IT Manager; a regular cyclist and experienced shooter but one of the eldest contestants by far.

The morning of the biathlon came around on July 28th, the lanes of the range had temporarily been closed to the public, five indoor bicycles sat at the entrance of the store and a growing audience began to gather in anticipation for the event. Representatives from the Air Ambulance Service arrived to help out as the store’s owner Gordon Gaze announced a 5-minute warning till race time and contestants took on fluids and made final preparations.

11am: Each competitor stood poised next to their cycle, the room fell quiet as spectators awaited, tension built… then GO! All 5 competitors mounted their bike and begun to frantically sprint their first 2 miles, as they attempted to gauge the cycling capability of their opponents.

Quickly, Joseph and Bradley separated themselves as the faster cyclists of the pack and Joseph was the first to leap off his bike, run through to the range and begin shooting. Bradley followed closely behind then Drew, Bekki and Lewis as the aspects of the race quickly turned from a sprint to test of shooting skill and physical recovery.

Lap two quickly begun and followed a very similar routine to the first, with Joseph and Bradley leading the pace then Drew, Bekki and Lewis slightly behind. Then the dreaded first round of shooting scores was displayed. Bradley led the way, dropping only 8 shots of his first 16, Drew and Becki were in a close tied second, dropping 10 shots, Lewis in 4th, dropping 13 Shots and Joseph in last place for shooting, dropping a massive 15 shots.

Contestants began to enter the range for the second time, now short of breath to load up their next 16 shots. Again, Joseph finished firing first, mounted his cycle for the third and final lap, with Bradley following shortly behind and Lewis, Drew and Becki behind them. A second round of shooting results were produced and showed that fitness was taking an impact, as Becki now looked to be the best shot, just dropping 9 pellets and Drew following closely behind, dropping 10.

As the third and final lap begun to come to a close, Joseph stumbled off his bike first once more. Tired, hot and exhausted, each contestant raced on to take their final round of shots. Joseph fired 16 rounds and was the first to cross the finish line. Bradley followed closely behind then Becki, Drew and Finally Lewis. The race was over!

The final scores were calculated and incredibly Drew had managed to constantly improve under pressure and won the final round of shooting dropping Just 7 shots of 16.

As each of the times were analysed and scores were checked over, everyone awaited in anticipation of an announcement. The time had come; the results were in and Bradley Lambert had manged to balance both speed and skill, to land an astonishing victory.

All in all, the event was a huge success, everyone enjoyed the day and we were able to raise £600.00 for the Air Ambulance Service, although donations can still be made at www. ontaregtrange.co.uk/biathlon. We would also like to mention Sparkey Detailing, PTS Gym in Northampton and Decathlon Northampton, who supported OnTarget in the Biathlon.