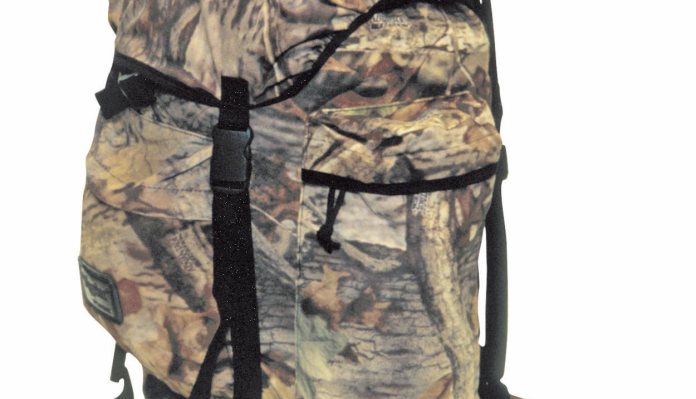 I’ve reviewed and now personally use a lot of shooting associated luggage from Napier of London, including their backpacks. Prior to this test, the ones I’ve used extensively have what you’d term a small to medium carrying capacity. However, if you really need to get ‘packed up’ the Ranger 4 and 5 models are the two largest – not including their clever Chameleon Backpack. Obviously, as you’d expect, all ‘Rangers’ share some similarities – mainly the soft, silent yet tough HUSHTEX material they’re made from but are very different in layout and overall design. Incidentally, despite what their numeric designations would suggest, the Ranger 4 has the larger carrying capacity of the two.

Interestingly, the ‘main body’ of the Ranger 4 has a 60 litre carrying capacity, which is the sum of not one, but two, separate compartments, configured as a 45 litre main compartment that sits directly above the 15 litre compartmental base, accessed by its own front zippered opening. In addition, it also has two large side pockets, a top flap pocket and one smaller front pocket. They all have heavy-duty zippered closure and offer an extra 13 litres of stowage, boosting its overall potential carrying capacity to approximately 73 litres.

The top of the main compartment has a double drawstring closure and secures down onto the pack with two adjustable canvas straps with ABS snap buckles. There are also a number of accessory straps for attaching items such as sleeping bags, camo netting, jacket, ghillie suit etc. Breaking from the norm, it doesn’t use the familiar moulded rubber base in its design as most Ranger’s do. It does however have a superior carrying harness consisting of a pair of wellpadded, adjustable shoulder straps with adjustable chest strap, adjustable lumber panel, adjustable waistband and sternum strap. All of which fasten securely with quick release ABS buckles. Even when fully loaded, the ‘full’ harness style carrying set-up enables the pack to sit quite high on the wearer’s back and the padding and lumber support take the weight off the lower back muscles, therefore make long walks feel less arduous.

The Ranger 5 has a 40.5 litre internal carrying capacity and does have the moulded rubber base; which is a very useful feature, as it allows the pack to stand up-right and obviously protects the bottom from water ingress even when ‘set down’ on water logged ground. It also has more pockets than most other models for external stowage. Before looking externally though, it’s worth noting there’s a handy internal pouch that’ll cater for items as varied as a buddy bottle, camera tripod/rifle bipod or a slim flask or water bottle. Also, the main internal compartment also has a draw cord top fastening waterproof liner. The outer of the pack features one mediumsized cargo pocket on the front, and two side pockets. All fasten with adjustable canvas straps with ABS snap clip buckles and over-flaps. The top of the pack fastens down with two similar adjustable straps and ABS buckles. The adjustable shoulder straps are very well-padded and a nicely sized canvas carry handle is integrated along the top for quick pick-ups.