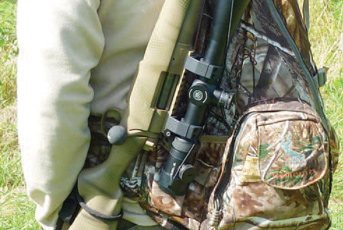 Carry That Load - In Comfort

Last month I looked at the Markhor Montería Evo II, a 28 litre back pack for the hunter, this month we have two slightly smaller packs but offering versatile carrying solutions in two quite distinct compact packages

If you prefer a smaller, lighter pack, then the Savanne Evo II is the logical choice. The build shares many features with the other packs, but the shoulder straps aren’t foam padded, instead being reinforced externally by a polymer mesh, while the back, which is foam-lined, shows grooves for air circulation rather than padded ridges. And even though each of the shoulder straps is equipped with a hose/sling clip, there’s just one pass-through - on the R/H side.

Stowage comprises three superimposed, separately-accessed compartments of progressively smaller size, the first two with internal pouches for a hydration bladder and documents/valuables respectively, and the third being described as a “binocular pocket”. There’s also a triangular hip pocket on each side.

An unusual feature is a heart-shaped flap on the outside of the pack. Secured with QR buckles at its top corners to the side compression straps, it’s designed to hold a jacket, making it easy to stow/access a top layer when you walk/halt, and facilitating drying between showers. The flap also mounts two sturdy webbing loops on the outside – but I’m not sure what they’re for!

My pick of the Markhor range is the Wapiti Evo II. Described as a “Bandolier” backpack, it has a triangular body extending at the tip into a well-padded shoulder strap that connects to a comfortable waist belt via a 3-way buckle with snap clips on both sides.

This allows you to sling it over either shoulder, keeping the other shoulder free for your rifle. For those who need to carry more than they can fit in their jacket pockets, or simply when it’s too hot for a jacket – not a common problem in the UK! Yet it enables you to shoot without having to drop your pack first - an excellent solution.

You can also access the contents of the pack without taking it off. Just unclip the buckle on the side the pack is slung, cinch in the remaining straps, and pull the pack round to your front. Both left-and right-handers will find this works well for access to the water-bottle holders, and to the two secondary compartments, which are top-opening, but southpaws will need to take more care when opening the main compartment, as for them the opening faces downwards rather than upwards, albeit at 45 degrees!

The Wapiti’s main compartment has a compression strap at each side – which can be used in conjunction with the corresponding bottle pouches to carry a tripod and a spotting scope - and internally features a zip-up valuables pouch at the tip and an open-topped divider for a hydration bladder at the back. There are also two secondary compartments: the first being similar in plan, with both a zip-up pocket and a divider; and the second having a quick-access flap with a magnetic closure. Finally, there is a pair of hip pockets, which happily offer enough space for a box of ammo, a compact camera or rangefinder, game calls, etc.

Overall, I was impressed by the design, build and styling of these backpacks. I like the wholly matte finish of the material, and the choice of colours, too, but the fabric wasn’t quite as rustle-free as I expected, and I note that none of the packs tested has more than a panel of black Cordura at the base to resist abrasion, so wear in this area might be an issue. Until that happens, however, their light weight, practicality and style carry the day.

For more information contact Garlands on 01827 383 300 or visit www.garlands.uk.com or www.markhor-hunting.com